John Searle writes that, as Chomsky and his followers showed, “in spite of surface differences, all human languages have very similar underlying structures.”  Steven Pinker details some of these similarities when he compares the structure of English with that of Japanese.  With a lot of detailed branching sentence diagrams, he shows that English is a “head-first” language, and Japanese a “head-last” language.  This means that in English phrases of all shapes, types and sizes, the “head” word –or the word that dictates how the phrase functions in the sentence appears at the beginning, and in Japanese phrases on the other hand, the head word is found at the end.  This conception go a long way in explaining the amazing rapidity and accuracy with which children the world over learn language: the universal existence and structure of phrases can be innate in humans, and children would only have to learn a few parameters of their particular language.

This theory is elegant, and thus highly seductive.  I have studied it far too briefly to even hope to notice and articulate any flaws in it.   That’s not what I intend to do in these following comments.  I am performing more an intellectual exercise than a real critique, so I ask for your indulgence: I’m wondering if there might be something missing, the result of the particular window through which Chomsky, Searle, Pinker and others chose to look at language.

My first humble question is what about German?  It is neither a “head-first” nor a “head-last” language, but one that does both.  When a verb phrase is part of the main clause of a simple sentence, the head-word, the verb comes first:

But when the verb phrase is part of a subordinate clause, the verb come at the end:

Ich denke, dass ich dich liebe.  Litterally: I think, that I you love.

The issue is probably mine; I probably don’t understand Pinker’s structures well enough, but it is worth pausing asking if the innate grammar works particularly well because of the two languages Pinker chose to illustrate it, or if it can say something profound even when applied to pesky languages like German where word order within phrases is not always the same.

A bigger issue I have is this: Chomsky’s asserts, summarized by Searle that: “Language doesn’t have any essential purpose, or it does there is no interesting connection between its purpose and its structure.  The syntactical structures of human languages are the products of innate features of the human mind and they have no significant connection with communication.” If this is true that what, if not communication was the complex, evolutionarily costly innate syntactical faculty inherent in the human mind evolved for?  Is Chomsky asserting communication is a byproduct of an unrelated brain structure?  It seems the simpler logic would argue for humans having evolved complex structures for the sake of communication, which is obviously useful and helpful to human survival. 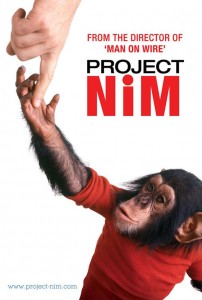 The faculty for intricate syntax is what sets humans apart from other species.  This is the assertion, well supported by evidence so far, of the Chomsky linguists.  A few months ago, I watched a documentary called Project Nim, which detailed a 1970s experiment with a chimpanzee, cheekily christened “Nim Chimp-sky,” which was trying to prove that chimpanzees, properly trained from childhood, have the ability to learn language similar to humans.  The scientist behind the project was a behaviorist (as portrayed by the filmmaker, he was also a irresponsible, arrogant, sexist fool… but that’s a separate issue).  After years of human-chimp bonding, and the clear evidence that the chimp had deep emotions, thoughts and wants he was both eager to and quite capable of communicating, the final results were analyzed and declared: Chimpanzees, despite the behaviorists’ hopes were not capable of learning language.

My first reaction to the film, and the results of the study, was confusion.  Weren’t the scientists missing a major point? Fine, Chimpanzees couldn’t learn grammar like humans, and this is a potentially important difference between species, but language as I have always understood it is a specialized and deeply refined form of communication, and ignoring the refined communication that the chimpanzee was capable of seems to obscure as much about the human mind as it reveals. I have this same question after the readings for this week. Chomsky and the other linguists who want to separate communication from language, well, maybe they can and should do this as an intellectual exercise to answer some particular questions, but should they loose sight of the very real connection between language and communication?