“Linguistics is a classificatory science.” This was stated by CF Hockett  in 1942 and is still applicable today. This quotation was included in John Searle’s  analysis of Chomsky (1972), who is perhaps the most widely recognized name in linguistics. Considering linguistics as a classificatory tool helps to better understand how humans have used language to communicate and interact. For instance, we can easily classify Non-English speakers from English speakers simply by observing the noise of verbal or written messages. Think of the last time you were browsing the aisles of a grocery store and overheard someone talking in a different language. Typically, we tune out other’s mundane conversations in passing but yet when we hear something different (i.e. another language), our brains are attempting to decode this new information source. What about in the learning environment?  When faced with the task of sitting through a class lecture, communication, language, and symbolic systems are all interrelated.According to Shannon’s theory, understanding entails, in theory, a completion of  Shannon’s Communication system.

This would mean that information (such as learning a new topic, in both written form and verbal traditions) needs to be transmitted  from instructor to learner (the receiver).  It is during this process where the importance of understanding linguistics and its place in communication is crucial. Students are only able to understand an instructor if he or she follows a proper set of rules that make sense in a linguist’s point of view, which would be through a procedural grammatical structure. For instance, if  a teacher said “History DC we’re today gonna learn about” to a class, that would result in a complete breakdown in the intended message getting through to the receivers as opposed to “Today we’re going to learn about the history of DC.” Although there are many branches in which one could take with the concept of linguistics, two main concepts I took away from this weeks readings involve 1) the “universality” of languages and 2) sociolinguistics, particularly identity formation. 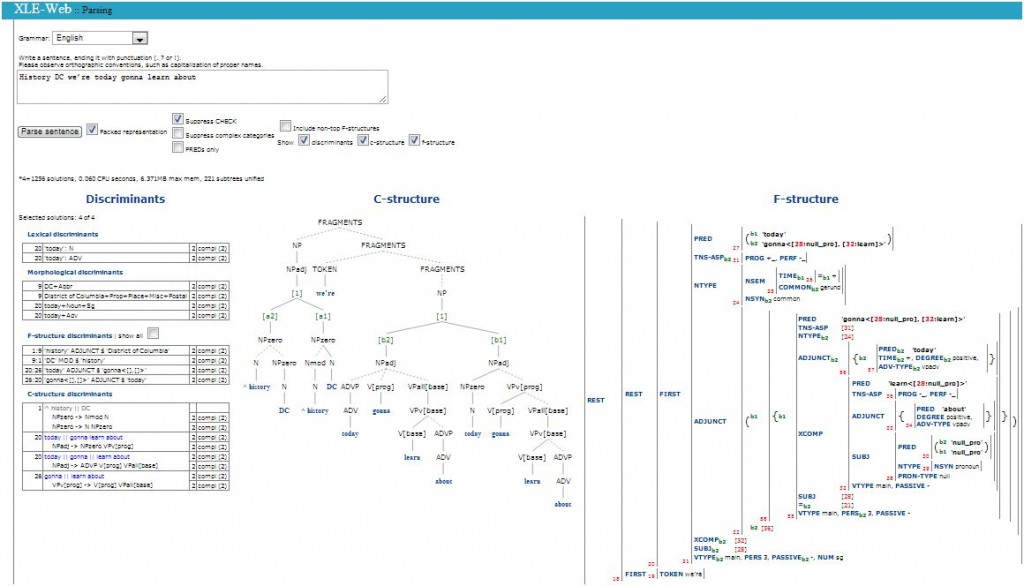 Sentence not following grammatical rules: Notice the occurrence of “fragments” 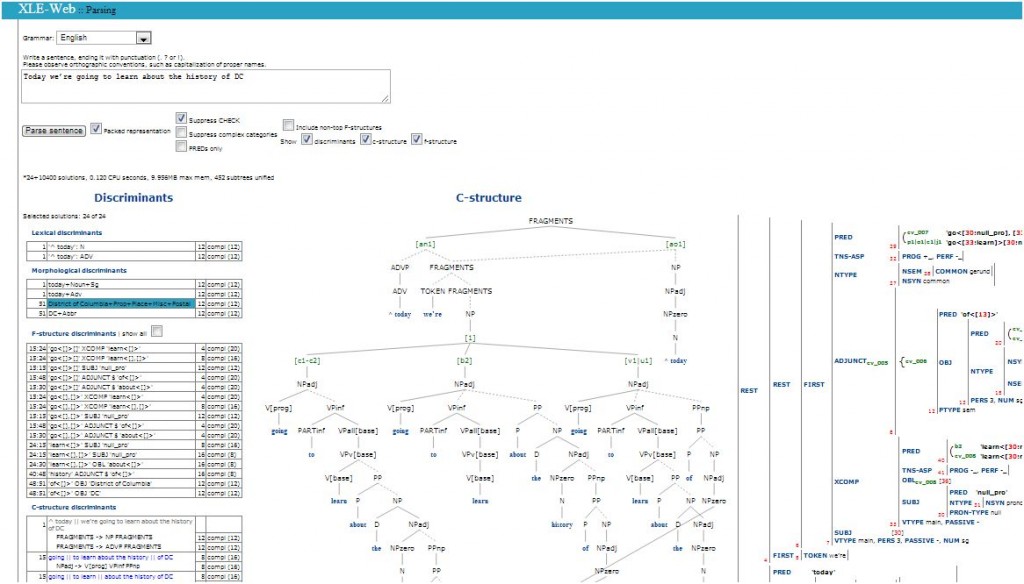 The “Universality” of Languages

Despite drastic differences among languages many researchers argue there they all have universal characteristics. Chomsky found value in the meaning behind syntax, or the “grammatical rule underlying the construction of sentences.”(1972). Although “Σήμερα είναι μια καλή μέρα” might not make sense to non-Greek speakers, [1] that phrase was not formed arbitrarily; chances are to create that set of words, it had to follow a general set of rules and structure that makes sense to its users (Greek speakers). This is where Chomsky comes in. He attempted to tackle the burgeoning question of how do we, humans, learn to talk in our natural context? [2]  By “natural context” I mean one’s own geographical locale or native tongue. A baby born in Russia will learn to use  Russian language, while a child born in the United States (and who presumably remains in the same location with English speaking parents) will grow up to learn English without being “told” to do so.  Chomsky counters empiricists’ beliefs that the mind is a tabula rasa (blank slate) and instead claims that it comes down to the child having “…the form of the language already built into his mind before he ever learns to talk” (1972). In his view,  we are all equipped with a universal grammar that is “programmed” in our brains. But what happens when we aren’t babies anymore? Searle critiques Chomsky’s theory noting that he fails to “see the essential connection between language and communication, between meaning and speech arts” (1972). Perhaps there is a breakdown in the universality of meaning between language and communication since, alas, they are not the same thing. According to Foulger, communication is not a “thing” but a process (2004).  So if we look at language as a process, there may be universality in the early stages of linguistic acquisition, but once individuals learn to associate their cultural context to how they speak, language goes back to being a narrow classification of what communication means.

The second linguistic concept that I wish to touch upon is sociolinguistics, or how the social characteristics of people shapes language (“WordNet”). To continue with the first concept, culture plays a significant role in understanding language and our identity that is tied to language. But what begs to be questioned is where media’s role is in all of this. Folger’s discussion in “Models of the Communication Process” notes that “people invent and evolve media” just as they do with language (2004). If that is the case, can this claim be supported by considering the culture of computers? Computers, as a medium of transmitting multiple forms of media, were invented by humans. And indeed, people have contributed to their evolution in past 30 years. One could argue that our social characteristics (inclination to computer use), has created an entirely new language system. For example, anyone who’s taken a web design course, may recall how learning this skill requires the learner to translate new meaning into their current vocabulary (such as the color black being equivalent to #00000 or the fact that the “{“ and “}” are more than symbols-  they indicate a set of rules for a web page). In my view, computer code is a language in itself – a social one that humans have created. This is an area that could use deeper analysis of combining the social influence of non-human devices on humans and what semantic/ linguistic implications they do (or do not) have on us.

In the field of contemporary linguistics, exploring how communication and symbolic expressions result in our understanding of languages is key. This macro-level overview of just two concepts of linguistics indicates how easy it is to jump from one area to another. Having at least a basic understanding of linguistics is key to delve deeper in the understanding of media theory and digital culture. Nearly all cultures have words for “media,” “communication,” and “information” but their meanings vary depending on the language being used. People’s reactions and social influences from the term “media” (and how it is created), differs drastically if you’re in North Korea or France. Attempting to understand media and communications requires just as much of a structural approach as is required for understanding language through the lens of linguistics.

[1] According to Google translate this means “Today is a good day” in Greek.

[2] When thinking what exactly a language is, it helps to first address the notion of “FOL”, or  Faculty of Language. FOL is simply  humans’ ability to learn a natural language, namely, the language that he or she was born into  is learned first (“Linguistics: Key Concepts”).