Throughout the many theories and models of communication and information systems, an often controversial argument is the process of transmission and communicative powers of the mass media. This medium transmits messages that are not only shaped by production, companies and institutions, but through the construction of language and perception that create the reality. In “Encoding/Decoding”, Hall points out that,

“A raw historical event cannot, in that form, be transmitted by a television newscast. Events can only be signified within the aural-visual forms of the television discourse. In the moment when a historical event passes under the sign of discourse, it is subject to all complex formal rules by which language signifies. The event must become a story before it becomes a communicative event.”

This excerpt of Hall’s points out a timely concept that frames the coverage of the 2013 Inauguration in relation to this week’s breakdown of the complexity of mediums and societal effects in communication and the way we process information. As an excited and incredibly fatigued attendee of President Obama’s 2nd inauguration, I found it surreal to turn on the TV or browse online the vast number of accounts and depictions the event I just witnessed on ironically enough on the TV screen of the jumbotrons at the National Mall. This reaches beyond the simple sender/receiver model of Shannon’s Mathematical Communication Theory and showcases how the digital age has provided not only new ways in contextualizing or receiving messages and data, but how it can change our understanding of information systems. 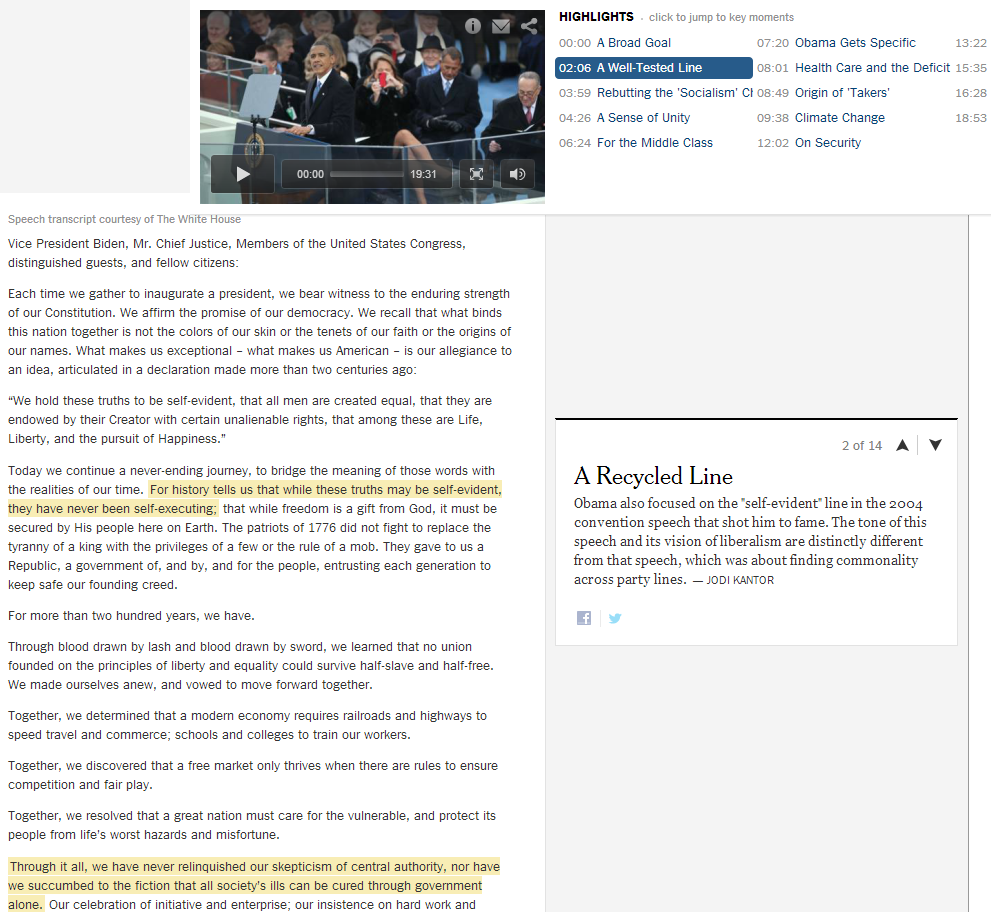 This interactive feature on the New York Times webpage NYTimes-President Obama’s Inaugural Address Dissected dissects and frames the meaning behind Obama’s speech,with the writings of several different NY Times authors in order to provide context and observance. In essence, it is giving the historical event a different observation or perception of reality by time snippet. Not only does this coincide with Hall’s notion of “complex structure of dominance” in which each separation of Obama’s speech is imprinted to readers in the view of the NYT as an institution, but it also provides examples of the use of language and symbolism to facilitate the understanding of media’s role in communication models.

This medium of interactive new media helps us to understand how more complex models of communication that effect the fabric of social, political and cultural creation. In Foulger’s “Ecological Model”, “communication between people (creators and consumers) is mediated by three constructs, with language used to build messages within media.” Barack Obama’s Inauguration speech created by him and a team of speech writers, is a message to communicate his plans for the next four years via words that are then transmitted through a loudspeaker to the public and then broadcast as well as written about. To the many people who watched the event on TV or read about it online or in the newspaper, this historical event was framed around the grand history and story of the United States as well as within the perception of Obama and his first term. Additionally, the idea that“communication is a symbolic process whereby reality is produced, maintained, repaired, and transformed” presented by Carey gives the reproduction of this speech within the context of the NYTimes feature a different understanding of the event than a person actually at the Capitol. It also raises the question of for those in attendance of inauguration of the effect of thousands of flags waving in the air on the jumbotron, providing the crows a medium of communication that reflects themselves live on the screen and to the millions of people watching.

In Floridi’s “Information: A Short Introduction,” he sets up a very methodical process of how humans consume and utilize data in even the most simple contexts. In relation to the production of media and the presentation of media, our ability manipulate and understand data has allowed us to become one with the information. He states that “ICTs have made the creation and the utilization of information, communication, and computational resources vital issues, not only in our understanding of the world and of our interactions with it, but also in our self-assessment and identity.” Today, ICT’s like cellphones are truly apart of self-assessment and identity which is why many people at the inauguration were annoyed to find the cellphone networks jammed due to the amount of people attempting to facebook, tweet, instagram and send text messages live to their family, friends and the world.

Even the first family is a product of the information age which is then framed and placed into reality through the media: 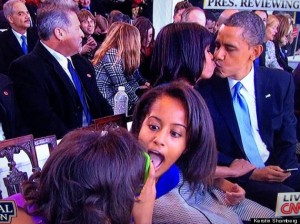 In a kind of meta-analysis of new media and old media, this photograph demonstrates the overall distribution of information systems and the new avenues of communication in the digital world. The photo, filmed on CNN, posted on the Huffington Post was then posted on my Facebook by a friend. It was created in a story that reflected a representation of the first family and generated numerous stories, creating a new communicative event.