Although most of Warhol’s art presents extreme repetition and mundane objects, they are never perceived by us in simple ways.  In his Death in America, Hal Foster describes Warhol’s art as being full of oxymorons –“referential and simularcral, connected and disconnected, affective and affectless” (Foster, 39).  Such so-called “Warholian paradox” is particularly shown well in many of Warhol’s portraits of celebrities.  I would like to talk about one of the portraits, Mao (1972). 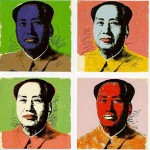 In 1972, Warhol produced a series of differently-sized silkscreens, all based on the massive portrait of China’s then Chairman, Mao Zedong, which still hangs at Tiananmen Square.  However, rather than reproducing the portrait exactly, he painted abstract or arbitrary colors on blank canvases before running a black-ink silkscreen over this painting. In this way, no two paintings are exactly the same (Cornita, 2011)

As in many of his other portraits, although he used the photographic print as the base, he never utilized all of the “photographic information.”   He totally ignored the symbolic conception of the original portrait, Mao’s political power and in China and identity as a communist authority.   Instead, by the use of highly contrasting colors and “feminizing” effect – which makes Mao look if he were wearing lipstick and eye shadow – he transformed the macho leader’s propaganda image to a portrait of a foppish middle-aged man.  Surely, these paintings, produced without any understanding of the symbolic meaning and identity, the original portrait just seems as a pure commercial product which makes fun of the notorious political celebrity in order to please the consumers, us who are in the opposite side of communists.

Of course, they might be more than just that.  According to Foster, Warhol’s use of compulsive repetition suggests “obsessive fixation of the object in melancholy” (Foster, 42).  As for Warhol’s series of repetitive pictures portraying traumatic events, disasters, Foster sees that the repetition plays a role to “reproduce the traumatic effect” (Foster, 42).  Likewise, the series of Mao’s portraits might be seen as emphasizing the political persona of Mao rather than deconstructing it, or, as Foster puts it, they “wards [the audience] away of the [political identity, meaning of Mao] and opens [them] out to it” (Foster, 42).

Also, the diversity in colors and sizes in the portraits might reflect the idea that our symbolic conceptions of Mao cannot be generalized, which contradicted to what the original portrait was intended – the universalization of Mao’s image as politically authoritative.  In the end, we might interpret Warhol’s portraits of Mao as observing, reflecting, questioning, challenging, and ignoring the socially constructed meaning of “Mao” at the same time.