Intertextuality, as defined by Julia Kristeva, dictates that: “every text is from the outset under the jurisdiction of other discourses which impose a universe on it (Chandler 1994).” Michel Gondry’s Be Kind Rewind exemplifies this postmodern notion of intertextuality, largely in the form of pastiche, to touch on poignant and often humorous themes of art, nostalgia, and collective memory. 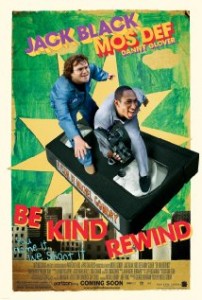 The film is set in the small town of Passaic, New Jersey; once a thriving cultural hub—Gondry appropriates the life and history of Jazz musician Fats Waller, actually a Harlem native—now a dilapidated town suffering through the early stages of unwanted gentrification.  The Film’s heroes Jerry and Mike (played by Jack Black and Mos Def) are forced to film modified versions of Hollywood blockbusters when a magnetized Jerry accidentally erases the inventory of the town’s only remaining video rental store. The pair cobble together drastically altered versions of hits such as The Lion King, Driving Miss Daisy, and 2001: A Space Odyssey which become very popular within the Passaic community. In order to explain away the odd camera work, the stranger costumes, and the shortened length of each film, Jerry explains that they are produced in Sweden and therefore have been “Sweded,” a process that is both expensive and time consuming. 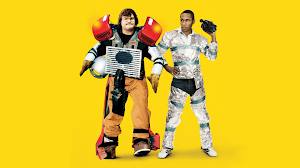 Though filmed as a comedy, Be Kind Rewind is a serious examination of the importance of history and collective memory. “Sweded” films are representative of society’s attachment to and collective interpretation of narrative. They draw upon the work of famous (and wealthy) storytellers and reinterpret the main themes in a way that is accessible to the community as a whole. These striped-down re-makes still honor the intent of the original works, but, due to their simplicity, are more appropriate for the Passaic community which exists in the shadows of Manhattan much in the way a “Sweded” film might exist in the shadows of Hollywood.

A  “Sweded” film also serves to empower the amateur; a big budget, and production staff are unnecessary and excessive. Rather, the individual is now empowered and can draw upon and reference iconic works and create their own distinct and relevant interpretation. They can be, as Gondry argues “stockholders of their own happiness (World Socialist Web site).” This concept of course, can be seen throughout modern remix culture in the form of memetics. As an original idea is passed along, it is given new life, and occasionally new meaning, with each new interpretation. While the original work remains untouched, new versions remain in circulation and serve as the foundation for a community of “ordinary” individuals who have invested their own creativity in the production of an alternative narrative.

Gondry capitalizes on this idea of memetics by created a “Sweded” version of the original trailer for Be Kind Rewind. He even encourages viewers to create their own “Sweded” takes on Hollywood hits and allows them to be posted to the Be kind Rewind Youtube page.  Gondry works to breakdown the idea that there is only a passive relationship between a viewer and a piece of art. Rather, as is argued in the study of intertextuality, there is room for an active and dynamic relationship between creator, work, and audience.