This week’s readings addressing dialogism, intertextuality and appropriation provided the platform for my understanding of how texts are inter-related – everything from the advertising I see in my magazines, to the novels that I read for a seminar, to the artwork that I pass by everyday in the museum that I work for. As I was trying a grasp on the larger concepts that were proposed this week, I found that I was best able to comprehend these texts through the work of a Pop-Artist Roy Lichtenstein.

Roy Lichtenstein, a world-famous pop artist from the 1960s, created paintings that were heavily influenced by popular culture – both contemporary and historical. Lichtenstein’s work draws upon the “popular advertising and the comic book style” of the 1950s and early 1960s. The best example of intertextuality within his body of work is his painting Drowning Girl (1963). Drowning Girl depicts a crying woman who appears to be in the process of being swallowed by turbulent waves. Despite her immanent death, her focus is solely on her sorrow. In the top left corner, Lichtenstein harkens to the contemporary comic panel with a text bubble that states: “I DON’T CARE/I’D RATHER SINK THAN CALL BRAD FOR HELP!” 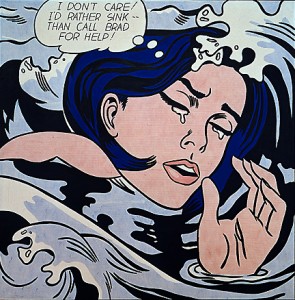 Julia Kristeva defines intertextuality in terms of horizontal and vertical axes, the latter referring to the relationship that a text has with other pre-existing texts (Kristeva). Examining Drowning Girl in terms of this vertical axis, we can see that Lichtenstein is both accepting popular culture and negating pre-existing artistic expectations that have their foundations in classical painting. Lichtenstein does this by using a painting technique called Ben-Day dots to create the illusion that the image is “mechanically reproduced” (Wikipedia). Understanding this painting as text, we can also see how it is related to the “already-written” (Barthes). Drowning Girl is heavily influenced by a comic panel from 1962 from DC Comics, however, the most interesting artistic reference I believe that Lichtenstein makes in his painting is a reference to nineteenth century Japanese print making (Wikipedia). If one examines the waves that encompass the woman in Drowning Girl and compares them to the extremely well known print by Hokusai The Great Wave of Kanagawa, one will notice striking resemblances in between the two. 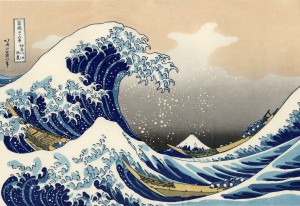 This painting has many layers of complexity, but I believe in terms of what we are discussing there are three points that need to be addressed. First, Lichtenstein was famous in the 1960s for heading the “new” Pop Art movement however many criticized him for not creating anything original and drawing solely from pre-existing artwork. As to the latter critique, we can now (after this week’s readings) look at all art and understand that nothing is truly “original” and thus Lichtenstein’s art can be seen as progressive rather than regressive. Secondly, the question arises asking as to why the artist chose to pull from comic and print art. Is the artist making a comment on the increasing commercialization of 1960s America? Is he remarking on contemporary critiques of his artwork by connecting his “unoriginal” work of art to probably the single most circulated Japanese print in the United States? There are most likely several other explanations as to why Lichtenstein chose both his subject and his style of painting when creating Drowning Girl, however I believe that the questions referenced above were at least relatively influential in his artistic process. As Chandler notes in his “Semiotics for Beginners” when texts such as this one “allude directly to each other…[it]…it is a particularly self-conscious form of intertextuality: it credits its audience with the necessary experience to make sense of such allusions.” Third, as Lichtenstein’s piece is a painting that draws upon the influence of both narrative and print, Drowning Girl reflects intertextuality by crossing the “boundaries between formal frames” (Chandler).

This week’s readings aided me in my understanding of how all texts of all mediums of our culture are constantly taking pre-existing forms and simply re-molding them into something with a slightly different shape. The author, as Barthes strongly emphasizes, is not a creator but rather a mediator of all texts that have come before him and he collaborates with both contemporary society and historical texts to create the next artistic product.