One of the primary features of postmodernism in aesthetic production including artworks, films, music, and, literature is the use of intertextuality.  There are numerous great examples of intertextuality; Peter Webber’s film (2003) and Tracy Chevalier’s novel (1999) of the same name, Girl with a Pearl Earring, would be definitely some of them.  The film and novel both give fictional accounts of the girl depicted in a 17th –century painting of the same title by Dutch painter Johannes Vermeer; more exactly, as known well, the novel came out first; then the film was made based on it.  The painting features a mysterious girl with a turban and a pearl earring; but her identity has not yet been determined (Wikipedia).  Thus, the plot of both Webber’s film and Chevalier’s novel is all about Chevalier’s own interpretation of the famous mysterious painting.

The plot takes place in the Netherlands in the 17th century.  The main character, a young girl named Griet, comes to the city of Delft to serve the Vermeer family. After a critical moment in her first encounter with Vermeer, he begins to look at her as the only person in the house who can understand his art. He sees her as someone who has a somewhat artistic soul and uses her as a model for his painting.  He develops a complex emotional relationship with her that causes his wife to feel jealous (Wikipedia).

According to Kristeva and many other theorists, “intertextuality refers to far more than the ‘influences’ of writers on each other” (Chandler, 2013); this is well evident in the relationship among the painting, film, and novel of the same name, Girl with a Pearl Earring.  First of all, it is obvious that in her novel, Chevalier does not merely refer to Vermeer’s painting but imparts an entirely new meaning to it with her own subjective perspective and imagination.  Likewise, Webber’s film is also not a mere media representation of the painting and novel.  The quiet and slow scenes of the film which are just as captivating as the canvas and the reversed method of seeing the art-making process which allows the audience to become already familiar with the painting before it is finished gives a special tone to the movie. The film successfully draws the audience into the atmosphere of the period and gives them a different perspective of that piece of art: it leads the audience to focus on not only the art itself and the romance behind it but also the social norms, economic situations, people’s lifestyles, and personal fears and struggles in a growing process of one young girl in the 17th century Netherland. In this sense, as Chevalier’s novel does, it also adds a new meaning to the painting particularly within the audience by creating and manipulating their appreciation and impression of the painting.  More importantly, it helps the 17th century painting become popularized” among the contemporary mass.  It has, in fact, encouraged the audience to read Chevalier’s novel, put the image reproduction poster of the painting on their walls, or even travel to The Hague, where the painting is held in (Brussat).  Whatever their choice is, it would always take them back to the painting; this can be seen as blurring the line between high and popular culture. 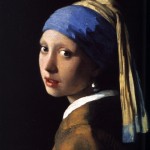 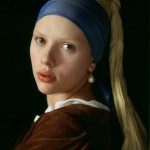