Memes are social and cultural phenomena that have been present for the last few years and have jumpstarted many online website and communities, such as 9GAG, Memebase, Meme Center and many more. After reading this week’s texts I wanted spent a few lines trying to apply Peirce’s ideas with something that would it make it more accessible and digestible to a wider audience, and that’s why I will use some of the most recognizable Memes on the Internet to see how they work as Icons, Indexes and Symbols. First off, it is important to have clear what are the characteristics of each of these modes of relationships. Chandler, using Saussurean terminology, describes the Symbol as the mode in which the signifier and the signified do not share any “real” characteristics, but are actually connected through convetion. Regarding the term Icon, he establishes it should be understood as the mode in which signifier resembles (has a likeness to) the signified and not by convetion. Finally, Indexes can be explained as the mode where the signifier is related directly to the signified (2007, 37). It is important to also understand that each of these are not mutually exclusive, so it is possible to find them all in a sign, in different degrees and relationships. To help us understand this, Parmentier talks about Peirce’s ontological triad of Firstness, Secondness and Thirdness (1994, 7). To understand this all be using the example of The Success Kid meme. 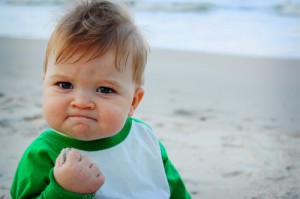 As we go through the image that represents The Success Kid, we can identify different hierarchical relationships and positions (Index, Icon and Symbol). As a first, it is possible to see the qualitative possibilities, with this I mean that while watching the photo, it is possible to understand to little kid in a certain position (it was later revealed by the parents that he was eating sand and not celebrating and achievement). This would be understood as an Index. As we go a step further (secondness), the face of the kid and the position in which he is holding his fist resembles and creates a feeling in which one would think of success. Finally (thirdness), the whole image, the meme, does not just represent that unique moment, but rather a social situation that can be extrapolate to other similar situations, creating rules, laws and representation on how and when to use this meme. As we see, each of these stages of signs, era connected live within each other.

On a final note, I only wanted to remark that memes can help us see how signs function and how they change over time. After few years of visiting Reddit and 9GAG, it has been fun to watch when new memes emerges and how different people uses them, sometimes changing their meaning completely an creating new ways to communicate within each other. 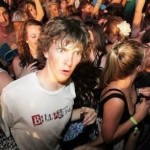 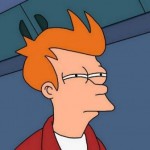 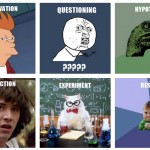 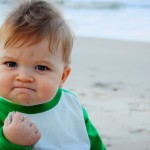 © 2006-2014
Course files by Martin Irvine are licensed under a Creative Commons Attribution-Noncommercial-No Derivative Works 3.0, United States License. All educational uses permitted with attribution and link to this page or appropriate pages. Cited and quoted sources are the property of the copyright holders.