From the reading Linguistic, Language, and symbolic cognition (Irvin), generally, the “natural language” is defined as human languages acquired from the community where they were born in or live in. Language is an inherent talent, a unique characteristic of humans that distinguishes humans from other species. It is composed of different elements: words, grammar relations, and meaning. How the features work is not like a separate layer; rather, they work coordinately with reflectivity. Because the words are not blank, there are already syntactic features adding in it (Irvine).

Moreover, it also discussed “Universal Grammar” in both readings and the video. Chomsky’s Universal Grammar theory believes that language ability is determined by human genes and is innate. No matter what language you speak or where you are on the earth, as long as you are a human being, you have a unique and universally applicable grammar in your mind. All human languages can be abstracted into such grammar. It also explains why children can learn languages fast from a very young age, even with poor input. However, I have a question here, if the universal grammar is an inborn gift, why people find it is harder to study a second language in adulthood, even adults’ brains are more developed than children? Does it mean this gift will disappear in adulthood?

Besides, based on Chomsky’s theory, through the recursive semiotic system rules, all human language combinations can be generated from the basic words, including existing sentences and potentially infinite sentences. I am wondering that if contextual meaning contributes to this infinite potential of language? There is an example at the end of the reading: He is as cold as ice (Irvin). Even the words are the same, but it has a different meaning under different conditions. As for me, in different situations, even these sentences have exactly the same words, I won’t consider them the same sentences.

In the video, the professor mentioned one hypothesis: the Sapir-Whorf Hypothesis, which demonstrates languages can influence people’s perception and understanding of the world. I think it indicates the relationship between languages and our way of thinking. The book Metaphors We Live By talked about a fascinating language phenomenon, which is a metaphor (George Lakoff and Mark Johnson). For example, time is like money, which is a simile. Time is money, this is a metaphor. The author of this book believes that metaphor is not only a rhetoric but also our way of thinking. When we say that time is money, it is not only a rhetoric, but also reflects our thinking. We would say spend time, save time, waste time, and also say spend money, save money, waste money. Time and money are almost in the same mode of thinking here. Therefore, language is a better way to understand the brain, just like a specific programming language should be understood when studying a system.

My sentence: They killed Kenny！ 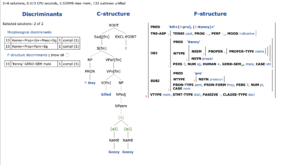 (i.e. what language did your parents/guardians speak to you when you were a newborn? What was the language of the cultural community you were born into? etc.)

– Combinatoriality: rules & procedures, building blocks, you need to combine thing in order to form something

– Discrete Infinity, Creativity, Productivity: “combinatorial function”, myriad of possibilities of what you can form

– Intersubjectivity, collective cognition: shared, does not belong to one person but also could not constitute a language if only one person spoke it (excluding languages that are unfortunately dying/getting lost) 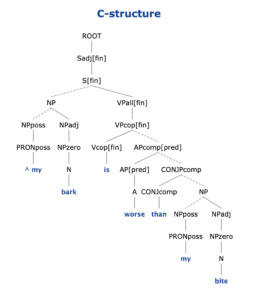 It was interesting comparing the results from the XLE-Web parser and seeing how deep you can delve into the analysis of a sentence. I added the sentence “My bark is worse than my bite.” (Grandmother Willow – Pocahontas) and I was surprised to see a different break down than I would have imagined based on my interpretation of the video. However this speaks to the complexity of language and testifies to its aforementioned features. I was surprised because you can interpret language in so many different ways because of the plethora of combinations that can occur/be formed. Many times, especially when it comes to our natural language, we don’t often question the detailed analysis of the sentences and phrases that we form when we speak. Anything from our intonations to our tone of voice, to vocal expressions will usually naturally establish themselves in specific circumstances, moments and occasions. The same sentence or meaning of a sentence can be expressed in a variety of ways that allows for the syntax, grammar and other characteristics of the specific sentence to shift.

For example in “My bark is worse than my bite.” you can also consider both “My bark” and “my bite” as two distinctive NP where “My” and “my” are the determiners and “bark” and “bite” are the nouns. The “is worse than my bite” would be the VP with the verb being the “is”, and so on and so forth, with the possibility for that to be broken down into different language components and sentence properties. 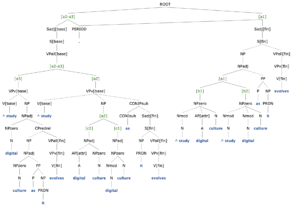 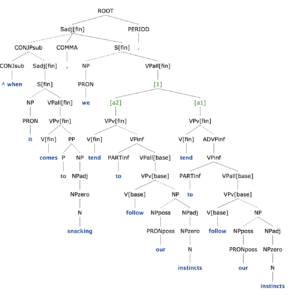 “Age is foolish and forgetful when it underestimates youth.” – Dumbledore, Harry Potter and the Half Blood Prince.

“When it comes to snacking, we tend to follow our instincts.” – Second Nature, Wholesome Medley packaging description slogan.

Some more examples of the different combinations of a sentence’s grammatical properties. It was interesting trying to break these down following the Tree Diagramming Practice video before seeing the “results”/breakdown on the XLE-Web parse and different notions can form different views even in language.

Pinker, S. (2012). Linguistics as a Window to Understanding the Brain. Youtube Video https://www.youtube.com/watch?v=Q-B_ONJIEcE

It was interesting looking at the XLE-Web site, to better understand how to parsing sentences works.

I typed in: “Hello all, I am Alie and I am learning about a new system.” to the program. XLE-Web provided the following solution when parsing my sentence: (F-Structure was cut-off at the bottom): 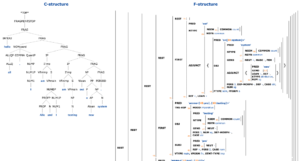 This introduces a new system of linguistics, complicating what we understand language to be. Wikipedia helped to begin to understand the syntax of parsing, but it is an extremely intricate and complex field. Natural language acquisition (denoting natural language) bypassing the complications of language because at a young age we seamlessly catch on to the rules and mechanisms of our native tongue. Studying language is important because the concepts of the various branches of language are applied to many other fields (Irvine).

*Had technical issues with XLE-Web on loading the parsed sentence (Taking over 2400 seconds to process the parse).

In defining the nebulous nature of language, we use a plethora of factors in identifying types of human language. The natural language for that matter is the acquisition of common understanding in human interaction and communication. This is simply by luck in what community we are born into and learning to be “attuned to the patterns of sounds and grammar in the language community we are born into”[1].

Steven Pickner fuels the notion that language is words as well as rules (grammar). Words are what “memorized arbitrary pairing”[2]. We have conventionally trained ourselves that sounds and meaning paired together are what define the fruits of life. Enabling a language is concurrent with the arbitrary nature of identifying symbolic tones, units, cognitive beliefs, etc.

How can we tie this more into computing?

Side note: it is fascinating to conceptualize how we have trimmed all these massive ideas, concepts, into symbolic words (by illustration i.e. calligraphy) and more so, how we turned complex concepts all into binary code, transferring language.

[2] Steven Pickner, “Words and Rules: The Ingredients of Language”

“The major perspective we adopt in this book regards a language as a cognitive system which is part of any normal human being’s mental or psychological structure.” (Radford, et al, 2009)

“In linguistic terms, a “natural language” is any human language acquired ‘naturally’ by being born into a language community. “(Irvine, 2020)

According to Stevin Pinker, language includes words and rules. From my personal understanding, a language is a specific phonetic system conveys meaning and can only be understood within the same cultural context. 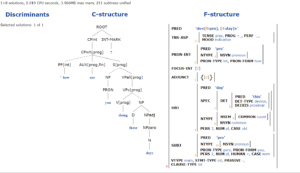 It is very interesting to find out that we are speaking according to particular rules and sequences without actually knowing it. Also, I find that human being has the instinct of reordering words according to the rules that imbedded in our heads, which enables us to interpret meaning of a sentence without correct word orders. For example, ”吃了吗您？“ is a way to greet people in northern areas literally meaning “Did you eat？” (“how are you”, in fact”). However, the correct sentence order should be “您吃了吗？“(the verb “吃” should be placed in the second position). When people are saying that without correct order, everyone understands. When I am speaking English, sometimes I don’t follow the particular orders but native speakers can always understand. These are proofs of a cognitive interpretation system that related to Broca’s area and Wernicke’s area.

What is natural language:
What is a language
Essential features of language:
This is the Tree Diagram I draw followed the instruction of Tree Diagramming Practice video: 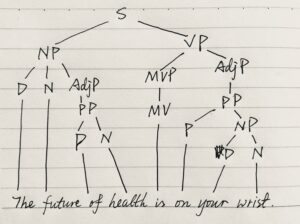 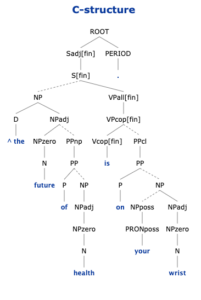 I am really bad at grammar. Even now, I still can’t tell the attributive or predicative of a sentence. Surprisingly, I can speak fluent Chinese without knowing these rules. For me, it looks like a superpower I never noticed before, just like human beings weren’t aware of the existence of air for a long time. And the mastery of language rules is not entirely acquired. As the reading (Linguistics: An Introduction, p8) mentioned, grammatical correctness is not parent’s target when teaching language. But every little baby scans the expression rules of the people around and almost spontaneously master the language that the most advanced computer could not crack!
After the readings I was still confused and captivated by human’s ablitiy of learning language. So I want to discuss more on:

Words and Rules: The Ingredients of Language

Pinker, S. (1999). The Infinite Library. In Words and rules: The ingredients of language.