In the area of linguistics, the debate whether language is a “master symbolic switch” that triggers the development of other symbolic systems in human minds or it is just an implementation of a comprehensive symbolic system pre-installed in the brains is still not settled. Thus, applying the terms and models of linguistics to other meaning systems like visual and audio systems seems to be a way to testify the similarities and differences between the language and other media in a semiotic approach.

In the study of linguistics, language, which is a huge and complex system can be divided into a number of subsystems like phonology, lexicon, syntax, semantics, pragmatics and so on. Those subsystems interfaces with each other thus form a language, by which human being can communicate meanings to each other, as is stated in the parallel architecture developed by Ray Jackendoff. Those subsystems also form a hierarchy from microcosmic to  macroscopic that governs delicately the whole system of a language.

Other symbolic systems also seem to have such hierarchies. Some may argue that painting, which is obviously a visual symbolic system, has shapes and colors as its “lexicon”, ways of join those basic elements as “syntax”, and meanings as “semantics” or “pragmatics”. Movie fans would say that movies can also fit into the model of language–shots and scenes form lexicon, and montage is an reflection of “syntax”, as well as the meanings that directors and producers try to convey can fall into the domain of either “semantics” or “pragmatics”.

But in my opinion, whether a symbolic system other than language can fit into the terms of language is based on a important criteria–can this systems produce infinite meanings using finite elements it has, which is one of the implications while using linguistic models for other symbolic systems. Unfortunately, those two example I put forward in the last paragraph do not meet this criteria. In painting, shapes can be arbitrary and a little change of hue can result in a different color. Thus, unlike language with finite lexicon and finite set of syntax, the basic elements for painting is infinite. Movies, as animated paintings, are even more complex a system that painting.

However, whether other symbolic systems can be put into the model of linguistics still remain to be seen. (I don’t think I can comment on the audio system for I am a way-below-average consumer of music.)

It may occur to some people that written Chinese with complex characters is to some extent like paintings. How can that be a language? The truth is, although some Chinese characters do simulate the shape of some objects while some others have something to do with pronunciation, the types of the strokes, which is  the basic elements like letters in English words, are finite.

Before I begin to attempt at defining language, it is notable to point out that a language can be natural, programmable or even visual. Therefore while the differences between those types are plenty, there does seem to underlie a string of common features that make them function the way they do, more often than not, for the same purpose of expressing or communicating complex thought. From a cognitive perspective, a language is a symbolic system shared by two agents that is typically used to transmit information. For a meaning system  to be a language it must contain some innate properties. Firstly, it should house a lexicon that determines language competence in some degree. Secondly, it must necessitate the usage of a formal syntax. Thirdly, the structures within the system must be capable of generating an infinite variety of meanings. Last but not least, the system must be familiar to more than one individual to properly function as a “language”. One immediate implication of employing this combinatorial feature to understand other symbolic systems such as a programming language lies in the fact that we simply cannot explicitly tell computers to do anything we want. This is common sense today. If this continues to hold true for a long time ahead (hypothetically), doesn’t this unique feature of language solely belong to human cognition?

It is commonly understood in Film Theory that although viewers are typically not literate in the grammatical conventions of film, they can understand the intentions behind cinematographic choices in a symbolic sense. Assuming that a movie (visual symbolic system) works like a language, what would its syntactic structure look like? We can arrive at a close understanding of the conventions governing film by way of a structuralist point of view. According to structuralism, we can analyze how films convey meaning through the arrangement of shots, scenes and sequences. In this way, movies have a temporal component to how they express thought similar to how natural human language has a phonological component. Shots in a film can be juxtaposed in a particular way such as pace, transition or direction so as to specifically convey a supplementary meaning on their own, independent of the content (formal elements) in them. This is best exemplified in the Kuleshov Effect which was named after Soviet filmmaker Lev Kuleshov upon his famous experiment in which he assembled three distinct shots, one of a man with a blank facial expression, a bowl of hot soup and an attractive women in different orders only to realize that each sequence told a different story even though the shots were the same.

The above example thus reiterates a common hypothesis in linguistics that  the generative capacity of language comes from syntactic derivation. At this point, two major schools of thought in conception of grammar dominate the field of linguistics namely generative grammar and constraint-based grammar.  I’m also satisfied with Jackendoff’s description of the linguistic approach to studying language which was hard to grapple with in the beginning. “The most rewarding way to investigate language is still from the mentalist point of view—focusing especially on what it takes for a child to acquire facility in a language.” Lot of the challenges in the scientific study of language seem to rely on the largely under-charted territory of interfaces. Finally, it also strongly appears to me that language is just one means that the human brain is accustomed to, in interacting with the knowledge of the world, although I am uncertain of the veracity of such a bold claim.

This week’s topic filled my mind with theories examples which I very much like to test.

#Basic questions: What is language and what is A language?

Language, as in Steve Pinker’s perspective, is not written language, not proper grammar, not thought. These three exclusions seem to fit Ray Jackendoff’s and Andrew Radford. So refer to the required readings, I’d like to think language as a conventional rule that generates meaning in a) phonological structure (sound), b) lexicon structure (words), c) syntactic structure (grammar), d) semantic/conceptual structure (dictionary meaning) and e) pragmatic structure (f-language).

A language possesses its own rule in these five structures, which make every language both unique, yet fits the basic features of human language.

#Further probe: language features in the study of music style and A.I.

This video shows a 20-style-cover of Linkin Parks’ hit song In The End. The singer sang the song in one language and didn’t even change the lyrics (which means the lexicon, syntactic, semantic structure stays unchanged too), so how did this song sound so different in different styles? Apparently, different singers have their own rules in prosodic structure and segmental structure and so on, which distinct them from each other. Maybe Linkin Park likes to put stress on nucleus segment while Michael Jackson didn’t. Or maybe the Queen likes pronounce [i] like [ae:] while others don’t (just saying, since I hardly know anything about them). But that difference doesn’t make them sing in different languages. Like the notions of type and token we discussed in the last two meetings, these are just musical accents.

So, how does language features exist in different singer styles?

In fact, recent news confirm me that this is no longer a rootless thought, since A.I. has been making it easier to imitate different musician’s style, or even inventing its own one. How? By applying these format rules I guess.

I want to recommend a website called http://www.etymonline.com/ , an online etymology dictionary for tyros. I find it interesting reading how these words which we used everyday date back to eras so far from now and evolvement step by step. Seems every word is a book of human evolutionism itself. 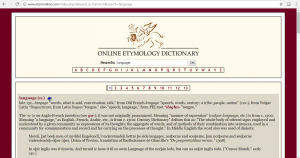 Language is a system framed by some dynamic customs to express thoughts, presented in the form of sound, sometimes also of writing. The dynamic customs consist of following levels: phonology (sound), syntax (grammar), lexicon (words) and semantics (meaning) and some others, which integratedly participate in the process of conveying every single thought between people. One important research topic in linguistics is how these levels trigger and combine with others.

A language is a certain set of dynamic customs, which rules how each level work and how they work with others.

For example, on phonologic level, a language has certain number of vowels and consonants, and to utter these, the position of tongue, the shape of lips, whether aspirated, whether nasalized, whether change to fit another and so on. The number of syllables human beings can utter is countable, limited by biologic features, but considerable already and every language only use a part of them.

Theoretically, these syllables have infinite combinations, but again, only a part of them can be recognized as “morpheme”, the minimal meaningful unit in a language. On morphologic level, these minimal meaningful units are combined into words appearing and analyzed on syntactic level. Syntax regulations include categories, orders, etc. The function in a sentence and the formation relationship with others define a word syntactically (like a three dimension coordinate system, x-axis stands for “Noun” feature, Y-axis stands for “Verb” feature, and z-axis stands for “phrasal” feature (which i don’t understand however) (Jackendoff PP28)).

There are also rules of other levels in every language. What should be emphasized are, when generating meanings, all these levels are not established hierarchically, but more likely in parallel. Second, some levels may weigh less, or even none in some languages while very important in others. For example, one way to classify all natural languages is into two groups, analytics and synthetic language, depending on how many morphemes per word. Languages in the former group, represented as Chinese, has no inflection at all and very little situation where single morpheme can’t be used. So for Chinese, morphologic level will have far less meaning than Japanese or French in communication.

Music structure seems most similar with natural language. Jackendoff has mentioned a little in his book (PP 28). Besides that, my understanding is a three-level structure. First is “note” (syllable) level. Two variables, frequency and value define every note. After that is “beat” (word)  level. One note or several notes or the rest of duration of a former note compose a beat. With a set of beats, a piece of melody (sentence) shapes. In music world, different styles act like different natural languages, and every language has a set of customs make people easily figure out which type of this piece of music is. For example, compared to classic music, jazz uses a lot of syncopation and half-tone, which can be regarded that jazz requires a special “morphology rules” to compose a beat with notes of specific frequency and value.

Copyright and uses of this site

© 2016
Course files by Martin Irvine are licensed under a Creative Commons Attribution-Noncommercial-No Derivative Works 3.0, United States License. All educational uses permitted with attribution and link to this page or appropriate pages. Cited and quoted sources are the property of the copyright holders.