Simply Raw: Reversing Diabetes in 30 Days is a documentary film produced in 2009. It conducted an experiment on 6 diabetics to see how turing to raw food diet can affect diabetes. Watch the trailer here:

During the 30 days of the experiment, six Americans with diabetes are required to completely follow the raw food diet that consists entirely of vegan, organic, uncooked food. Their progress and health are monitored by a team of medical staff.

According to the film, The participants showed reduced insulin dependence and blood-sugar levels. The film therefore claims:

This fact-checking project tries to examine the liability of the claims made in the film and therefore evaluated the credibility of the final statement.

The raw food diet is based on the belief that the most healthful food for the body is uncooked. Typically, about 75 to 80 percent of what you eat each day will be plant-based foods never heated above 115 degrees Fahrenheit. (Very few people follow a 100 percent raw diet.) Most followers are vegan, but some choose to consume raw animal products, like raw (unpasteurized) milk, cheese made from raw milk, sashimi, raw fish, and certain kinds of raw meat. 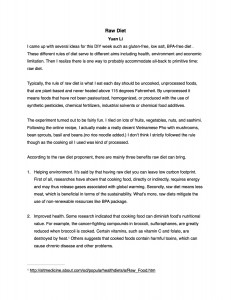 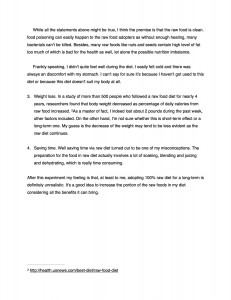 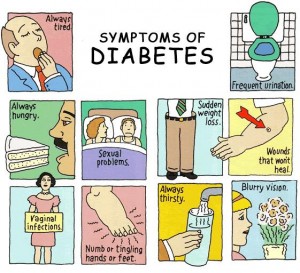 Diabetes is one of the most rampant diseases of our time. According to the American Diabetes Association, in 2012, 29.1 million Americans, or 9.3% of the population, had diabetes. [1] In fact, diabetes is growing at a fairly fast rate. A study completed by the CDC & Research Triangle Institute concluded that If recent trends in diabetes prevalence rates continue linearly over the next 50 years, future changes in the size and demographic characteristics of the U.S. population will lead to dramatic increases in the number of Americans with diagnosed diabetes. [2]

Diabetes is a problem with your body that causes blood glucose (sugar) levels to rise higher than normal. This is also called hyperglycemia.  According to the current mainstream approach, the major goal in treating diabetes is to minimize any elevation of blood sugar (glucose) without causing abnormally low levels of blood sugar.

Type 1 diabetes – the body does not make insulin. Insulin helps the body use glucose from food for energy. People with type 1 need to take insulin every day. Type 1 diabetes is treated with insulin, exercise, and a diabetic diet.

Type 2 diabetes – the body does not make or use insulin well. People with type 2 often need to take pills or insulin. Type 2 is the most common form of diabetes. Type 2 diabetes is treated first with weight reduction, a diabetic diet, and exercise.

WHO says the common consequences of diabetes are:

To begin with, let’s get familiar with two key words in the film: “Diabetes” and “Raw Diet”.

Center for Disease Control and Prevention

Quote from the American Diabetes Association: Diabetes is a chronic disease that has no cure. 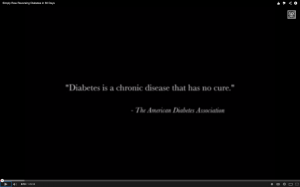 While I cannot find the original quote from the American Diabetes Association, I did see their mission posted on the front page of their website: To prevent and cure diabetes and to improve the lives of all people affected by diabetes. It’s interesting then, why the American Diabetes Association claims that there is no cure to diabetes when they set their mission as finding one. 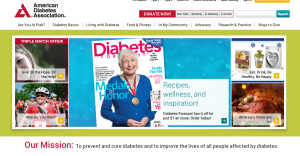 While the “chronicle” part can be justified as the WHO defines diabetes as “a chronic disease that occurs either when the pancreas does not produce enough insulin or when the body cannot effectively use the insulin it produces.”

2.Claim: “Diabetes has tripled in the last 10 years…“-Fred Bisci

Fact: The statistics from Centers for Disease Control and Prevention suggests that from 1980 through 2011, the number of Americans with diagnosed diabetes has more than tripled (from 5.6 million to 20.9 million). It actually took 20 years for diabetes tripling instead of 10 years as claimed by Fred Bisci in the movie. 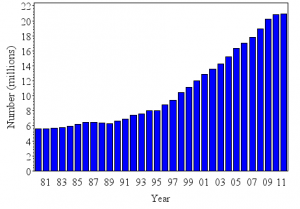 3. Claim: “(Diabetes) That’s a lifestyle disease. That’s all about what you put into your mouth.” -Fred Bisci

Fact: Fred Bisci is implying in this claim that diabetes is caused by the food you consumed. While it has an element of truth, the cause of the diabetes should be explore deeper. According to Greenspan’s Basic & Clinical Endocrinolog, diabetes is due to either the insufficient insulin or the cells of the body not responding properly to the insulin produce. Commonly the diabetes are divided into three categories, each of which has different cause. According to WHO,

Type 1 diabetes is characterized by deficient insulin production and requires daily administration of insulin. The cause of type 1 diabetes is not known and it is not preventable with current knowledge.

Type 2 diabetes results from the body’s ineffective use of insulin. Type 2 diabetes comprises 90% of people with diabetes around the world (5), and is largely the result of excess body weight and physical inactivity.

Gestational diabetes is the third main form and occurs when pregnant women without a previous history of diabetes develop a high blood glucose level.

Therefore, for people with type 2 diabetes the cause may have something to do with their eating habits, this cause cannot be boldly extended to other two types as in some cases genetics also plays a role.

4. Claim: one out of three children born after the year 2000 will get diabetes. 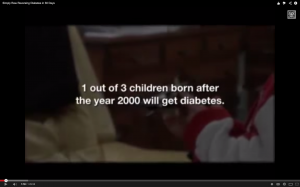 Source: The CBS quoted a scientist with the Centers for Disease Control and Prevention, who says “one in three U.S. children born in 2000 will become diabetic unless many more people start eating less and exercising more.” By quoting part of the original line, the movie puts out a really scary statement without sufficient facts supporting the claim.

Fact: While the movie claims that cooking the food lose 50% of the protein, a study shows that heating can result in a decrease in total amino-acid content by 6%. (Amino acids, which make up protein, are the basic building blocks of the body and are needed to replace broken proteins.)

Studies found that it actually depends on the vitamin how much they are lost during the cooking. As opposed to the 70%-80% claimed by Gabriel Cousens,  a study shows that boiling may result in a 20 to 30 percent loss of vitamin C from unpeeled roots and tubers, while the loss may be much higher, up to 40 percent, if peeled before boiling.

Among the vast amount of people with diabetes, six people can not make up for a sufficient sample size. Besides, this experiment lacks necessary randomness due to the fact that all the participants are self-selective. As a result, it’s hard to generalize from the results shown in the movie.