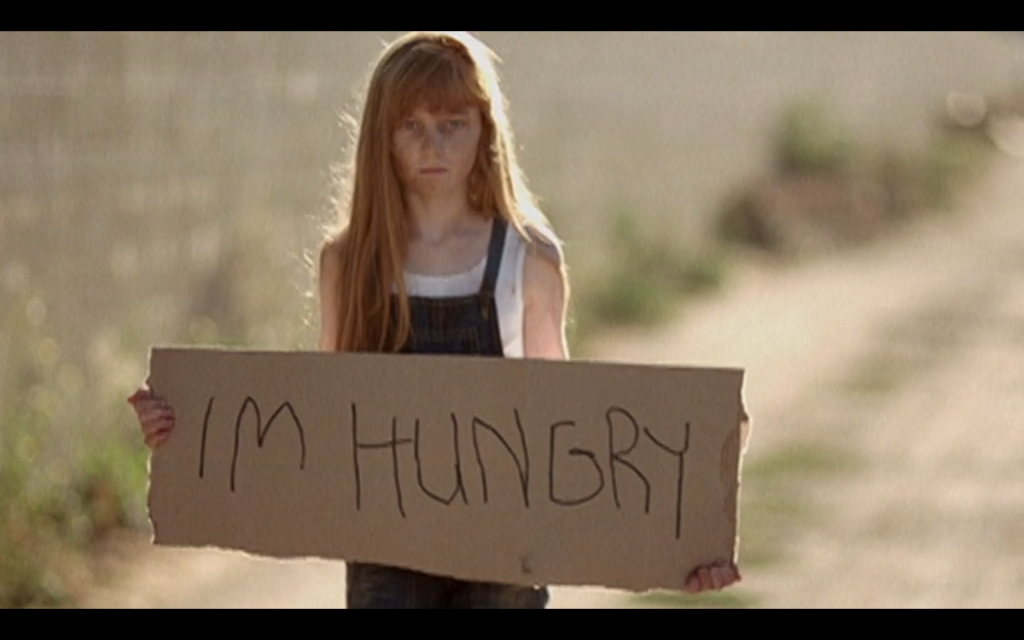 The effects of food insecurity on children are a central focus of A Place at the Table. This page chronicles information relating to the effects of nutritional deprivation for children, food assistance programs, school lunches programs, and the Child Nutrition Act. 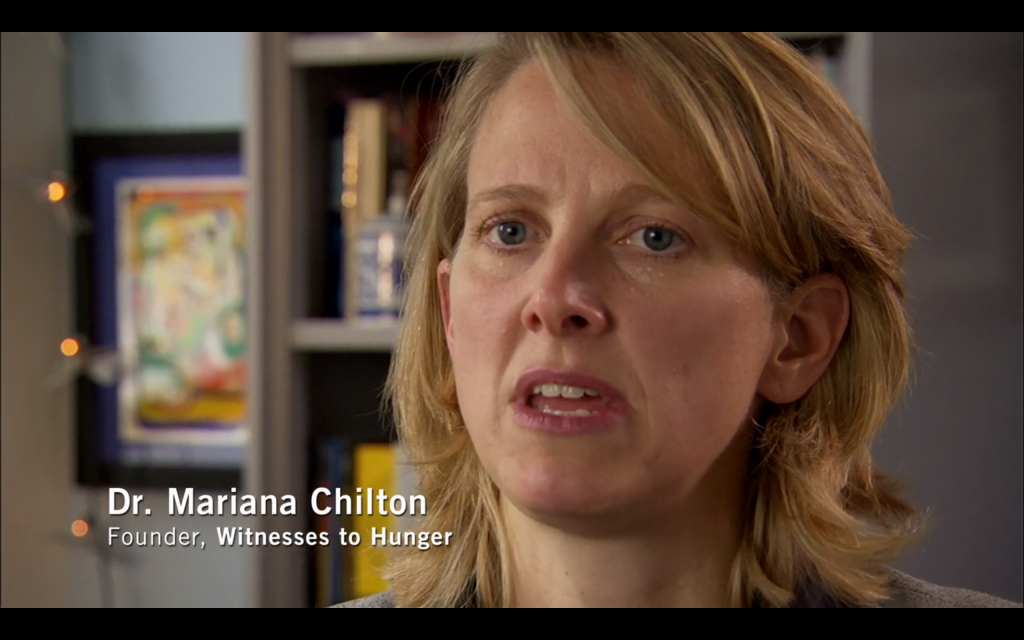 Claim: “Any kind of nutritional deprivation, however short that it could be, in those first three years of life can have lifelong consequences for a child. It affects their cognitive development, their ability to get along with others. They could be constantly sick and constantly getting infections because they’re not well nourished. It can truncate a child’s developmental potential whether or not it affects their growth outcomes—their physical stature and their weight—it affects their brain on a much deeper level.” -Dr. Mariana Chilton

Fact: A variety of studies back up these general claims that Dr. Chilton makes.

Zero to Three, the National Center for Infants, Toddlers and Families, states that:

“Brain development is most sensitive to a baby’s nutrition between mid-gestation and two years of age. Children who are malnourished–not just fussy eaters but truly deprived of adequate calories and protein in their diet–throughout this period do not adequately grow, either physically or mentally. Their brains are smaller than normal, because of reduced dendritic growth, reduced myelination, and the production of fewer glia (supporting cells in the brain which continue to form after birth and are responsible for producing myelin). Inadequate brain growth explains why children who were malnourished as fetuses and infants suffer often lasting behavioral and cognitive deficits, including slower language and fine motor development, lower IQ, and poorer school performance.”

In addition, a study done by researchers at the National Cancer Institute and the University of Calgary found that:

“[C]hildren who went hungry at least once in their lives were 2½ times more likely to have poor overall health 10 to 15 years later, compared with those who never had to go without food. “Our research shows that hunger and food insecurity are really damaging in terms of children’s life chances,” says lead author Sharon Kirkpatrick, a visiting fellow at NCI.

The study supports earlier findings that multiple episodes of hunger are more likely to cause ill health than an isolated experience of starvation: children in Kirkpatrick’s analysis who experienced two or more periods of hunger were more than four times as likely to report poor health than those who never went hungry. The relationship, she says, remained strong even after the team accounted for other factors that could influence health, such as age, sex and household characteristics like income.” 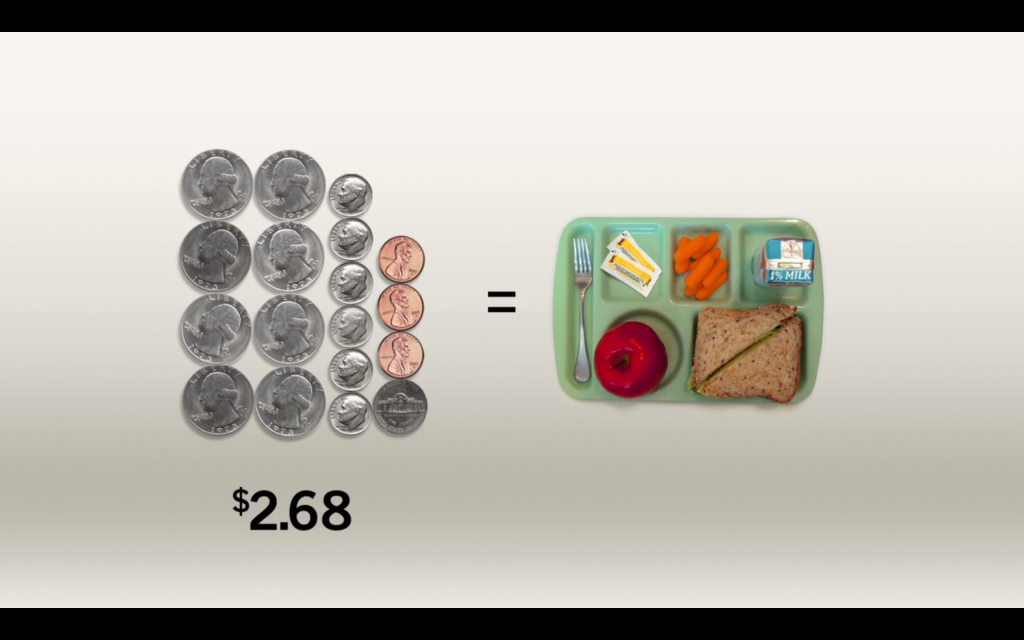 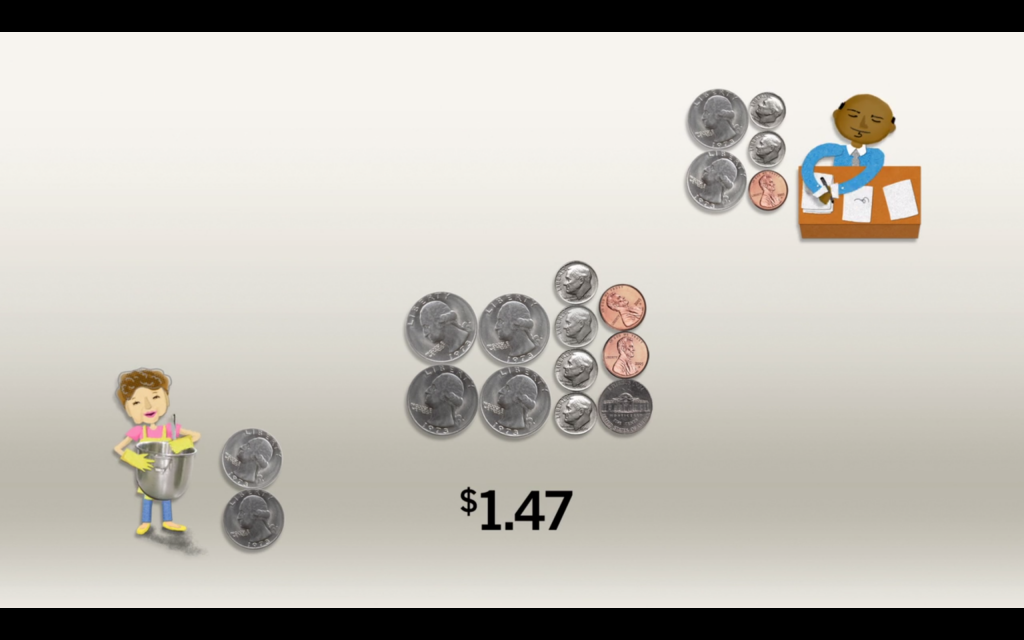 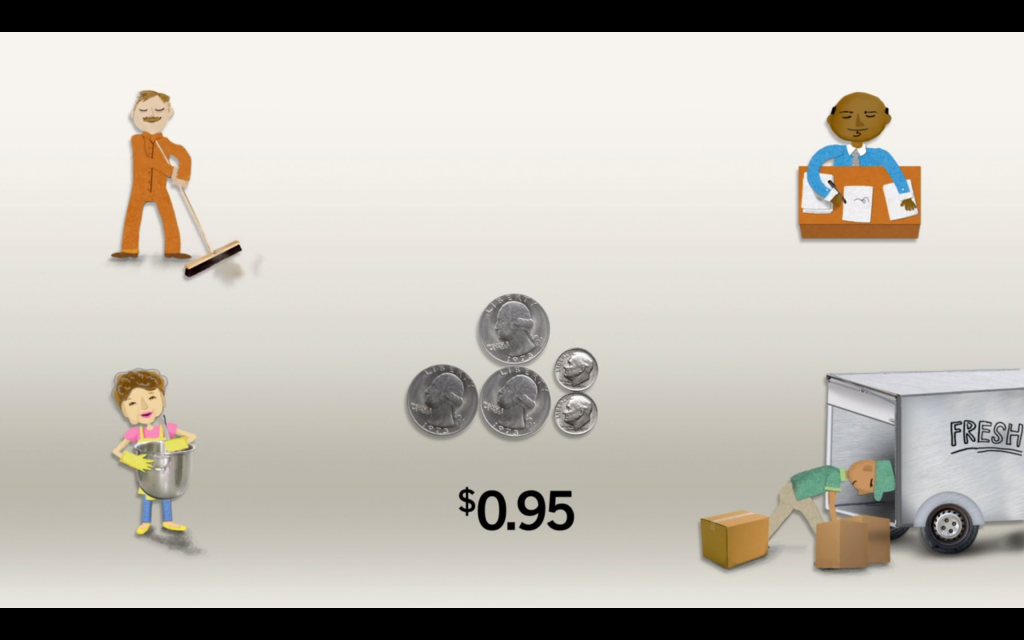 Claim: “If you figure that the federal government is reimbursing schools $2.68 for a meal that’s served free and you take out the labor costs and the administrative cost, and costs for gas and electricity and custodial services and what have you, it really doesn’t leave a lot for food. Most schools report that they have between $.90 and a $1 to actually spend on food.” -Janet Poppendieck

Fact: USDA rates for school federal lunch reimbursements during the 2009-2010 school year were $2.68, and it is correct that most schools spend about $1 per student on the actual food.

More information about the National School Lunch Program  (including current statistics) can be found on the Food Research and Action Center’s website.

Claim: “Only 25% of youngsters in America today ages 19-24 are fit for military service, and one of the principal reasons for that is that too many of our youngers are overweight. The Institute of Medicine did a study of nutritional value of the meals that we are currently serving to our children and found that there was too much fat, too much sugar, too much sodium, not enough fruits, not enough vegetables. There is obviously room for improvement.” -Tom Vilsack, Secretary of the Department of Agriculture

Fact: According to a 2009 report by Mission Readiness, 75% of America’s young adults are unfit to serve in the military, but obesity is not the single cause. The report also lists inadequate education and criminal records as other barriers. Only 27% of young Americans are considered to be unfit because they are overweight. Another 32% have other health problems that also disqualify them (ex. asthma, eye sight, or hearing problems).

The Institute of Medicine did a study in 2009 that signaled out problems with current school lunches, including low amounts of fruits, vegetables, and whole grains and high amounts of fat, sugar, and sodium. 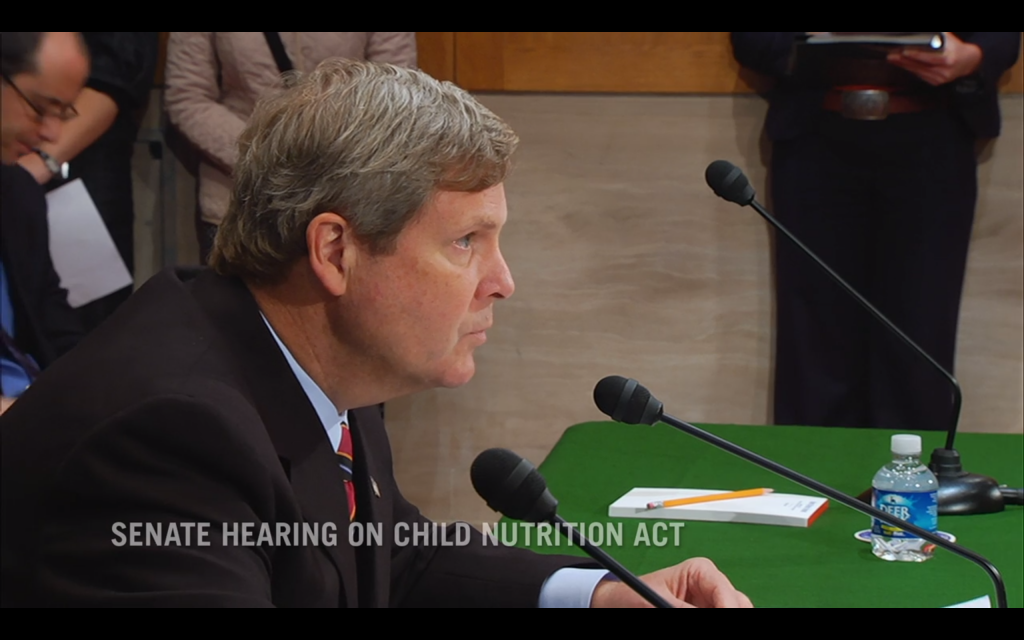 Claim: “The Obama administration takes this opportunity very seriously. The administration proposes a historic investment of 10 billion dollars in additional funding over 10 years.” -Tom Vilsack, Secretary of Department of Agriculture, on the 2011 Child Nutrition Act

Fact: The Obama administration did want to pledge $10 billion to go to the 2011 program. 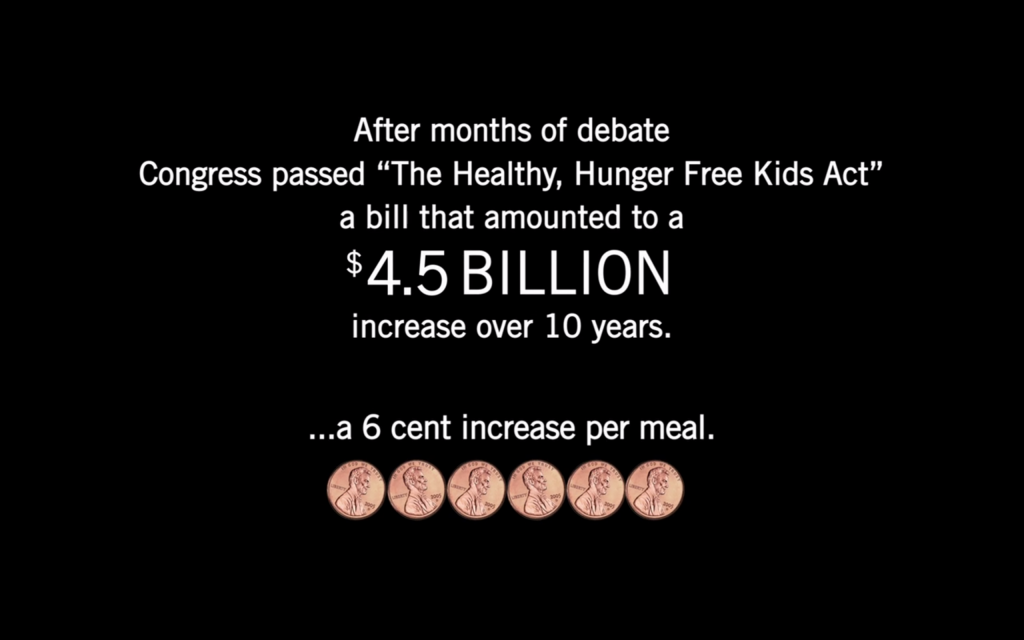 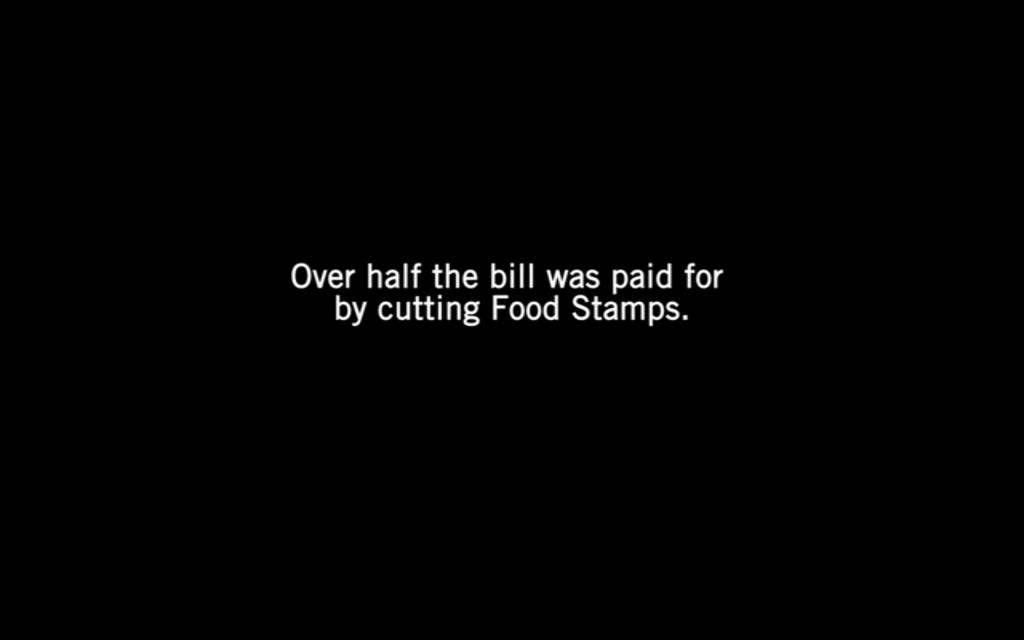 Claim: After months of debate, Congress passed the “Healthy, Hunger Free Kids Act” a bill that amounted to a $4.5 billion increase over 10 years. … a 6 cent increase per meal. Over half the bill was paid for by cutting Food Stamps.

Fact: The Healthy, Hunger Free Kids Act does indeed include a $4.5 billion increase in funding over ten years and a $.06 increase per each school meal. $2.2 billion of the necessary funding came from cuts to the SNAP program. 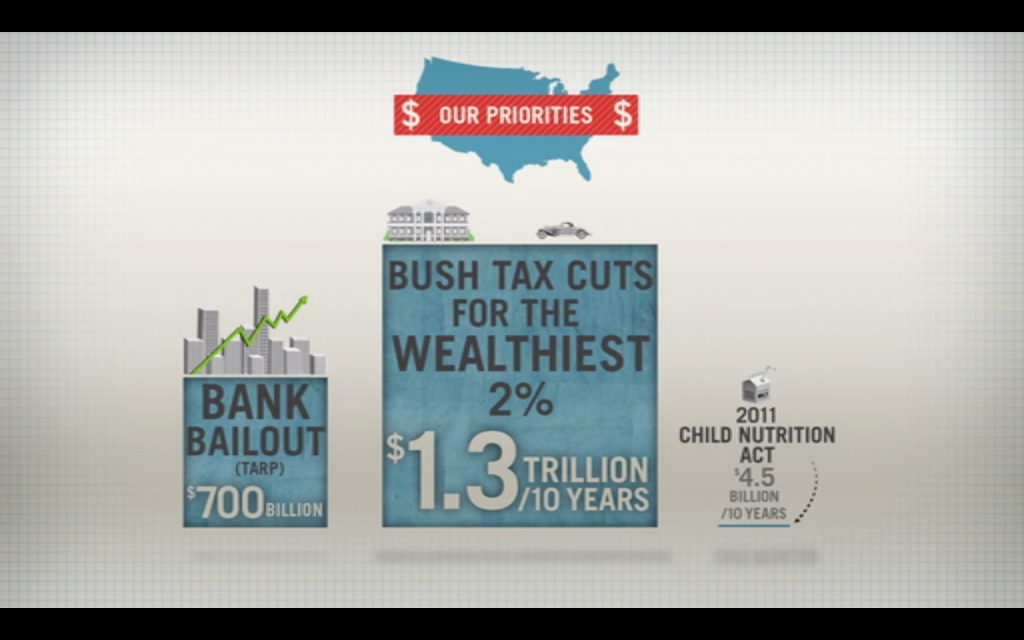 Claim: The movie claims that Bank Bailout (TARP) cost $700 billion, that Bush tax cuts for the wealthiest 2% totaled 1.3 trillion over 10 years, and that only 4.5 billion was allocated for the 2011 Child Nutrition Act.

Fact: The U.S. Government did pledge $700 billion for the bank bailout.

The Bush tax cuts went into effect in 2001 and 2003; they are estimated to have totaled around $1.5 trillion during Bush’s presidency. However, many of them continued to last into Obama’s presidency, bringing the total to well over $2 trillion. 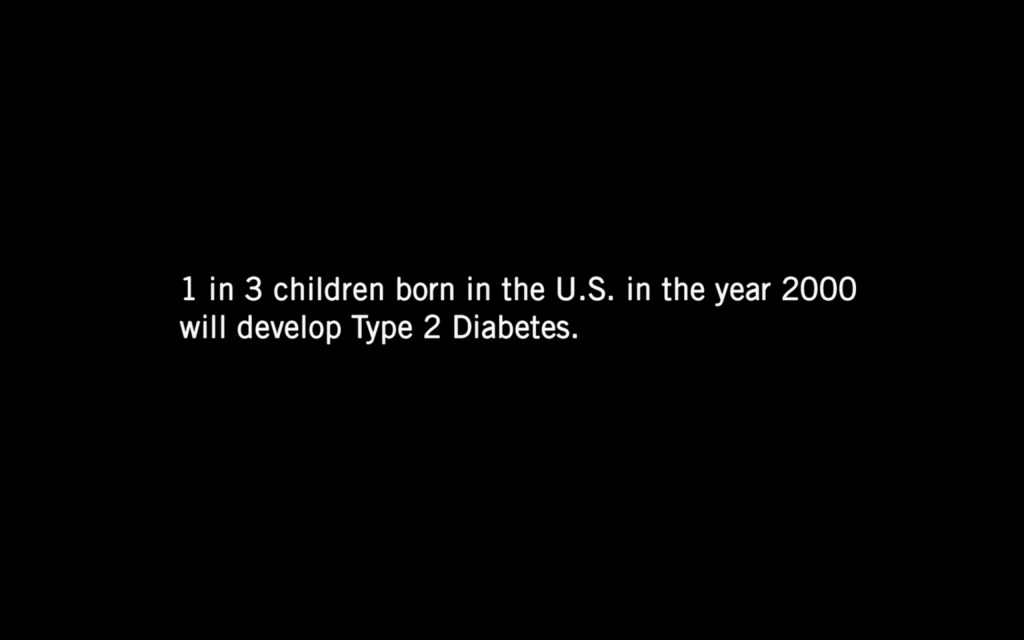 “Annual diagnosed diabetes incidence (new cases) will increase from about 8 cases per 1,000 in 2008 to about 15 in 2050. Assuming low incidence and relatively high diabetes mortality, total diabetes prevalence (diagnosed and undiagnosed cases) is projected to increase from 14% in 2010 to 21% of the US adult population by 2050. However, if recent increases in diabetes incidence continue and diabetes mortality is relatively low, prevalence will increase to 33% by 2050. A middle-ground scenario projects a prevalence of 25% to 28% by 2050.” 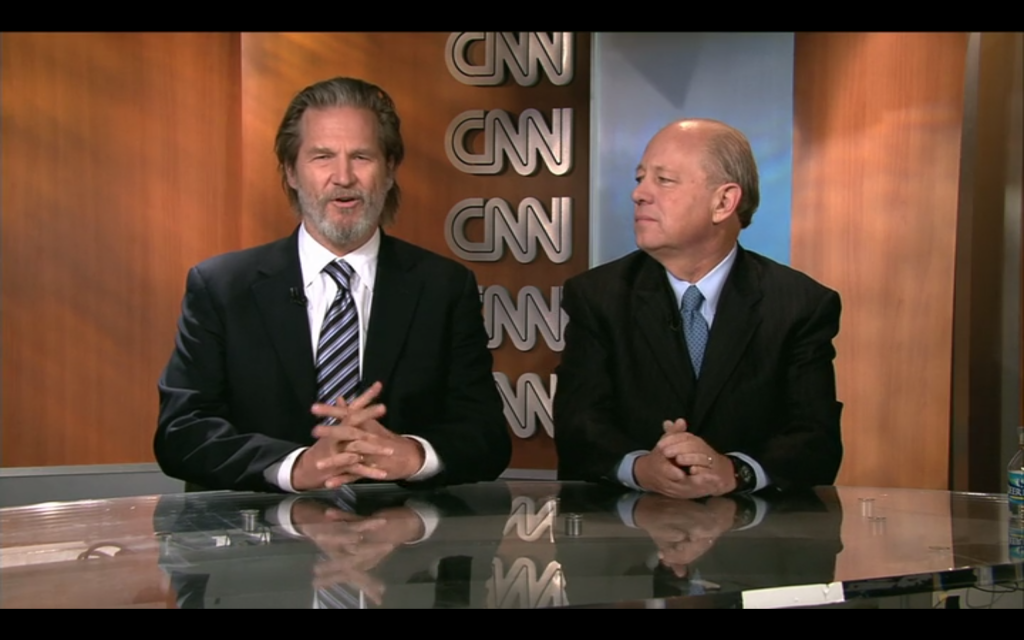 Claim: “We’re in dire straights. We have 17 million of our children who are living in homes with food insecurity.” -Jeff Bridges on CNN