A Place at the Table makes many claims related to agricultural policy in the United States, and the relationship between policies regarding agricultural subsidies, health, the cost of food, and the role of government organizations. Here are the facts regarding these claims. 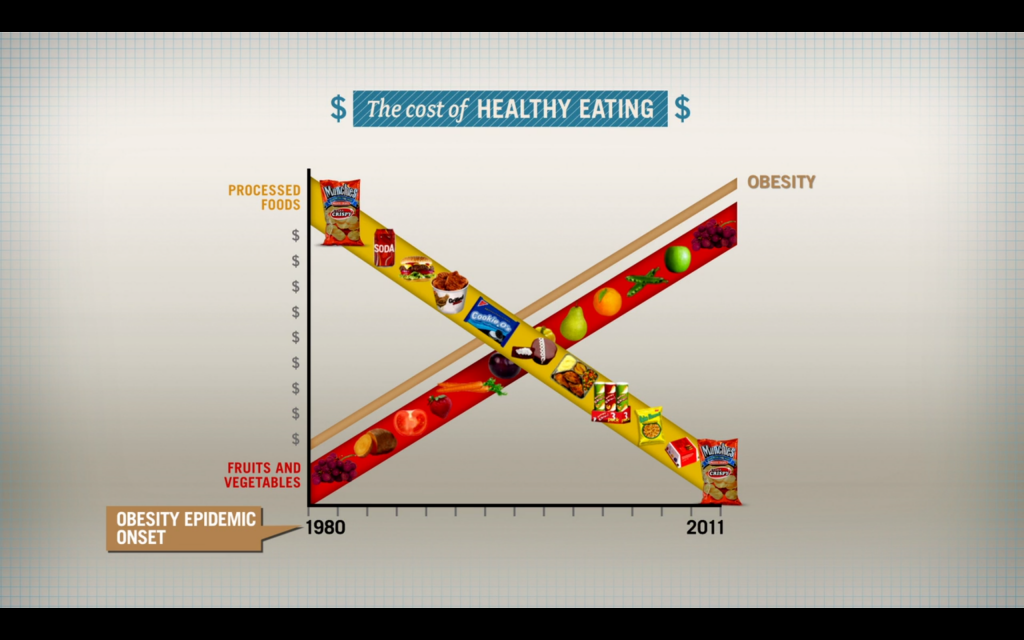 Fact: According to a report in the American Medical Journal Association:

The relative cost of commodity-derived products declined markedly between 1982 and 2008. Reflecting these trends, real (inflation-adjusted) price decreased by 10% for fats and oils, 15% for sugars and sweets, and 34% for carbonated drinks. In contrast, the real price of fresh fruits and vegetables increased by 50% over the same period.

However, according to reports from the USDA, claims regarding prices of food products are nearly impossible to verify. They state that while prices for processed foods have fallen, so have prices for fruits and vegetables (both adjusted for inflation).

An additional report done by the White House Task Force on Childhood Obesity also states that while some prices have decreased for unhealthy foods and increased for some healthy foods, the situation is far too complex to make sweeping generalizations about.

In general, one study in the Food Policy journal found that there was a growing price disparity in between prices for fruits and vegetables and prices for processed foods. 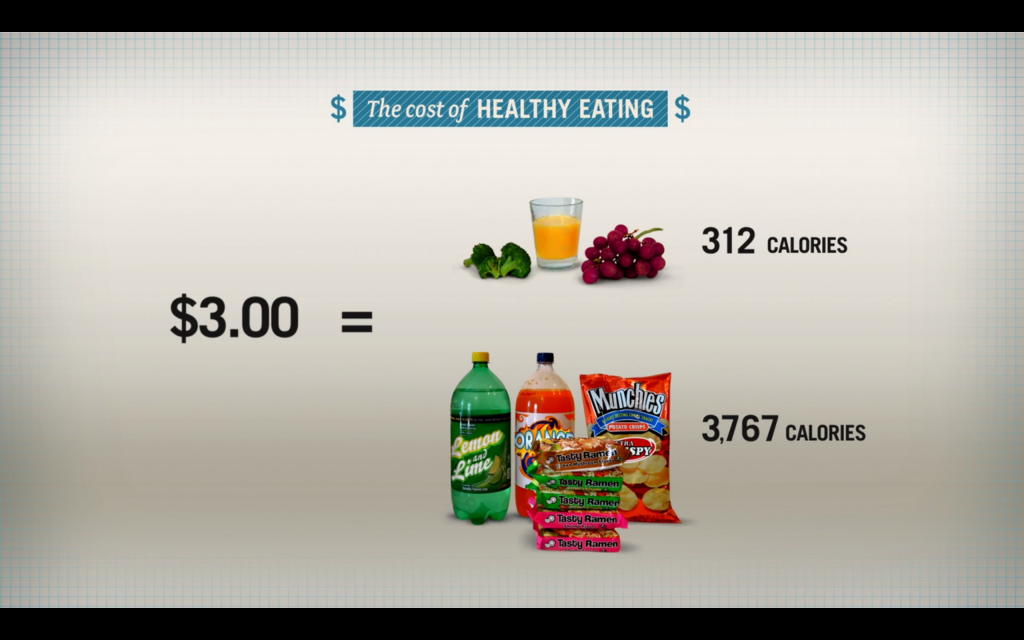 Claim: For $3, it is possible to purchase only 312 calories of healthy food versus 3,767 calories of unhealthy processed foods.

Fact: While food prices vary greatly depending on geographic location, store purchased at, etc., generally it is true that processed foods are cheaper calorie for calorie than fruits and vegetables. 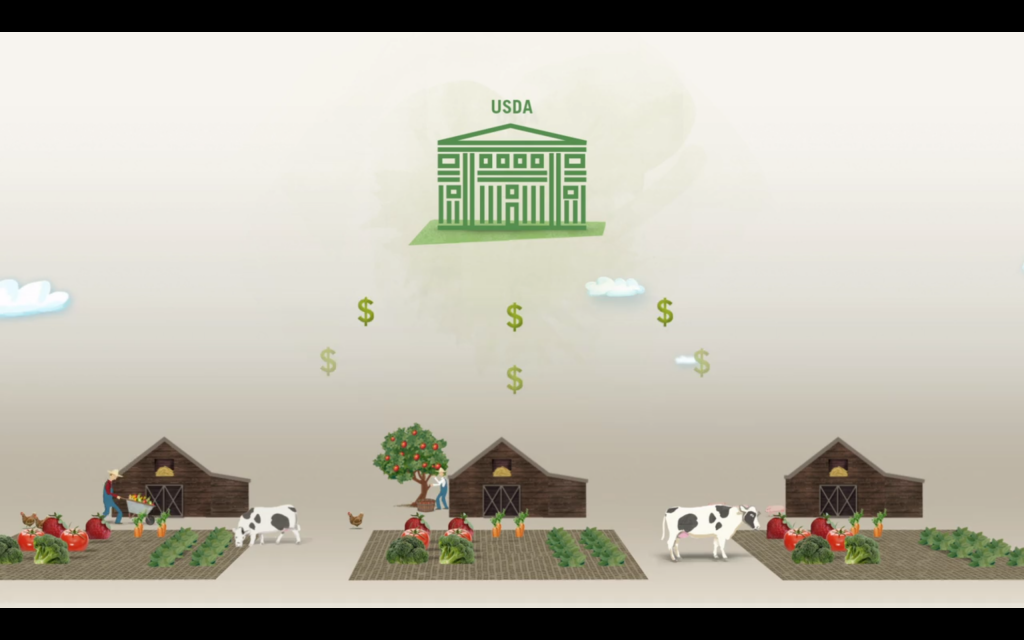 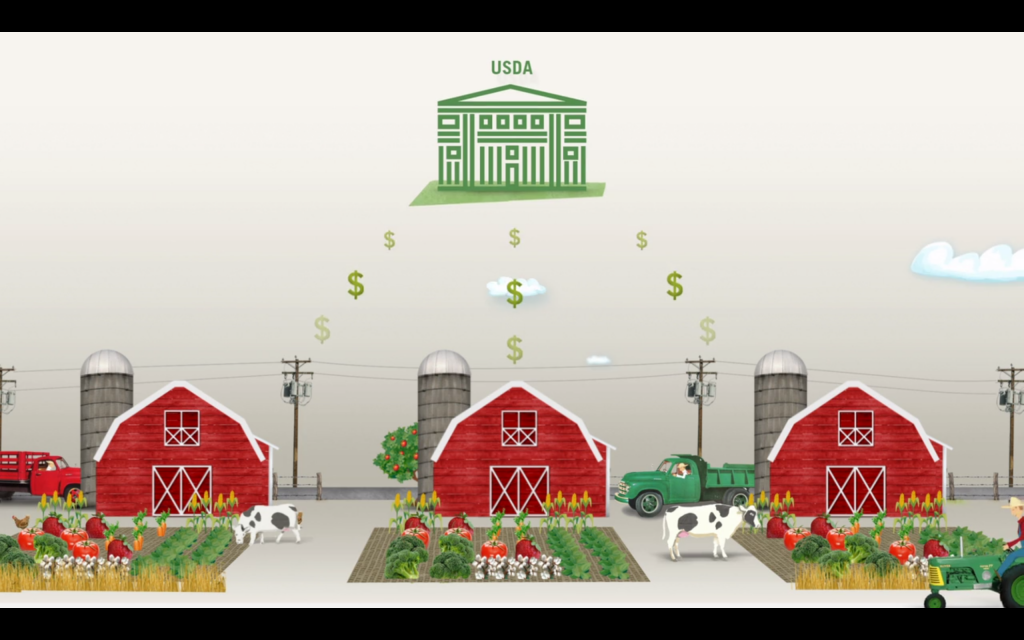 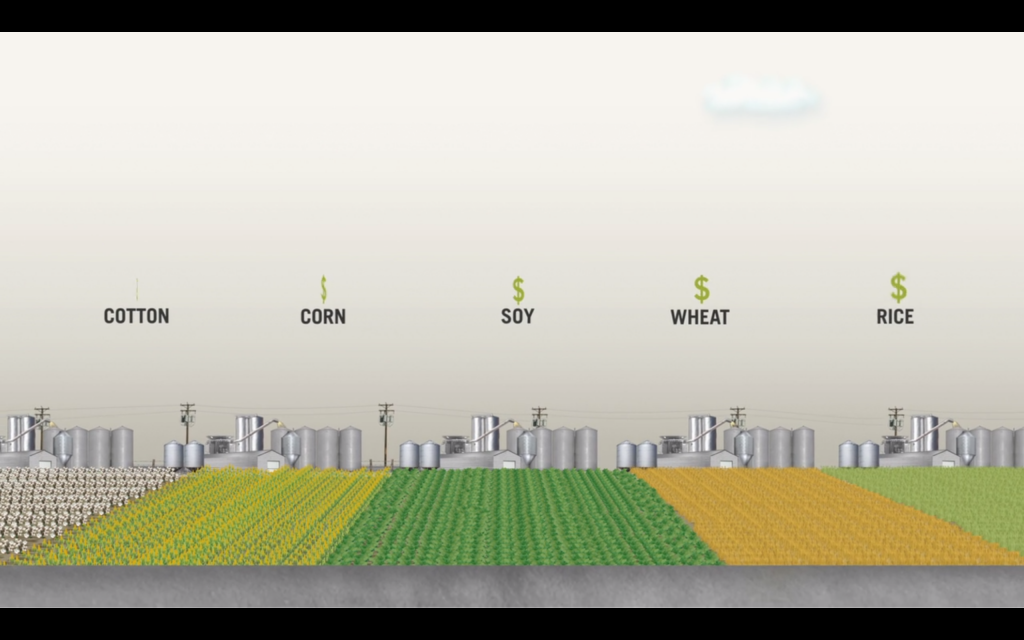 Claim: A Place at the Table claims that this ability to purchase high caloric, processed foods at a low price is a result of crop subsidies and farm policy.

This is followed by a brief summary of the history of U.S. agricultural subsidies from Ken Cook:

“The subsidy system that we now have actually started back in the 1930’s during the Great Depression. Farmers were the first to be hit hard when the economy went bad. There was a lot of pressure to put some sort of government assistance forward to help them get a decent price at harvest time for their crops. The programs in the Great Depression of course were emergency programs. The idea was if we could, on a temporary basis, help support the prices of farm products that would get through this difficult period, and then we would let the market take over, except we never let the market take over. In the 1930’s and 40’s and into the 50’s and even a little bit beyond that, I think you could make the case that it really was family farmers who were mostly benefiting from these programs. But as the agricultural sector became more concentrated in terms of ownership of the land resources more and more of these operations came to resemble agribusinesses and not family farming operations.”

Fact: As far as subsidies are concerned, most subsides do go towards ingredients in processed foods, making these foods cheaper than they would have been otherwise.

According to a report in the American Medical Journal Association:

“Since the 1960s, family farms have all but disappeared, largely replaced by industrial agriculture. During the same time, government spent large sums on agricultural subsidies, primarily to support high-calorie commodities at the expense of more nutritious produce. As a result, highly processed products derived from wheat, corn, rice, soybeans, and livestock raised on these commodities now form the base of the US diet, displacing a wide range of health-supporting whole foods.”

This brief history by Ken Cook of agricultural subsides in the U.S. is a mostly correct, if somewhat over-simplified look at decades of history. 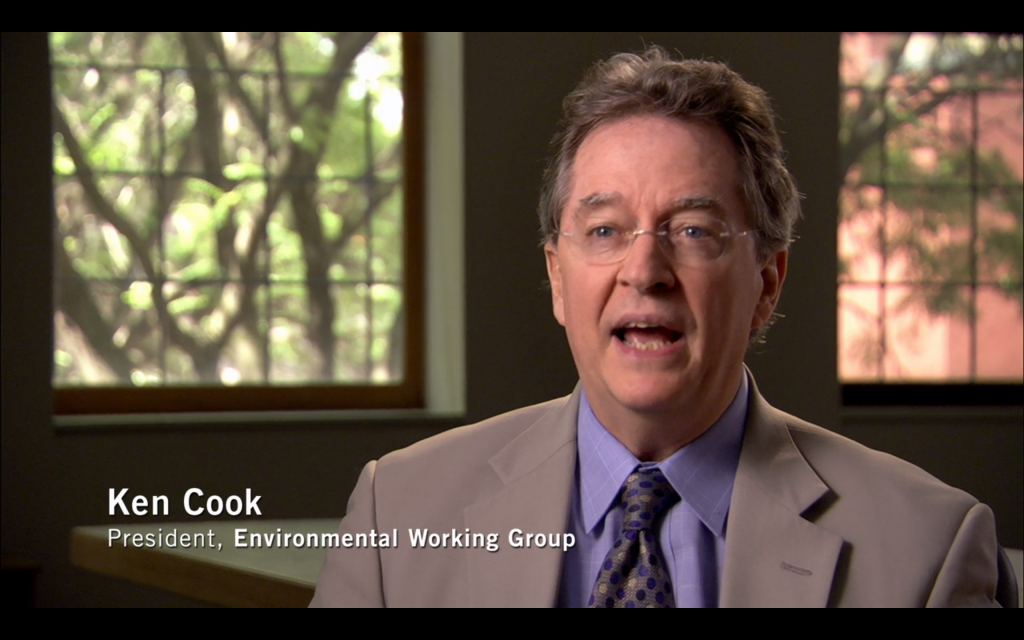 Claim: “Most of that subsidy money—about 70% of it—has gone just to 10% of those beneficiaries. The biggest, largest, best capitalized farms, they’re hauling in this taxpayer money now.” -Ken Cook 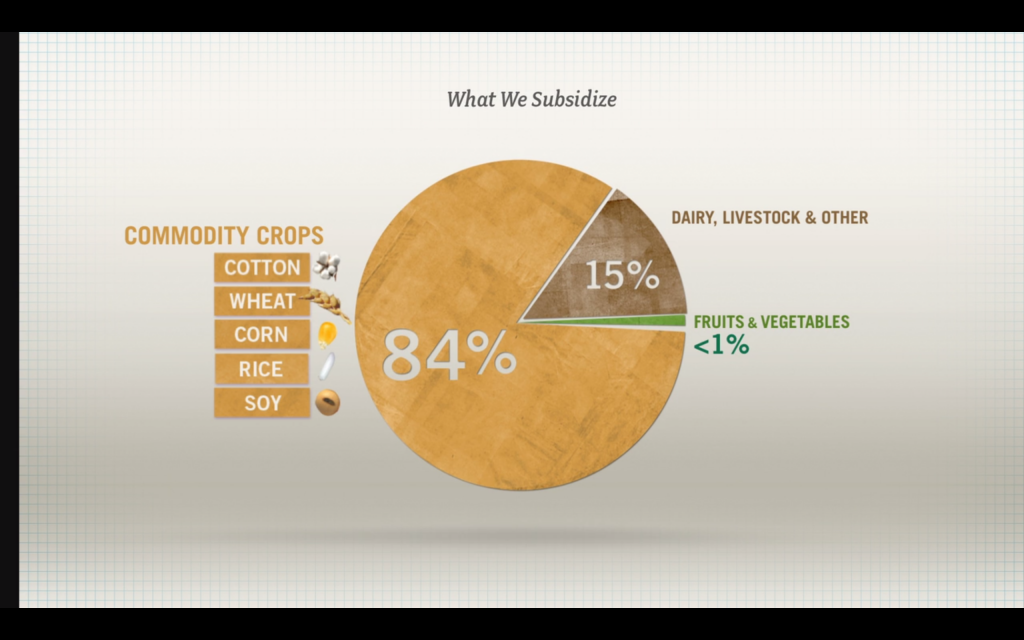 Claim: 84% of food subsidies go towards commodity crops like cotton, wheat, corn, rice, and soy, while 15% goes to dairy and livestock, and only 1% goes towards fruit and vegetables.

Fact: According to the Environmental Working Group, from 1995-2012, a total of $292.5 billion was paid towards agricultural subsidies (including commodities, crop insurance, conservation, and disaster subsidies).

Together, cotton, wheat, corn, rice, and soy subsidies amounted to approximately $191 billion–closer to 66% than than 84%.

Dairy, livestock, and other programs amounted to approximately $80.5 billion–27% of the total.

Only one of these programs focused on a fruit or vegetable, in this case apples. Apples  amounted for $261,540,987–less than 1% of the total. 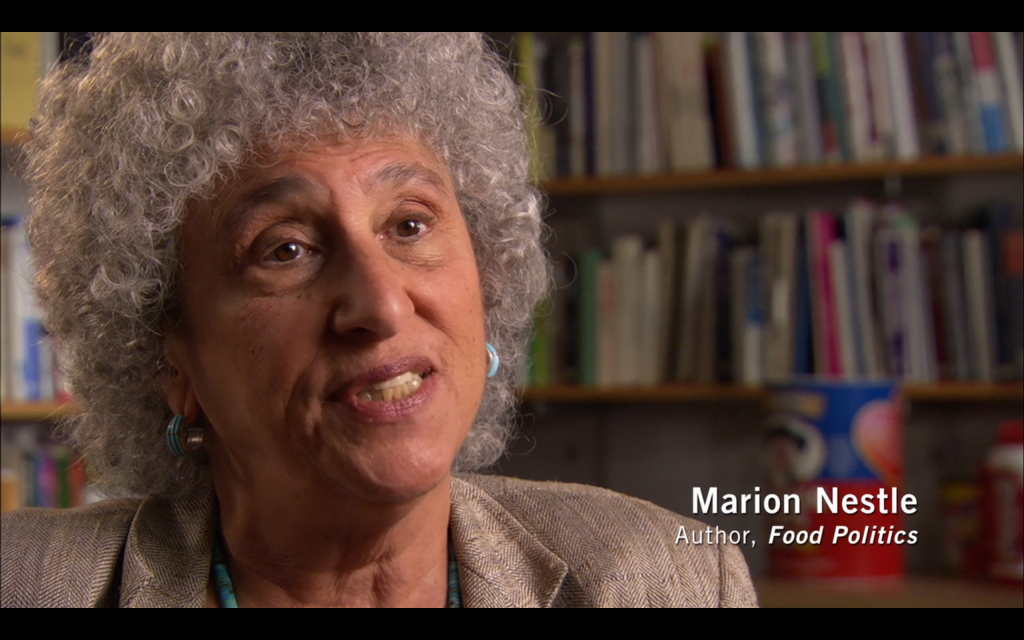 Claim: “We subsidize the basic ingredients in processed foods. We do not subsidize fruits, vegetables, and whole grains because the producers tend to be small producers. They don’t have the kind of political clout that the big commodity producers of corn and soybeans and wheat that gets processed do.” -Marion Nestle

Fact: While these claims are somewhat generalized, it is true that most fruits and vegetables are not subsidized. Most commodity crops do have large associations that back their interests with lobbying, such as the National Association of Wheat Growers and the National Corn Growers Association.

Fact: While it is not clarified what Nestle means why “the wrong foods”, assuming that she means subsides that go towards commodity crops that become processed foods, according to NPR, this figure is slightly exaggerated for current numbers, which are closer to $14 billion. However, the highest subsidies spending was well over $20 billion; in 2000, it totaled $24.7 billion. 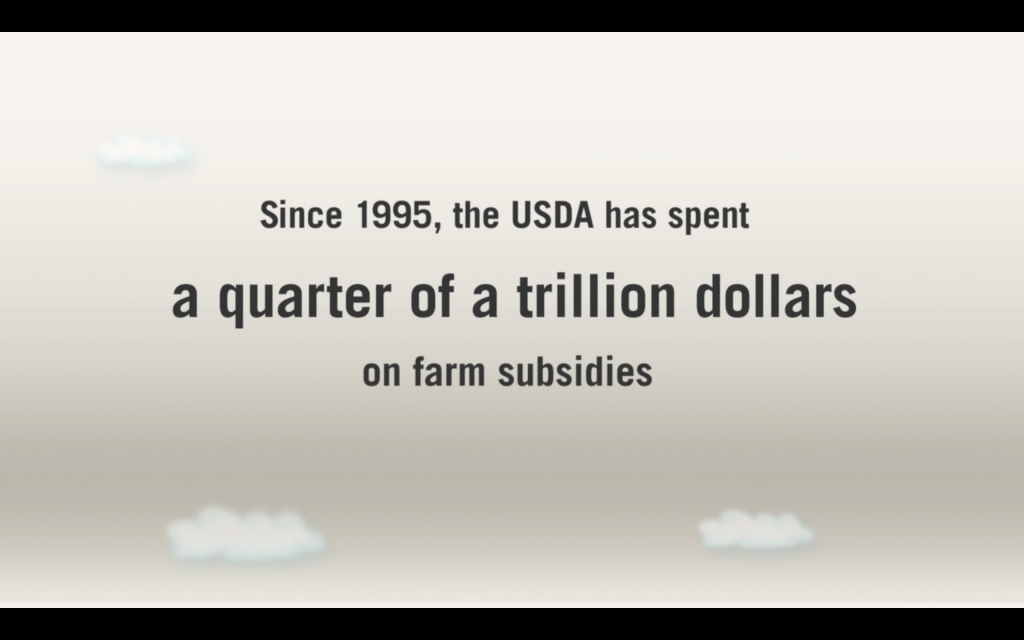 Claim: Since 1995, the USDA has spent a quarter of a trillion dollars on farm subsidies. 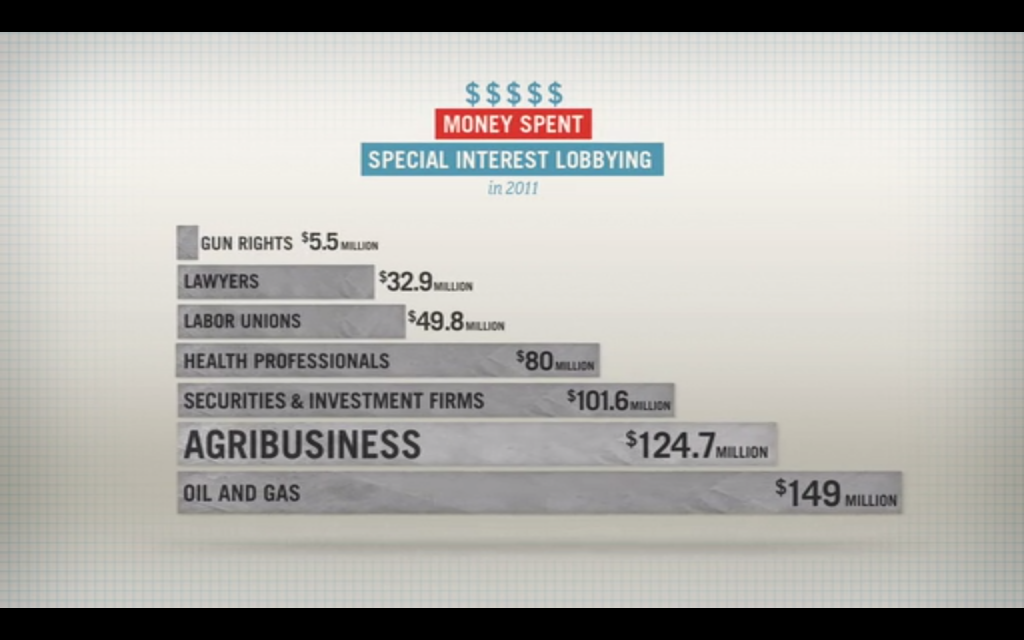 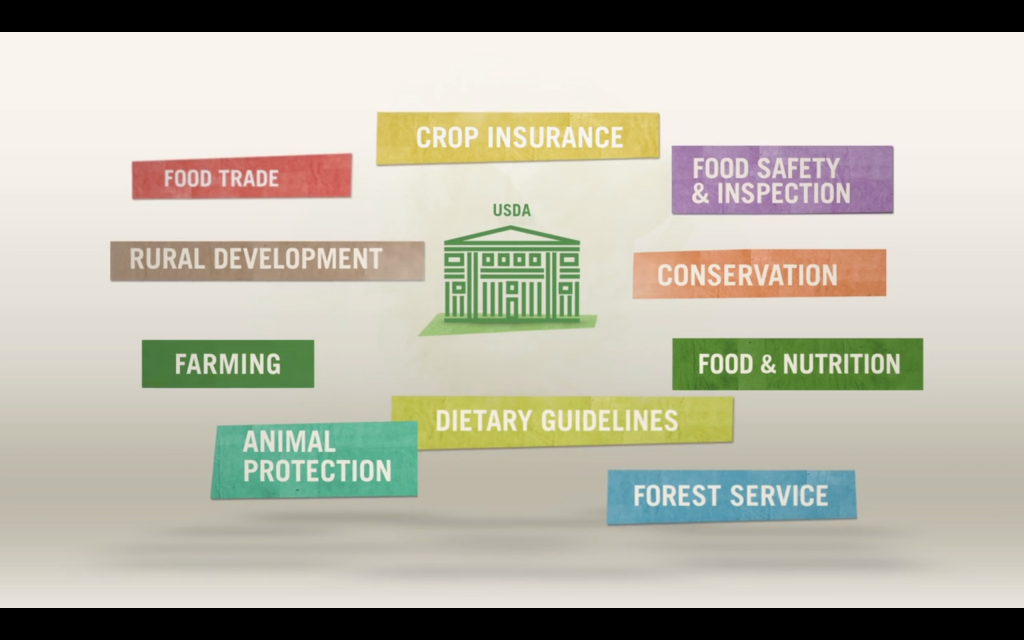 Claim: “The U.S. Department of Agriculture or the USDA is one of the most diverse and complex agencies in the entire federal government. It does everything from international food trade to the forest service to food safety to animal protection to of course farming programs and food and nutrition programs.” -Joel Berg