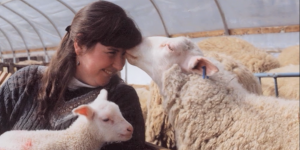 Pictured: Linda Fallace and her European sheep that were confiscated by the USDA. 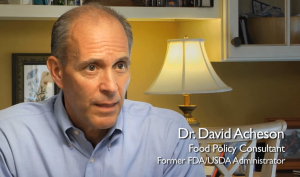 However, sheep can contract a similar disease called scrapie.

According to the New York Times:

“Many scientists think Britain’s mad cow epidemic had its origins in scrapie, a spongiform brain disease that occurs in sheep and goats…Scrapie has never been known to spread naturally from sheep to cows or to people who eat lamb, but it is believed to have infected cows in England in the 1980’s because they were given feed made in part from rendered sheep carcasses that were heavily laden with scrapie prions.”

The Chicago Tribune reported on a USDA confiscations of sheep in Vermont, including the Fallices, in an act the Tribune calls, “the most dramatic move so far to prevent mad cow disease from infecting American livestock.” In the article, USDA veterinarian Linda Detwiler (who is  mentioned in the film for confiscated the Fallices’ sheep), notes:

“The USDA has never said this is BSE,” said USDA veterinarian Linda Detwiler, referring to the scientific name for mad cow disease, bovine spongiform encephalopathy. “It could be a strain of scrapie.”

This seems to demonstrate her acknowledgement that that these sheep do not have BSE.

However, the Tribune notes:

“Although sheep have never been found to develop spongiform encephalopathy under normal circumstances, they have contracted the ailment in laboratory tests after being fed small amounts of infected cattle brain.”

It seems as if the claim in the movie is factual, but that sheep are biologically capable of contracting BSE.

According to the CDC, there have been only four (4) cases of BSE identified in the United States.

While BSE has been found in the US, none of the cases have been from sheep.