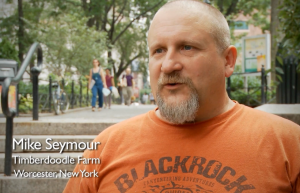 TRUE AND FALSE: All meat for commercial sale must go through USDA inspected slaughterhouses. However, meat can also be inspected by State agencies.

A June 2012 USDA report notes that meat for commercial sale in America must be inspected. The report states, “All meat and poultry produced for retail in the United States must come from animals that are slaughtered and processed under continuous inspection, meaning that every animal is inspected before and after slaughter” (4). The USDA recognizes that limited slaughter ability is a barrier to local meat and poultry (3), which was the essence of Mr. Seymour’s claim in the film.

The USDA does recognize that “…access to inspected processing facilities of the appropriate scale is uneven across the country for small producers” (16). Additionally, federally inspected slaughterhouses have decreased from 910 in 2001 to 841 in 2010 (8).

One solution are mobile slaughter units (MSUs) which is defined as “a self-contained slaughter facility that can travel from site to site” (18). One issue is waste disposal and biosecurity (19).

An academic scholar Michelle Worosz (2008) used Michigan as a case study to examine the impact of food safety regulations on entry to red meat market. She discovered that local producers are generally subject to state and local regulations. However, this also posed problems since states had different standards and the meat could not be part of the interstate market. Additionally, the 1967 Wholesome Meat Act (WMA) required states to have at least federal standards, which lead to the shutdown of many state plants. Overall, she determined, “specialty red meat producers must negotiate a complex web of national, state, and local statutes and regulations, as well as perceptions about the rules that subject them to testing, monitoring, and certification of precisely defined attributes” (196).

In summary, Mr. Seymour’s claim was true and false. Meat must be inspected, but not necessarily by the USDA, as states can also play the inspector role. But as described, the downside is that that meat must stay within the state.