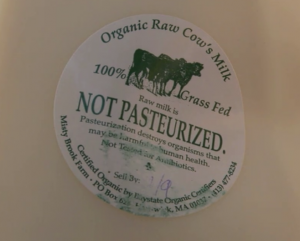 Facts: Pasteurization alters milk nutritional value and does more harm than good for milk and its consumers.

FALSE. Milk pasteurization has no impact on the nutrient value of milk and is still an important tool to fight harmful pathogens. Unpasteurized milk continues to be relatively unsafe for human consumption.

The CDC reports (2014) that raw milk is unsafe and has been shown to correlate with disease. The agency reports:

From 1998 through 2011, 148 outbreaks due to consumption of raw milk or raw milk products were reported to CDC. These resulted in 2,384 illnesses, 284 hospitalizations, and 2 deaths. Most of these illnesses were caused by Escherichia coli, Campylobacter, Salmonella, or Listeria.

Additionally, in the same article, the CDC reports that states that allow the legal sale of raw milk for human consumption have more raw milk-related outbreaks of illness than states that do not allow raw milk to be sold legally.

This appears to yield strong evidence that raw milk is not safe for human consumption.

“Lower morbidity and mortality associated with pasteurized milk attest to the value of pasteurizing raw milk” (798).

Frederick Angulo writes in his article, “Unpasteurized milk: a continued public health threat” (2009), that milk can be contaminated form bacteria around the teat of the cow (93). Thus, even a healthy animal can yeild significant bacteria levels in its milk.

To test this claim, Angulo took samples of milk from cows in New York and Pennsylvania (1991–1995) and Wisconsin (1994–2001) and found the prevalence of intramammary infections was ~50% (94). Based on this, a consumer of raw milk has about a 1 in 2 chance of getting tainted milk.

In terms of nutritional value, CDC reports: “All of the nutritional benefits of drinking milk are available from pasteurized milk without the risk of disease that comes with drinking raw milk.”

A study by Claeys et. al (2014) published in Food Control Journal compared the composition of different types of milks and also discovered “…that heating has only a minor effect on the nutritional value of milk fat” (194). They also note:

“…it can be assumed that the nutritional benefits associated with the consumption of raw milk, including its contribution to the uptake of calcium, phosphor, proteins and essential amino acids (especially lysine), and a number of vitamins, are generally maintained after pasteurization or UHT treatment” (198).

Overall, pasteurization is still necessary to fight widespread disease in milk and has no impact on milk’s nutritional value.