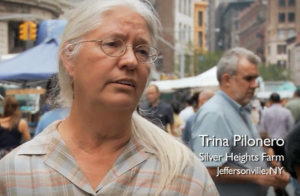 Fact: GMO Foods are unsafe for consumption and GMO labeling is a benefit for society.  — Trina Pilonero, Silver Heights Farm

Alessandro Nicolia et. al write in their piece, “An overview of the last 10 years of genetically engineered crop safety research.” (2013):

“We have reviewed the scientific literature on GE crop safety for the last 10 years that catches the scientific consensus matured since GE plants became widely cultivated worldwide, and we can conclude that the scientific research conducted so far has not detected any significant hazard directly connected with the use of GM crops.” (8).

This clearly demonstrates the lack of scientific evidence that GMOs are hazardous to human health.

One recently publicized negative health impact of GMO foods was microRNA, which is supposedly absorbed by humans during the digestive process.

Ari LeVaux wrote an article in The Atlantic titled, “The Very Real Danger of Genetically Modified Foods” (2013), which asserted that Chinese researcher Chen-Yu-Zhang discovered microRNA in the blood of rice-eaters, which he asserts leads to Alzheimer’s disease, and high cholesterol.

Emily Willingham responded in a Forbes article, “Alleged Danger of GMOs Not Looking Very Real” (2013) where she counters the findings in the Zhang study. She asserts that microRNA cannot survive the digestive process. Additionally, a team of doctors from John Hopkins University discovered that Zhang likely found false positives due to their methods.

While the public is regularly exposed to stories about the harmful effects of eating GMO foods, the science is not there to back up those claims.

Furthermore, there can be negative consequences on labeling GMO foods. Peter Phelps and Grant Isaac write in their piece, “”GMO labeling: threat or opportunity?” (1998), that GMO products are now nearly ubiquitous in all of American food products. They state: “North American production of corn, soybeans and canola is now more than 50% with transgenic traits” (1). They also write, “[c]orn, soy, and canola—significantly genetically modified already—are incorporated in more than 30,000 processed foods, as well as comprising a major source of animal feed. Therefore, labeling of this sort could seriously disrupt domestic and international food markets and would constitute a threat to the entire industry (4).

The process of labeling is also not so black-and-white as the film makes it to be. Labeling could be either product-based or process-based. The former is labeling based on what is in the product was altered at the end, whereas the latter is where GMOs are mixed together. They conclude that, “mandatory labeling is clearly a threat to the continued development of biotechnology products and processes” (6).This is due, they found, to the fact that labeling would likely lead to GMO products being discounted. The problem is that the information is often lacking to draw connections between GMO products and negative health impacts (4). The argue it’s better to let labeling be voluntary, which would incentivize companies to label their products “GMO Free” (5).

In the international realm, mandatory labeling would be problematic because of the sheer number of GMO foods in one product, leaving American products at a disadvantage abroad based on lacking science (4).

Overall, mandatory GMO labeling has negative economic consequences and is based on unclear science; however, voluntary labeling will lead companies to label foods as “GMO Free” for a premium price.