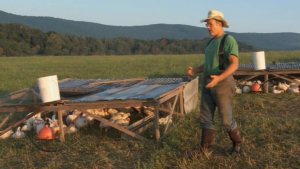 Fact: Having many chickens in one coop makes abrasions in their mucus membranes and respiratory tracts, and is overall bad for their health. — Joel Salatin, Farmer/Author, Polyface Farms.

TRUE: Chickens being in crowded conditions has adverse health impacts on chickens, such as facilitating the spread of disease.

The first, fowl cholera, is mainly caused by a bacterium, Pasteurella multocida (PM). The disease multiplies in bloodstreams of birds. Vaccines are available, as are antibiotics. (tetracyclines and sulfonamides, penicillins, Fluoroquinolones) [1139]. Glisson writes,  “various animals, particularly cats and rodents, are a common source for the introduction of the organism into commercial poultry” (1139).

The second disease, Infectious Coryza, is an upper respiratory infection. Glisson notes, “the infection does not spread readily from farm to farm without movement of contaminated people or fomites from farm to farm” (1140).

By outlining these two diseases found in poultry and how they spread, it becomes apparent that having many chickens in one coop can facilitate the spread of disease due to their close proximity.

Another disease threatening commercial poultry, Newcastle disease. In their piece, “Influence of poultry house dust, ammonia, and carbon dioxide on the resistance of chickens to Newcastle disease virus” (1966), Anderson, Beard, and Hanson examine how chicken coop air quality impacts the health of poultry.

They first set a baseline by writing, “[p]revious studies on ammonia inhalation in chickens (1) showed that 72 hr of exposure to atmospheric concentrations in the range of 20 to 50 parts per million (ppm) significantly increased the infection rate of chickens subsequently exposed to an aerosol of Newcastle disease virus (iNDV)” (177). This demonstrates how important air quality is to the health of poultry.

Then they conduct a trial experiment to identify the impact of poultry house dust, ammonia, and carbon dioxide on the resistance of chickens to iNDV, which is outlined below:

The results were mixed, but notable:

While there was little variance among the experiment groups, there was a noticeable negative health impact on the birds.