The smooth, clean interface of our modern communicative technology rarely shows it, but there is a lot that goes on behind the scenes when we share information and interact with each other online. As Dr. Irvine (2019) writes in his introduction to understanding information, data, and meaning, “We only notice some of the complex layers for everything that needs to work together when something doesn’t work (e.g., web request fails, data doesn’t come in, Internet connectivity is lost)” (p. 4).

Back in 1838, Samuel Morse sent the first telegraph in the United States. This was important because it started an evolution in public discourse that hasn’t stopped since. According to White & Downs (2015), “[Morse] used a binary system– dots and dashes– to represent letters in the alphabet. Before Morse, smoke signals did much the same thing, using small and large puffs of smoke from fires” (p. 258). Morse’s binary system has transformed (relatively quickly!) into the data-driven communication of today, where binary code (1s and 0s) is grouped and delivered in the form of bytes, which are assembled in packets and sent across the internet. The packets are sequenced and reorganized after being received by the computer(s) on the other end of the transmission (White & Downs, p. 259). All our digital information and media, in their myriad of forms, begins with simple binary, but can be transformed into text, emojis, images, videos, audio, and other forms of dynamic communication.

Neil Postman (1986), a cultural theorist and author of Amusing Ourselves to Death, takes a page out of Marshall McLuhan’s book (“The medium is the message”) and makes a compelling argument about how the form of our communication directly impacts the content that is conveyed. He also references smoke signals like White & Brown did, which is what made me think of this quote (emphasis added):

It is an argument that fixes its attention on the forms of human conversation, and postulates that how we are obliged to conduct such conversations will have the strongest possible influence on what ideas we can conveniently express. And what ideas are convenient to express inevitably become the important content of a culture. I use the word “conversation” metaphorically to refer not only to speech but to all techniques and technologies that permit people of a particular culture to exchange messages. In this sense, all culture is a conversation or, more precisely, a corporation of conversations, conducted in a variety of symbolic modes. Our attention here is on how forms of public discourse regulate and even dictate what kind of content can issue from such forms. To take a simple example of what this means, consider the primitive technology of smoke signals. While I do not know exactly what content was once carried in the smoke signals of American Indians, I can safely guess that it did not include philosophical argument. Puffs of smoke are insufficiently complex to express ideas on the nature of existence, and even if they were not, a Cherokee philosopher would run short of either wood or blankets long before he reached his second axiom. You cannot use smoke to do philosophy. Its form excludes the content.

Why then, with the boundless potential of digital interaction, do we still struggle with miscommunication and a lack of civil public discourse? Part of the reason may be the sheer amount of information that is loaded into the web each day, hour, and even minute. It’s already almost impossible to keep up with the Niagara of data flooding across our digital screens, and the quantity is increasing at an exponential rate.

A 2017 blog post by Jeff Schultz of Micro Focus revealed that “90% of the data on the internet has been created since 2016, according to an IBM Marketing Cloud study.” The post also references the graphic below, which outlines some staggering statistics about internet usage and data transmission/consumption (by the minute!): 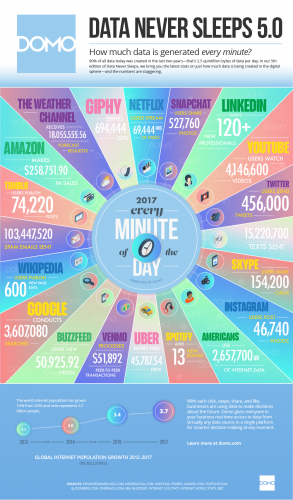 How can we better harness this grand and growing information system to better meet our communicative needs? Does the burden of responsibility fall to us as the producers and consumers of communication data, rather than to simply blame the messenger(s)? What can we expect in the next 5 years in the fields of information, data, and meaning?

Irvine, Martin. “Introduction to the Technical Theory of Information” Feb. 4, 2019.

Postman, N. (1986). Amusing ourselves to death: public discourse in the age of show business. London: Heinemann.

Schultz, J. (2017, October 10). How much data is created on the internet each day? Retrieved from https://blog.microfocus.com/how-much-data-is-created-on-the-internet-each-day/