Machine Learning –  using “algorithms to get computer systems to go through content (images, text) and identify various trends and patterns across all of those data, based on what we have told them to look for (e.g., training it on labeled data – content that a human has already manually classified in some way – toxic or not toxic, abusive or not abusive). This can actually be done on unlabeled data as well, via what is called unsupervised learning – where the algorithm(s) tries to cluster the data into groups on its own).”

Deep Learning –” subset of machine learning– after the system identifies trends and patterns across data by analyzing content, we ask it to constantly improve its probability of accurately classifying that content by continually training itself on new data that it receives.”

1. Extract Curse words (that the programmer has listed as abusive)

2. The second later would count all the curse words up and divide them by the number of words in the text message it appears (to signal severity_

DeepText was firstly successful in spam filtering, and then moved to develop the mean comments elimination. Each person in the developing team looks at a comment and determines whether it is appropriate. If it’s not, he sorts it into a category of verboten behavior, like bullying, racism, or sexual harassment. Until launching in 2017, the raters, all of whom are at least bilingual, had analyzed roughly two million comments, and each comment had been rated at least twice. Simultaneously, this system had been testing internally, and the company adjusted the algorithms: selecting and modifying ones that seem to work and discarding ones that do not. The machines give each comment a core between 0 and 1, measuring the comment is offensive or inappropriate. If it is above a certain threshold, the comment is deleted.

The comments are rated based on several factors, semantic analysis of the text, the relationship between the commenter and the poster, and the commenter’s history. The system analyzes the semantics of each sentence, and also took the source into account. A comment from someone that the user does not follow is more likely to be deleted than one from someone the user does. Also, the comment that repeated endless on Martin Garrix’s feed is probably being made by a human.The technology is automatically incorporated into users’ feeds, but it can be turned off as well. 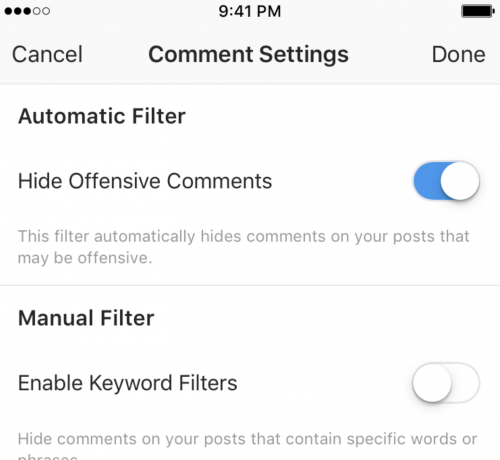