It has been thirteen years since the popularization of cloud computing. Cloud computing has achieved rapid development and dramatic changes, which is another transformation following the one from large-scale computers to the client servers, from the dwindling in size to the cloud in form. Organizations around the world have invested cloud computing and continue to go deep. According to IDG’s Cloud Computing study in 2018, seventy-three percent of organizations have at least one application, or a portion of their computing infrastructure already in the cloud, while 17% plan to do so within the next twelve months. Although cloud computing has been welcomed in the market, the definition of it has not been unified by multi-parties. National Institute of Standards and Technology (NIST) states it as “a model for enabling ubiquitous, convenient, on-demand network access to a shared pool of configurable computing resources… that can be rapidly provisioned and released with minimal management effort or service provider interaction.” There is no doubt that the words need more updates as cloud computing evolves.

Amazon Web Services (AWS), officially launched in 2006 and popularized cloud computing, has maintained its leader role as its market share nudged up a percentage point to 34%, remaining bigger than its next four competitors combined (Microsoft, IBM, Google, and Alibaba). AWS keeps its dominance by dealing with wide ranging of cloud computing facilities developing a highly scalable and an on-demand computing platform, providing the full computing stack in the form of virtual resources.

Among the AWS products, Infrastructure-as-a-Service (IaaS) and Platform-as-a-Service (PaaS) take up the most parts. The users are mainly the system administrators and developers of the enterprises who purchased the services, which help them move faster, lower IT costs and scale. Besides the featured products such as EC2, S3 and RDS, one service called Amazon Transcribe finely leveraged cloud with machine learning. It is an automatic speech recognition service, which takes in audio and automatically generates accurate transcripts, helping developers to add speech-to-text capability to their applications– including customer service, subtitling, search and compliance. 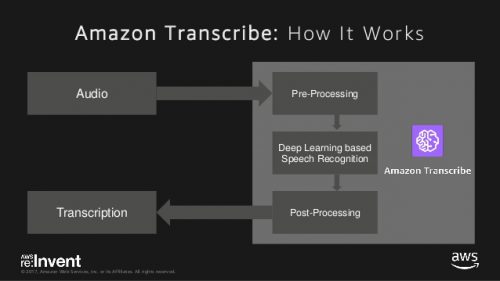 The figure above shows a general routine that how Amazon Transcribe works.