The topic that I am interested most in this week is job displacement caused by artificial intelligence. Many people are concerned about it because AI is replacing human in various fields. To some people’s surprise, it happens not only in those industries requiring merely repetitive work, it is also not uncommon to be seen even in those industries that emphasizes creativity. I once had experience with an AI application which can create posters by its algorithm. Engineers feed AI with a great number of images and slogans to train it, and then it can generate posters based on your needs. Although it sounds fascinating, but the outcome is nowhere near creativity. The basic principle of this AI application is to put different elements together in a poster. It is fine but not organic.

Last year, I attended a speech given by Kai-Fu Lee, CEO of 创新工场, former President of Google China and Author of AI Superpowers. He measures jobs in two aspects—compassion and creativity or strategy—and then divides them into four areas by the two dimensions (see picture). The more compassion and creativity one job needs, the more difficult it can be replaced by AI. So according to Lee, CEO is the least possible to be taken by AI. But in his prediction, artist is comparably less competitive than scientist. I have to disagree with him. 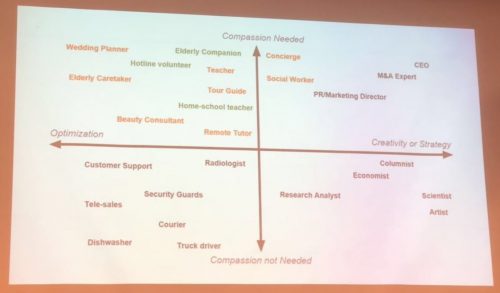 Let’s take painting as an example. Painting skill is not the most important factor when we comment a painting. What really matters is the meaning it conveys or the way it is socially embedded. AI cannot understand human values and cultures as the way that humans do, at least for now.

At present, we shouldn’t be concerned about whether AI will replace the jobs that ask for creativity. However, there is no denying that AI can enhance creative work. For instance, AI can help with the creation of music and script writing.  As the graph below shows, AI will completely replace human force in task-oriented areas in the future. Also, AI can aid people to make better decisions if it is employed in a proper way. 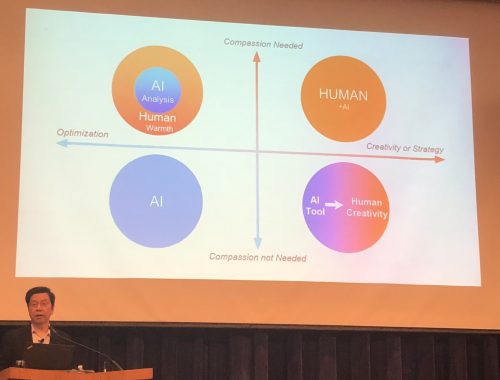 Speech and PowerPoints by Kai-Fu Lee.