Jaime Brown (MBA ‘23) describes herself as an “eldest daughter,” raised by a Buddhist mother and a Christian grandmother. She joined the Georgetown community in 2016 where she started the Black Meditation Group. On the Hilltop, she’s worked as an educator at the Cawley Career Center and as a Harbin Community Director. Our conversation occurred while she was on maternity leave in her home state, New Jersey, and we were joined by her son, Iverson. As a new mom, she’s been spending time with Iverson and has renewed aspirations of spiritual awareness. 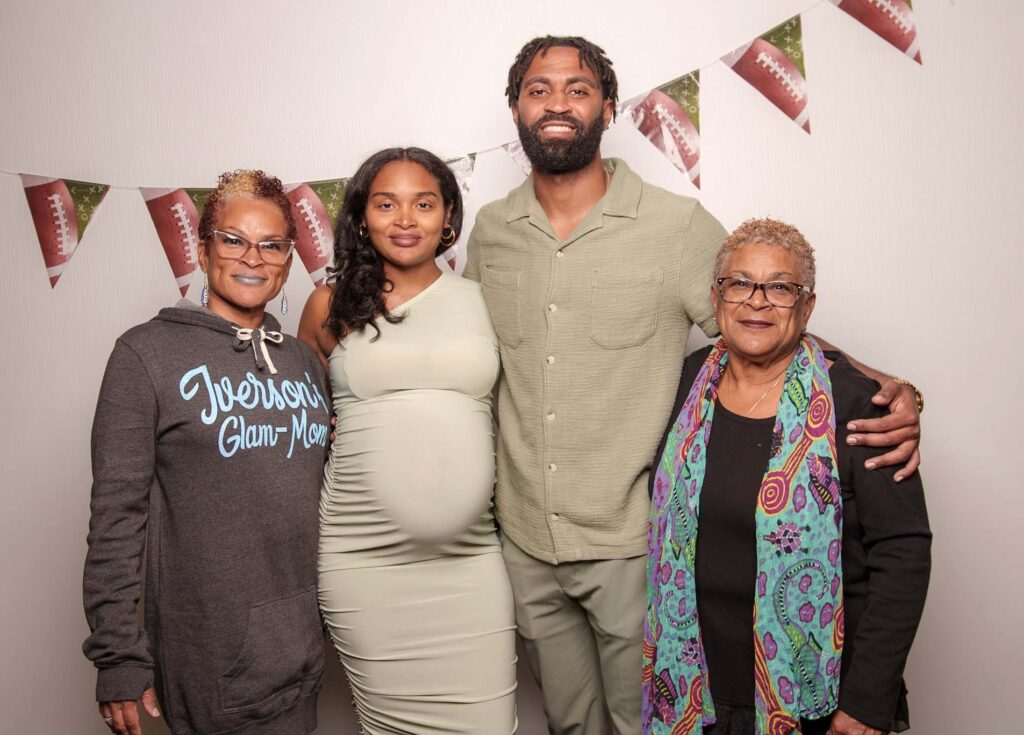 You describe yourself as a ‘work-in-progress’ on a spiritual journey–aren’t we all? What insights would you share with folks on the Hilltop who resonate?

I’m always hesitant to contribute to faith-based things–even this interview at first because my faith isn’t as solid as I want right now. Similarly, when I considered going to Georgetown’s Buddhist retreat, I thought, should I go? I hadn’t encountered other young, Black folks who had a parent that wasn’t Baptist, or Christian.  Ultimately, I reached out to Brahmachari. He’s a real one, very down to earth. We connected because, similar to me, he loved Georgetown but was open to letting Georgetown know when they were not doing right. I ended up going on the retreat and it was a really good experience.

I participated in the Prayer and Daily Life Retreat during the pandemic. We were encouraged to pray daily for a week. I was paired with a mentor, Dr. Jim Wickman, director of Catholic Life who checked in with me every day for 30 minutes to reflect, What’s coming up for you? How does that feel? It was really good. I always encourage people to use Georgetown resources.

What has the John Main Center for Meditation and Interreligious Dialogue, located in Anne Marie Becraft Hall, meant to you?

I love and miss the space. Physical spaces are a huge part of my spiritual connection. They are somewhere I can go to disconnect and just tap in with myself. Ideally, when I get stronger with my spiritual practice, it’ll be with me everywhere I go. I was at the Center heavy in 2017-2018. When I was the Harbin Community Director, it was a huge part of my programming. I would take my residents. It was a space to eliminate phones: DND [do not disturb] or leave it in Harbin. Twenty minutes of stillness. It was a great way for me to start a meditation practice.

It’s major that Georgetown renamed the building after Anne Marie Becraft [an African American nun and educator, (1805-1833)], especially if you follow the history of what other buildings were previously named. [The hall was formerly named after Rev. William McSherry, S.J., a Georgetown Jesuit involved with the 1838 sale of over 270 enslaved individuals that financially kept the university afloat]. More of Georgetown should know this history.

How do you see “Faith that Does Action” at Georgetown?

I saw where faith was a central theme and where it wasn’t. I think the residence halls are one of the better examples.  The chaplains in residence were so helpful in addressing crises—and as someone joining the Georgetown community during the Trump era, there were a lot of crises. At the institutional and student level, there were many examples of people not caring about each other. Beyond just rudeness–there’s disrespect, racism, and misgendering. Georgetown could definitely do better. It’s a Jesuit school and loves to remind people of it. We say, Care for the Whole Person, but beyond “Problem of God”, how else are people learning about the effective principles of faith and actually being a good person? 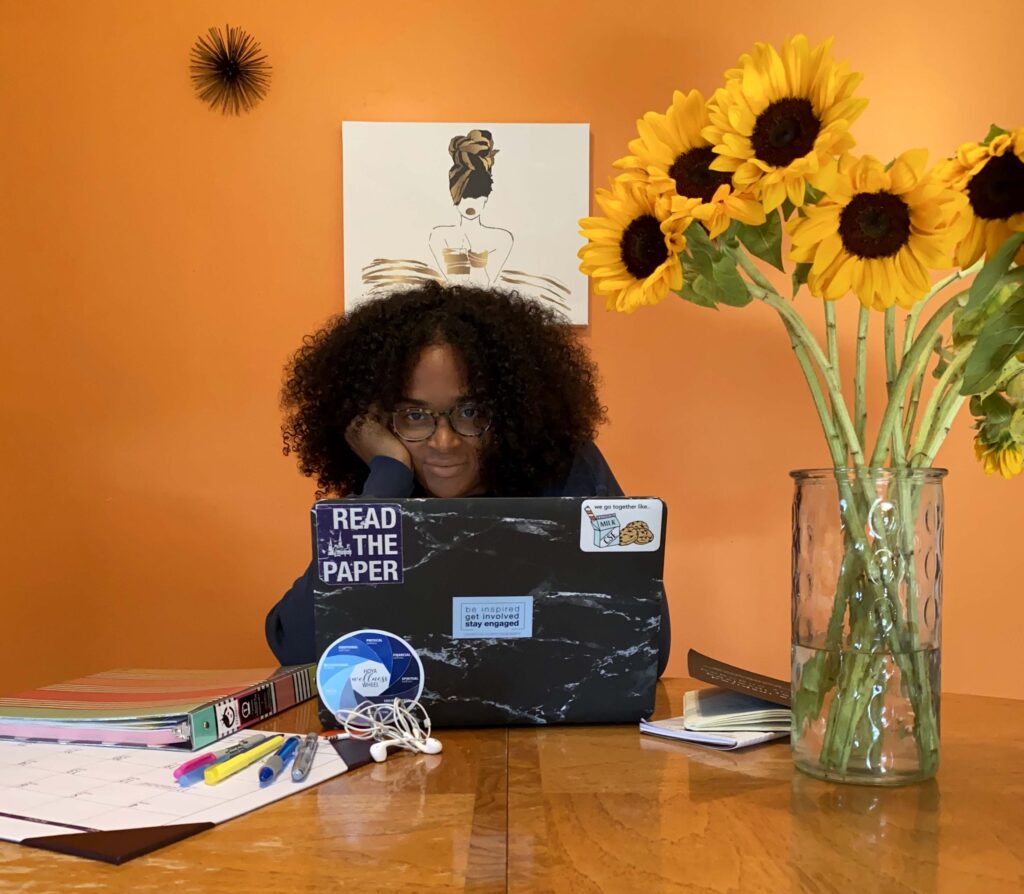 You’ve read some of bell hook’s Teaching to Transgress. I don’t know if you’ve seen the TV show, Abbott Elementary, but–how have faith, humor and joy informed your approach to education?

YES! All caught up with Abbott. [Quinta Brunson] does a good job of using humor and keeping it real. “The budget doesn’t allow for this” or “Oh, these are new books!”. The character Jacob is the best—perfect example of well-intentioned white folks who go about things the wrong way. It’s great that he’s aware, but his awareness is annoying, so it’s fun to watch him. I listen to the podcast, “Nice White Parents” and think of him. I think humor is being used by younger generations to lessen how saddened we are by things in the world. Maybe there’s a faith component to that…

I’m from Trenton–about 45 minutes from Philly [where Abbott is set]. I started out as a substitute teacher at Trenton Public Schools during college summers. Now, I’m at Georgetown which has a completely different population. When I came to Georgetown, I got Teaching to Transgress because I was thinking about my approach to shaping the next generation of leaders. The class I taught, Discerning the Profession: Personal Narrative and Professional Discernment, was about authentically telling your story. For example, if an interview question leads you to bring up Abbott, share why you connect. Maybe you went to a similar school or had a similar job.

I primarily rely on examples surrounding race, gender, and upbringing. I don’t explicitly bring up faith as often, because it’s an area that I need to explore more. However, I use Georgetown’s Wellness Wheel to talk about the importance of being well, holistically. Every year, I write goals for each slice. We’re not going to be 100 percent at all times, but the nine slices help us strike a balance. If your spirit is right, your physical and emotional wellness is going to check out. And when you’re feeling good and loving yourself,  it’s easier to give and help others see that in themselves too. Cura Personalis.

This is interview is part of the Blackness & Faith series by Kawther Berhanu (C ‘19, MSFS ‘22).