Black Catholic History is an Integral, Radical Part of Our History

Posted on April 9, 2021 by Office.of.Campus.Ministry [Organization] 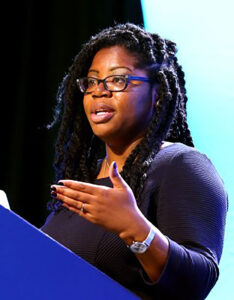 On March 16, Catholic Ministry, the Department of History, along with several other co-sponsors hosted Dr. Shannen Dee Williams for a talk entitled “Black Catholic Historical Truth-Telling as an Anti-Racist Practice.”

In her talk, Dr. Williams discussed the role of Catholics in both promoting racial equality and buttressing anti-Black institutions. She also stressed that “Black history is Catholic history, and Catholic history is Black history.” Unfortunately, however, these two historical narratives are often presented as separate with the linkages between them obscured.

Though she is a Black Catholic herself, Dr. Williams spent much of her upbringing unaware of the significant historical role of Black Catholic women. In fact, the only Black nun she knew of during her childhood was Sister Mary Clarence — a fictional character played by Whoopi Goldberg in the film Sister Act. Dr. Williams says that Black Catholics and Black nuns more specifically have been invisibilized in Black history, Catholic history, and American history, and it’s time we bring them to the fore.

In her research on Black nuns, Dr. Williams “bore witness to a profoundly unfamiliar history that disrupts and revises much of what has been said about the U.S. Catholic experience and the place of Black people within it.” She has found that the Church was “deeply culpable in the histories of white supremacy,” and that it’s time that Catholics and people at Catholic institutions such as Georgetown reckon with the Church’s role in chattel slavery and segregation.

She refuted several myths about the relationship between Blackness and Catholicism, including the idea that the history of Black Catholics in America is “inconsequential” and that the Church was a reluctant participant in institutions such as chattel slavery. To these, she noted that the history of slavery in the present-day United States begins with St. Augustine, a Spanish Catholic settlement in Florida. “The fact remains that the Catholic Church was the first and largest corporate slaveholder in the Americas,” she said. She notes that white Catholics were never “innocent bystanders in the story of slavery.” In fact, Roger Taney, the infamous Supreme Court Justice who decided the Dred Scott case (Dred Scott was an enslaved Black man who filed suit against his owner for his own freedom), was the first Catholic to sit on the bench.

She quoted Sister Loretta Theresa, a Black nun, who said “The Catholic Church wouldn’t be Catholic if it wasn’t for us.” Dr. Williams ended by saying this: “When we are confronted with a silent past, the most radical thing that we can ever do is to tell a story that was never meant to be told.” In this sense, telling the truth about Black Catholic history is an anti-racist practice.

Dr. Williams is the Albert Lepage Assistant Professor of History at Villanova University and is currently working on her first book, entitled Subversive Habits: Black Catholic Sisters and the Long African American Freedom Struggle. You can follow her on Twitter at @BlkNunHistorian.

Jordan is a senior in the College, majoring in Justice and Peace Studies with minors in Disability + African American Studies.