Posted on August 4, 2020 by Office.of.Campus.Ministry [Organization] 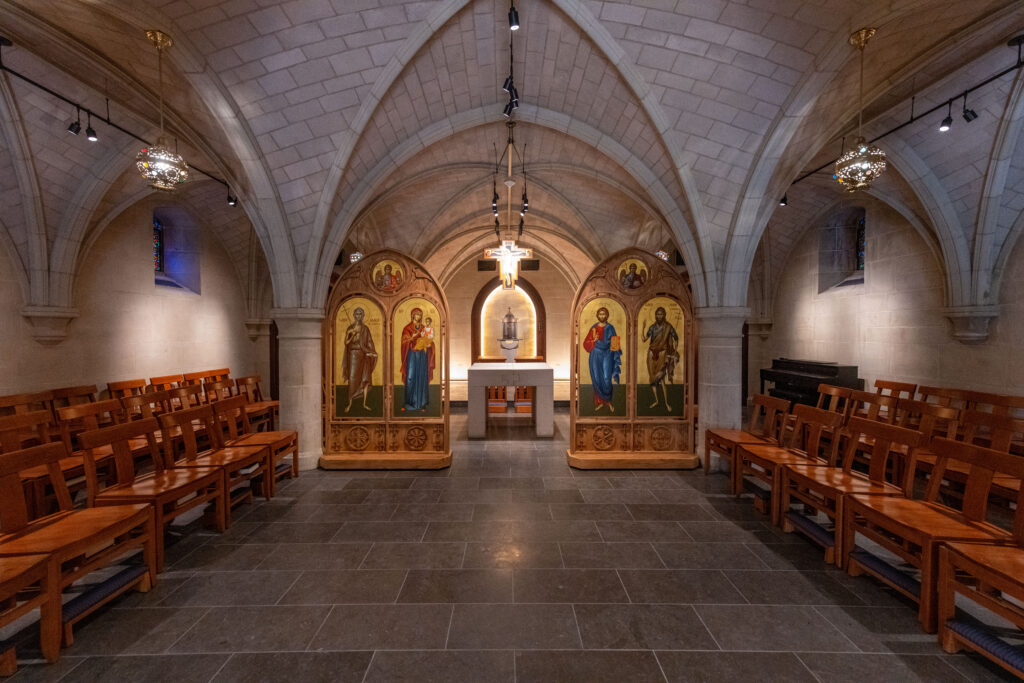 Icons are sacred objects in Eastern Orthodoxy. One reason for their reverence is that they remind us who we are, our dignity and high calling in baptism. Through a very generous gift, Copley Crypt Chapel now possesses a program of icons that are noteworthy for their beauty and uniqueness (pictured above).

They were painted (written) by the noted iconographer George Fillipakis of New York who also guided the design of custom carved frames that harmonize with the Crypt Chapel.

The custom frames, built by Mike Kapetan, make the new Georgetown icons mobile. They can be brought into place to form a traditional icon screen (iconostasis) in front of the altar for worship services while holding forth in specially formed niches when not in use. In this second position, they serve to enhance the devotions of anyone visiting the chapel. 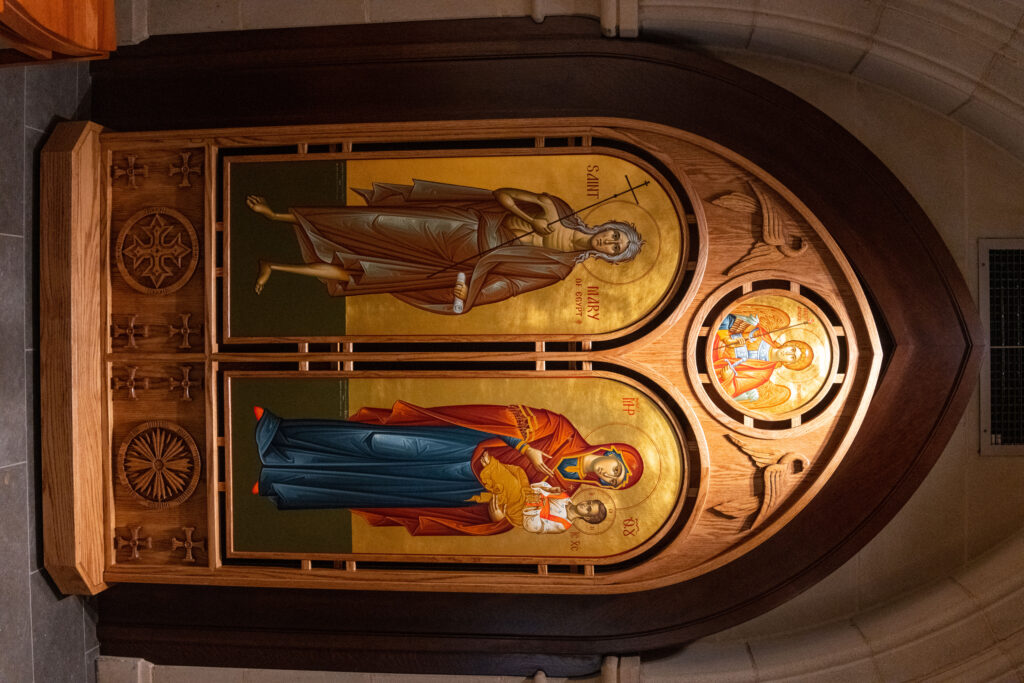 On the left-facing panel (pictured at top, close-up here) is the Mother of God, Theotokos, presenting the child Jesus, which stands for the mystery of the Incarnation, God becoming man. Next is St. Mary of Egypt, the patron of our Orthodox Chaplaincy on campus. Above both panels are medallions of the angels Gabriel and Michael, further punctuating the themes of Annunciation and Last Judgement. 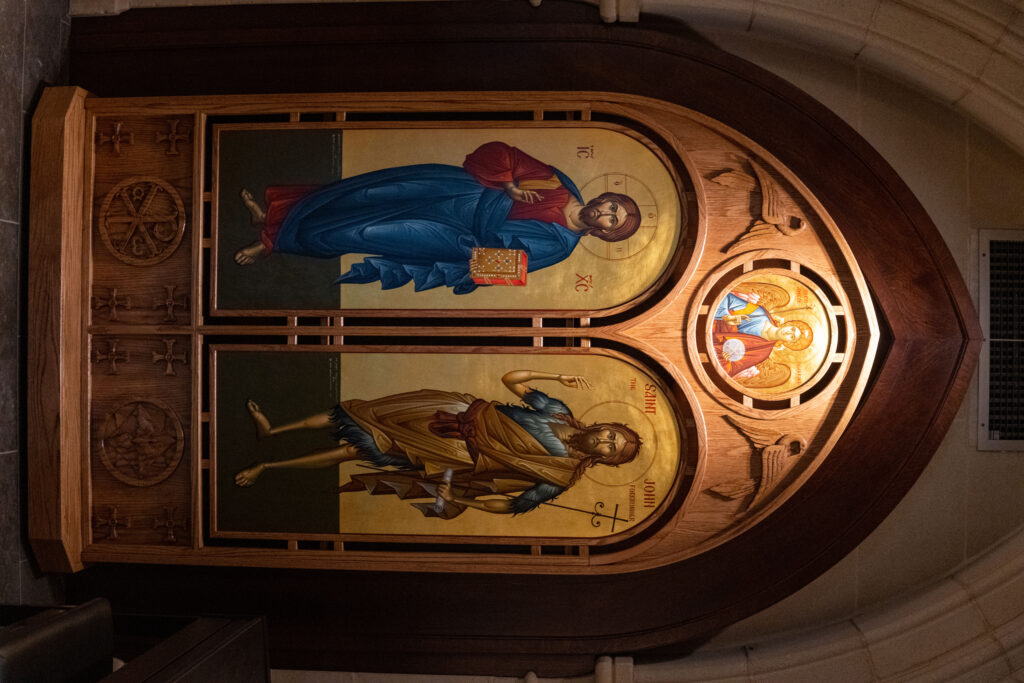 On the right-hand panel (pictured at top, close-up here) is Christ in His Second Coming flanked by St. John the Baptist, called the Forerunner, who points to the Lamb of God.

Another icon is fixed in the back of the chapel, a singular composition of St. Peter embracing St. Andrew (below). It depicts the apostles of the ancient sees of Rome and Constantinople in full historical communion, and the desire for Christian unity both east and west. This special image is a striking piece of iconography in its own right and helps unify the chapel’s visual program. 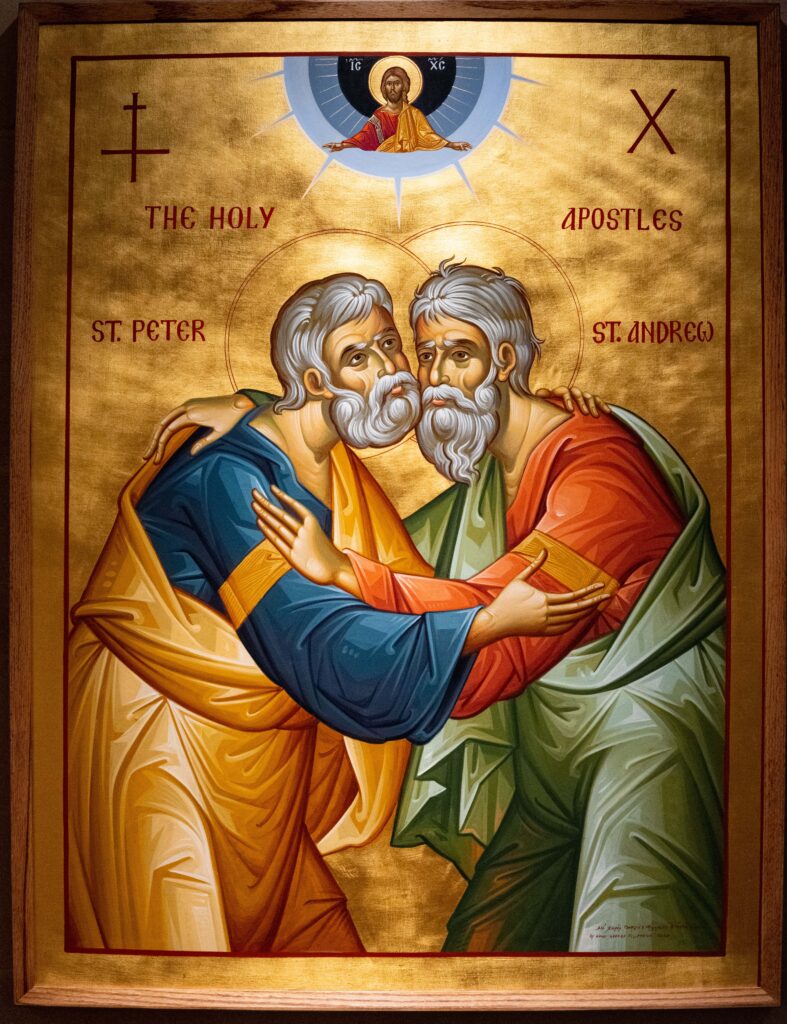 Icons mark the divide between our earthly and perishing world where we find ourselves struggling for salvation, and the age to come which is already enjoyed by the saints in heaven. They also comfort us on our journey to Christ. Little wonder that icons have the nickname “windows on eternity.”