From Lament to Justice: a reflection by Rev. Ebony Grisom

Posted on June 19, 2020 by Office.of.Campus.Ministry [Organization] 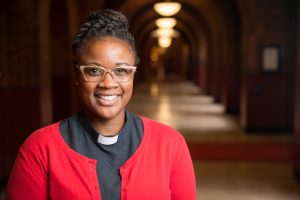 Psalm 13. From Lament to Justice

I reflect on Psalm 13 often.  Most recently, this weekend. #RayshardBrooks. Words fail, yet I know that God sees. I recall this psalm instinctively now. Not as vapid rote, but from muscle memory built by years of lifting heavy history. We’ve been habituated to horror and desensitized to divinity, be it indigenous or Black, since 1492/1619 (give or take). One theologian offers, “Prayer is the ultimate act of faith in the face of the assault on the soul.”  Tonight we bring our battered souls to pray and lament by speaking truthfully to God. Thankfully, the psalmist gives us a model.

Rev. Dr. Cheryl Sanders says that lament “presupposes truth-telling and authenticity.” The psalmist seems to agree because they get right to the point, calling God out by God’s Name. My sanctified imagination sees the psalmist shaking their fist at God because they’re “sick and tired of being sick and tired”.  No more pleasantries. I know you and you know me, so God here’s the thing. The text doesn’t say, but I’m pretty sure that the psalmist is a New Yorker. She sounds like a New Yorker, but her psalm sings from sea to shining sea: Atlanta, Brunswick, Tulsa, Ferguson, Louisville, Minneapolis, Los Angeles.

Irenaeus reminds us that “the glory of God is a human being fully alive.” Yet, here we are in the House of God because human beings are fully…dead. If Irenaeus is right, anti-Black violence steals God’s glory: the humanity of those who cannot breathe and those who extinguish breaths. We mourn human deaths even as we know that everyone dies. But not everyone dies at the hand (or knee) of police brutality and extra-judicial violence.  We lament our world as it is, and long for what it should be.

But I trusted in your steadfast love; my heart shall rejoice in your salvation. (v5) The psalmist’s lament becomes praise when she remembers that God’s Fidelity forged them together.  Walter Bruggeman writes, “the speech of God is first about an alternative future”. God speaks this future in sacred text, and directly to God’s People, including those kissed by the sun.

The psalmist knows that God sees. And when God sees, God acts, always bending the moral arc of the universe towards justice, the prerequisite for peace. Therein lies our hope. Pandemic people who pray pound the pavement. Lucid legislators vow to craft policies for the common good. Corporations commit to systemic change beyond trainings and tweets. People of faith reckon with their toxic theology. Colleges and universities confront their complicity in white supremacy.  Together, we are the people of God.  In 1965, Dr. King said, “…truth crushed to the Earth will rise again.” Last week, 6-year-old Gianna Floyd said, “Daddy changed the world!” How long? Not long. From tragedy we triumph.  God has dealt bountifully, past-present-future.

So, today we join the psalmist and claim our alternative future which is rooted in our past. Psalm 13 ends certain that God will do what God has already done. The psalmist’s shaking shake is now uplifted. Mere mortals get nervous because they don’t see divinity. They don’t see that two fists meet. God and the psalmist touch and agree that God’s Will be done on Earth as it is in Heaven. Together, they say: Black Lives Matter.