Posted on May 7, 2020 by Office.of.Campus.Ministry [Organization] 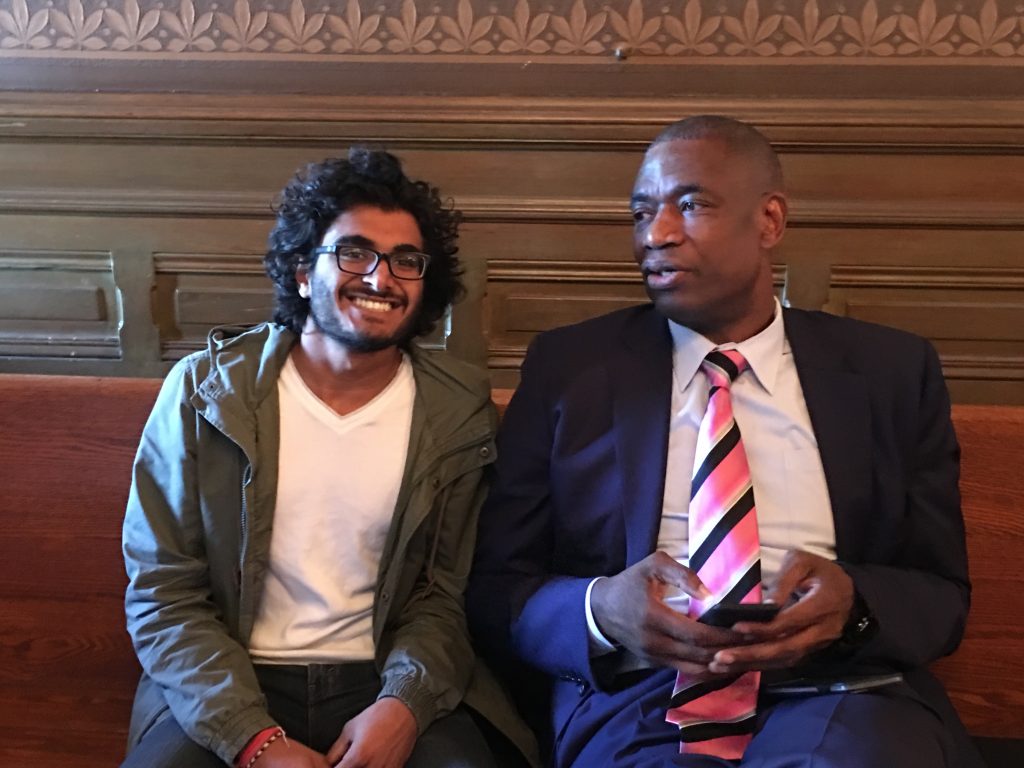 Although there is no guarantee that a former NBA basketball star will be at Campus Ministry’s Chaplain’s Tea, it certainly can happen. For Ojus Jain (SFS’21) it happened during his 2017 fall semester.

“I first got involved with Campus Ministry at a Chaplain’s Tea early my freshman year,” he says. “I remember meeting Dikembe Mutombo (C’91) in the Healy foyer as I waited for [Chaplains’ Tea] to begin.”

While meeting Mutombo that day was, to say the least, unexpected it wasn’t the reason he decided to become more involved with Campus Ministry. Jain credits meeting Brahmachari Sharan, the director for Dharmic Life at Georgetown for influencing that decision.

“That was also the first time I really had the opportunity to speak with Brahmachariji outside of the traditional ‘welcome to Georgetown’ context, and that interaction served as the foundation of our relationship,” says Jain.

Since then, he became more involved with Dharmic life and Campus Ministry which has also given him an appreciation of interreligious programming, something he looks forward to resuming in his senior year.

“Personally, I have found interreligious understanding [one of the tenants of the Spirit of Georgetown] to be an important part of my Georgetown experience,” says Jain.

“I think it is a cool and unique aspect of Georgetown student life. I have really learned that what brings people together is always much bigger (and better) than what may set them apart, and I think that is an important lesson for every person wishing to be a positive member in society,” he adds.

As Jain prepares to return to school in the fall, he says he also looks forward to strengthening his bonds with his peers and reclaiming the normalcy he once had as a Hoya. Until then, however, Jain is prepared to make the most of the uncertain times by reminding himself that change, along with uncertainty, is a fact of our existence and that aside from doing his part to flatten the curve and stay healthy the pandemic is out of his control. “That much is out of my control. What is in my control, however, is how I choose to orient myself during all of this,” Jain says.

He also says there is a verse from the Bhagavad Gītā (Chapter 2 Verse 28) that he keeps in mind: