The Yamuna River: an environmental, spiritual and public health crisis

Posted on February 6, 2020 by Office.of.Campus.Ministry [Organization]

Magis: India participants at a water treatment facility in Agra.

Over the winter break, a group of Georgetown students participated in the Magis: India immersion trip. Led by Brahmachari Sharan, director for Dharmic Life & Hindu Spiritual Advisor and Dr. Jim Wickman, director for Catholic Life and Campus Liturgist, the trip centered on health and environmental disparities in and around New Delhi, in particular, those that are related to the pollution of the Yamuna River, a major tributary of the Ganges River. Magis: India participant Anna Naiyapatana (SFS’ 21) shares her reflection of her experience on the trip.

“I honor the divine river Yamunā, whose beautiful waters make even heaven look as insignificant as a blade of grass… You wash away the misdeeds of all beings, removing our arrogance: may you please wash away the impurity from my mind always.”
– Vallabhacharya (1479-1531), Yamunastakam  (An ode to Yamuna)

In front of me stood the ivory-white mausoleum, one of the seven wonders of the world; yet my gaze was fixed elsewhere. Flowing beside the Taj Mahal was the Yamuna River. Its water was dark in color, not clean but neither murky nor putrid. The condition of the Yamuna at India’s most renowned tourist attraction was nothing like what I and the other Magis: India participants saw in New Delhi. There, the water was dark gray, almost black, acrid foam floated on top, and the riverbank was covered with garbage. It was as if there were two different rivers, rendered distinct through privilege, negligence, and injustice.

Before flying to India, the Magis: India team watched a documentary called The Stolen River which focuses on the pollution of the Yamuna. However, watching the film cannot compare to seeing the polluted river in person or hearing directly from the people whose lives are directly affected by its degradation. During our visit to Sandipani Muni School in Vrindavan, a city considered to be one of the most sacred places in Vaishnava Dharma (one of the three monotheist Hindu Dharmas), the schoolgirls described to us the spiritual significance of the Yamuna and that it is believed that the water cleanses devotees of their sins and illnesses. They also told us about family members who have gotten sick from touching or consuming the water and how it saddened them that the water described as pristine in the scriptures has become so poisonous. One girl remarked that the water was so toxic — it had caused skin disease to a family member — that her family could not even use the water for Wudu (Muslim ritual ablutions), having to use sand instead. 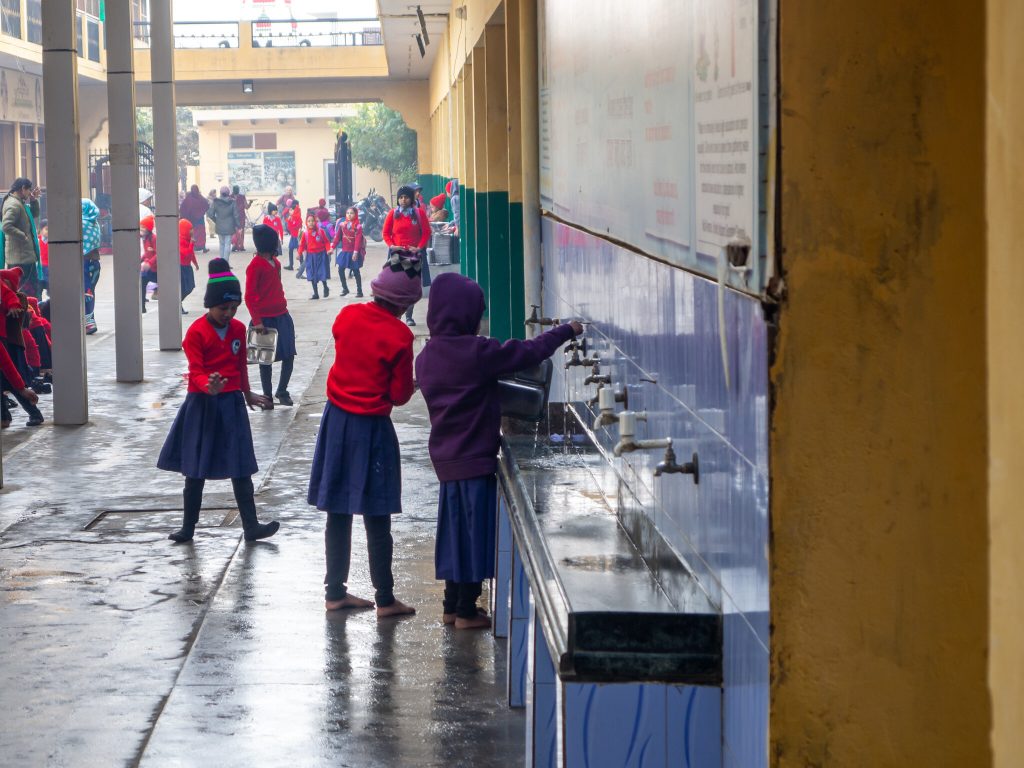 School girls at the Sandipani Muni School getting water during their lunch break.

The pollution of the Yamuna River is not just an environmental crisis — it is also a spiritual crisis and a public health crisis. The school had organized multiple volunteer events to try to clean up the river, but their communal efforts could not address the sources of pollution: urban and industrial waste.

To better understand what is being done to address this environmental and health crisis on a larger scale, we visited government agencies, local water treatment facilities, environmental NGOs, as well as private sector groups — to name a few, the National Mission for Clean Ganga, the All India Institute Of Medical Science, Sulabh International, and Toxics Link. Each place had a different approach to and varying scales of engaging with the crisis.

While government agencies have introduced many policies to try to improve the condition of the water, they are often challenged by political and economic interests with differing priorities.  The organization visits made me realize the complexity of environmental justice and that there is no easy fix especially when there are so many competing interests. Unfortunately, unless there is increased cooperation between various sectors and cleaning the Yamuna becomes a priority, the condition of the river will continue to deteriorate.

Onboard the plane flying back to the United States, my stomach churned with an uncomfortable thought. Unlike me who traveled to India on a school field trip to learn about the polluted Yamuna, the schoolgirls at Sandipani Muni School cannot fly away from the problem. They are living with pollution. As the globalized economy demands increased production from the industries that polluted the Yamuna, the American consumerist lifestyle becomes increasingly more connected to the worsening condition of the river. If that is the case, with my privilege and personal consumption habits, I am personally culpable.

The question then becomes, what is my personal responsibility in this environmentally-deteriorating world? Where am I to be held accountable? How can I contribute to change? Will the changes I make have any meaning if there is no structural change in the global economic system? I am still jostling with these questions, and I have not yet found a satisfactory answer. Yet, these questions have directed me to navigate the world with deeper consciousness and contemplation over my actions.

Magis Immersion trips are part of Georgetown University’s Alternative Breaks Program (ABP) where students spend their school breaks learning about intersecting social justice issues. As a collaborative trip between the Office of Campus Ministry and the Center for Social Justice, the Magis trips observe the connection between faith and justice.