Posted on November 8, 2019 by Office.of.Campus.Ministry [Organization] 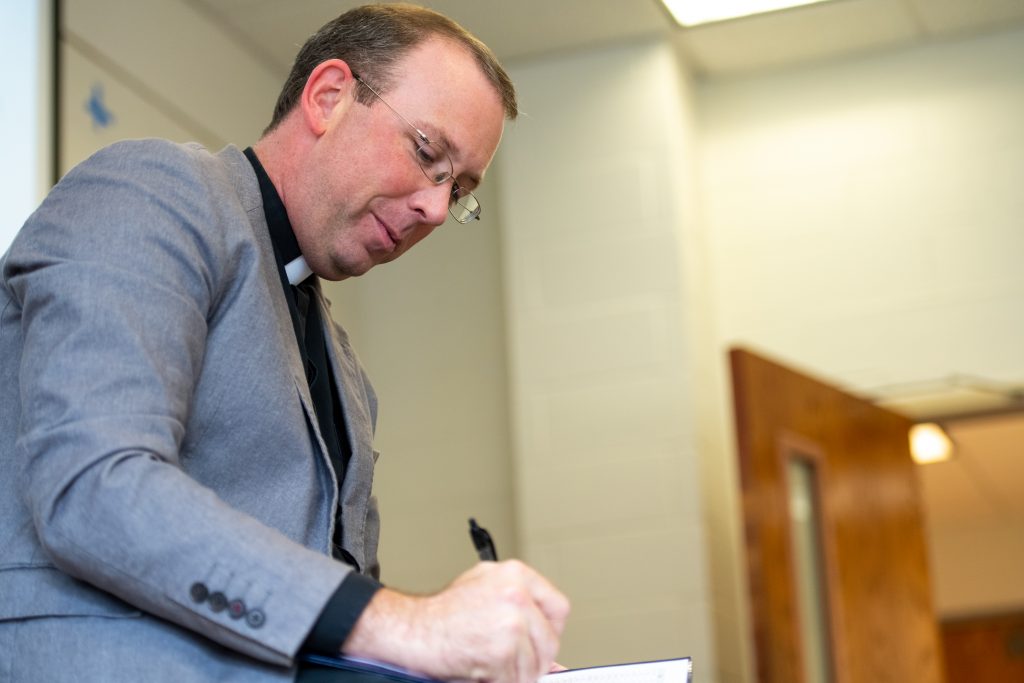 This fall, Georgetown University welcomed Fr. Peter Folan, S.J., (pictured here) to the Hilltop. He joins the Georgetown faculty from Boston College, where he obtained his Ph.D. and taught theology to undergraduate students. Folan brings to Georgetown a lifelong passion for faith, education, and Jesuit values.

Folan grew up in a religious family but didn’t realize his passion for Christianity until high school. Having previously attended public school, Folan was deeply impacted by his Catholic high school’s theology curriculum.

This zeal for theology, fostered in his teens, prompted Folan to consider attending a Catholic university. “It was really that decision to attend a Catholic high school which made me say, well, hold on, Notre Dame’s a possibility,” said Folan.

Folan’s interest in religion continued to grow in his time at Notre Dame. Upon graduating, he obtained a job at the U.S. Conference of Catholic Bishops (USCCB) and it was this position that sparked a desire to become a Jesuit. “I was really getting a lot of energy out of it, really loving it. And that emboldened me to make an application to the Jesuits,” said Folan.

During his tenure at the conference, he was on the Jesuit’s radar. “I was meeting with Jesuits and having conversations with them,” he said. So it wasn’t a surprise when he applied. In fact, Folan credits the Jesuits living at Georgetown at the time for helping to influence his decision.

When asked about his greatest passions in life, teaching is at the top of his list. Folan first became interested in education while working for the USCCB and ultimately took a teaching position at Bishop McNamara High School in Maryland. “I just absolutely loved it. I love the school, the kids, and my colleagues. I felt like it was a scandal that they were even paying me because I enjoyed it so much,” he said.

It was at Bishop’s where Folan cultivated his passion for teaching. Since then he taught high school before entering the Society of Jesus, philosophy as a Jesuit scholastic, in his first year as a priest he taught at the elementary school across the street from Georgetown University and then at Boston College as a graduate student. “My love for education has been with me for a long time,” he added. 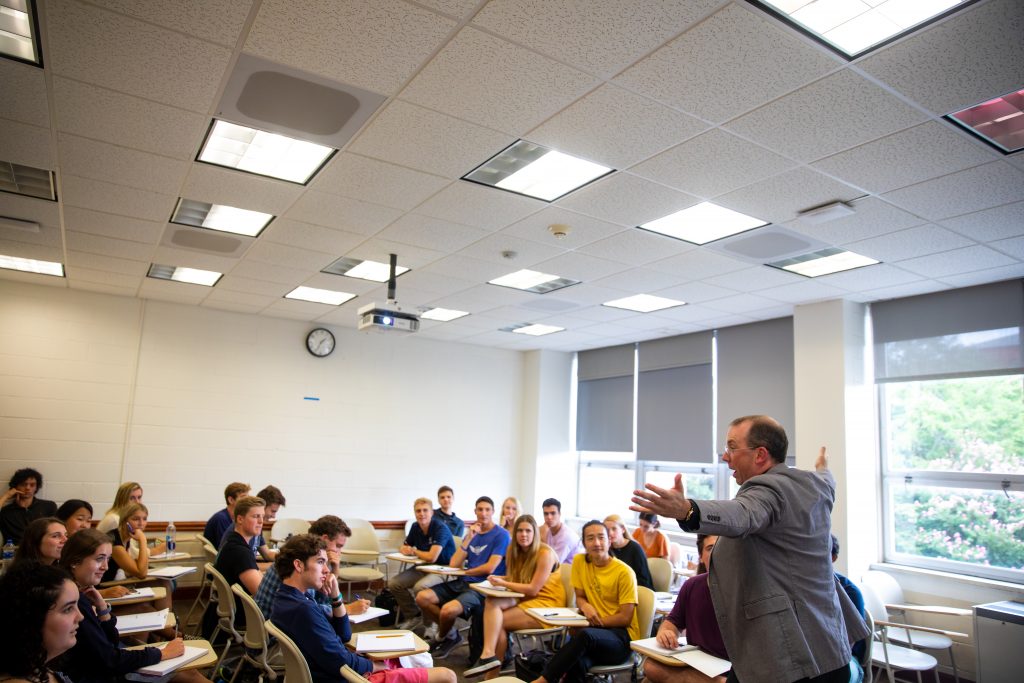 Now, Folan is a faculty member in the Department of Theology & Religious Studies. This semester, he is teaching a section of Georgetown’s renowned course, The Problem of God. The course, intended for freshmen, is designed to introduce students to different religions while encouraging critical reflection on questions related to religious commitment.

Folan uses the Problem of God to discuss a growing demographic known as the ‘nones’ or the religiously unaffiliated. A segment of the population who do not identify with one specific religion, or with any religion at all. “[For example,] you might answer a survey that asks about religious preferences, and it lists, Catholic, Lutheran, Methodist, Muslim, Jewish, Hindu, etc., and at the bottom, none of the above,” explained Folan.

If you don’t identify with any of the traditions listed you will probably select ‘none of the above,’ hence the name ‘nones’. This response does not say anything about a respondent’s religious identity only what they are not. “[This] does not mean you’re an atheist, it doesn’t mean you’re an agnostic, it doesn’t mean you’re a terrible person,” said Folan. “This is what is so interesting about the category of the ‘nones’: simply checking that box only begins to reveal all the nuances in the way ‘nones’  believe.”

According to the Pew Research Center, there are many reasons why young people are identifying as religiously unaffiliated including something known as “generational replacement,” “the gradual supplanting of older generations by newer ones,” or perhaps they come from multi-faith families where more than one religion is observed.

Folan says it is important in his class to acknowledge the unaffiliated group in order to highlight the shared concerns between them and religiously affiliated students. Research shows that unaffiliated young people are just as concerned with service and treating people well as their counterparts. “There’s a real attraction to something like the Parable of the Good Samaritan from Luke’s Gospel,” said Folan. “So, I’m organizing the course according to some of the movements of that parable.”

Fr. Folan is excited to join Georgetown and is thoroughly enjoying teaching his section of the Problem of God. We are excited to have Fr. Folan here at Georgetown.