Posted on October 23, 2019 by Office.of.Campus.Ministry [Organization] 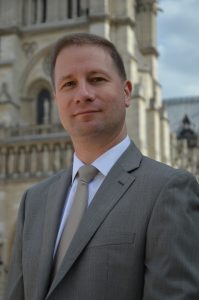 On October 28, Georgetown will welcome Mr. Johann Vexo in recital at Dahlgren Chapel of the Sacred Heart. Mr. Vexo is an organist at Notre Dame Cathedral in Paris and the Cathedral of Our Lady of the Annunciation in Nancy, France.

Campus Ministry’s staff writer, Dustin Hartuv, reached out to Mr. Vexo by email to ask him about his career, his background in music, and his hopes for the future.

Q: Did your religious or spiritual background influence your decision to pursue a career as a professional organist?

A: My decision to pursue a career as a professional musician is not connected with any religious or spiritual background. My grandmother played the harmonium in the church of the small village where I grew up and I used to attend the Masses next to her when she played. When I decided to learn the organ, it wasn’t for church use but for the musical instrument itself.

Q: By age 25, you were appointed Organiste de Choeur at the Cathedral of Notre Dame in Paris and soon after the Organist of the Cavaillé-Coll organ of the Cathedral of Our Lady of the Annunciation in Nancy. What was it like to have your career progress so rapidly?

A: Of course I was very happy to become organist at Notre Dame at 25; I was still a student. I was still studying pedagogy at the Paris Conservatory and I had just received my organ performance degree. The position there opened at the perfect time for me; I was totally free and available for the Cathedral. It was right after my organ studies so I was still in the dynamics of taking part in competitions and I already had experience playing services.

The following year, after receiving my pedagogy diploma, I was appointed professor of organ in Angers in western France. Nancy came a few years later, in 2009, even though I had already replaced the organist at the Cathedral regularly.

I can now say that I’ve been very lucky. Even with the same studies, degrees, background…everything might have been very different. Apparently, I was in the right place at the right time.

Q: You have performed around the world and next week you will perform at Georgetown in Dahlgren Chapel of the Sacred Heart. Your performances will include a French-style Mass on Oct. 27 at 9:00 p.m. and a recital on October 28 at 5:30 p.m.  For the uninitiated, explain the difference in these performances? Is there a different style of music?

A: The difference is not really about the style of music — I mean French-style or not. When people come to the church, they first come for the service itself. Music is a part of it, but not the most important. For my part, I mostly improvise during services, which I think is the best way to really fit in the liturgical action, to create a specific atmosphere or just to play the perfect duration.

The concert is very different: people come to hear the instrument, the music, the artist… So you also have to create different feelings according to the different pieces, which have to stand on their own and don’t have the benefit of accompanying a liturgy.

Q: Currently, you are planning your Fall 2020 Tour. How does international travel influence your perspective on music?

A: When you have the opportunity to travel for performing concerts, every concert is a new discovery: new places, new people, new acoustics, new organs with varying quality. Musicians are fortunate to be fed on every new experience.

Q: You were playing the night the fire broke out in Notre Dame. What was it like, considering both the importance of the cathedral to France as well as your own musical career? How do you envision the future of both the Cathedral and your role as its organist in the wake of this tragedy?

A: The fire on April 15 was a real tragedy for everyone in Paris, in France, and the entire world. I felt it while speaking with lots of people, journalists from France or abroad. For the Cathedral employees, it was a disaster. The organists have a special relationship with this amazing building as we used to practice organ when the Cathedral was closed at night. We had the whole building to ourselves and were so privileged to enjoy these special feelings.

This entry was posted in Uncategorized and tagged Catholic. Bookmark the permalink.