Posted on October 9, 2019 by Campus.Ministry.Communications [Organization] 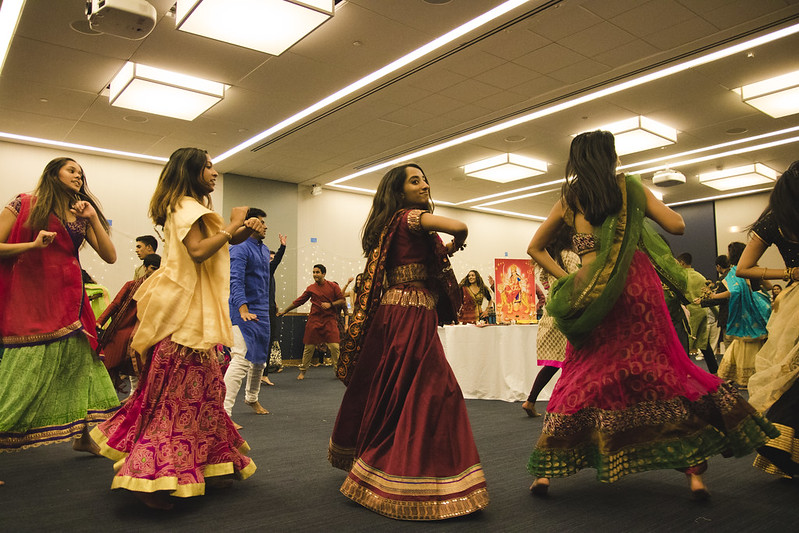 I attended Navarātri Garbā on behalf of Campus Ministry. There, I had the opportunity to talk to Brahmachari Sharan, director of Dharmic Life and ask him about the significance of the feminine.

“Well, the obvious answer is that life wouldn’t exist without the feminine,” he said. ‘And in the Dharmic understanding of life, there’s the feminine in female bodies, in male bodies, and in non-binary bodies. Humans have honored and treasured this since the beginning of intelligent life, and especially so in Śhākta Dharma, one of the oldest extant spiritual traditions wherein this festival originates.”

The evening began with an ārati, a Hindu meditation and ritual, then moved into Garbā, a dance. Each segment of the dance begins with a simple step everyone could do and then escalates as the songs, traditional but with added bass, swell, into a more experienced choreography.

I asked a couple of student participants (both asked not to be identified) what “honoring the powerful feminine” meant to them. They said, “being supportive of other women. We can’t give in to the expectation that women should compete with other women. We’re on the same team.” Another answered that honoring the feminine meant “highlighting traditionally feminized and therefore marginalized forms of labor.” These students may have focused on the problem-to-be-solved aspect of honoring the feminine and while that’s easy to understand, looking at the world today, Navarātri is meant as a celebration.

Brahmachari said that honoring the feminine is about expanding what the ‘powerful feminine’ means. “It’s not merely the chaste motherly figure that should be honored, but the talented young dancer, the valorous kickboxer, the passionate dancer, the committed politician, the innovative scientist, and all other varieties of the manifested feminine,” he added. “All feminine is worthy of our respect.”

Navarātri Garbā is also a harvest festival. It celebrates the human connection to mother Earth, and is carried out in the hope that “ by recognizing this connection, we pledge to use her bounty for the benefit of all living beings and the Earth herself,” said Brahmachari.

For me, the powerful feminine is captured by the essence of Nannie Helen Burroughs. Burroughs was a Washingtonian educational reformer in the early 20th century, who opened the first pre-professional school for black women in the country. For me, Burroughs captures both the heart of Brahmachari’s definition of the feminine, of expanding potential and the concerns of the Georgetown students, the powerful feminine as the overcoming of opposition.

Jonathan Compo (COL’20) is a staff writer for Campus Ministry.