Posted on March 25, 2019 by Office.of.Campus.Ministry [Organization] 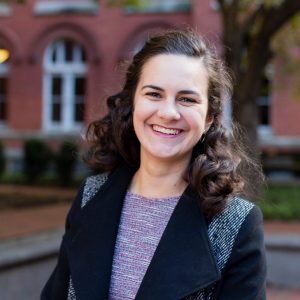 Several months ago, as summer came to a close, and I along with a group of Georgetown students finalized our preparations for the Center for Social Justice’s pre-orientation program, the Attorney General of Pennsylvania released the state’s grand jury report on the Catholic Church’s clerical sexual abuse crisis.

I distinctly remember people bustling around me to attend to various tasks as I read in disbelief about the Bishop of Pittsburgh, — my bishop — David Zubik’s response to the report, and his claim that during his 30 years of association with the diocese there were no cover-ups. I could not believe that someone who I had trusted could make such a claim. I entered this school year awash in emotion — anger, sorrow, distress — and with an intense desire to learn more about the Church’s structural issues.

I attended two events last semester Taking Action Amid Crisis for the Catholic Church featuring Patricia McGuire, president of Trinity Washington University, and the Dahlgren Dialogue A Path Forward on the Clerical Sexual Abuse Crisis. Both events were informative and helped to frame my understanding of the crisis. However, I found the Taking Action event was also incredibly empowering. McGuire a laywoman and a pragmatist explained that her expertise lay in problem-solving rather than theology as she suggested that the Church must involve the laity in its decision-making processes to ensure greater accountability concerning the sexual abuse crisis.

I felt empowered by McGuire’s suggestions. As a lay person, I also believe the Church is more than its clergy, it belongs to the laity as well and it should be involved in how the Church operates and how it addresses the clerical abuse crisis. In addition to arguing for more laity involvement, McGuire also said the Church should involve women more fully in its structure.

As a young woman involved in the Catholic community at Georgetown, I appreciated McGuire’s call to action to young people and for the Church to recognize the importance of women. I realized, that to enact the change I want to see in the Church, I will need to actively and critically engage with the institution. I speak only as one woman in the Church, and the experiences of other women will determine the action which they desire to take.

As McGuire concluded her talk she reminded us that a commitment to human dignity is a principal tenet of Catholicism and, although the Church commits itself to the protection of all life, the actions of some priests and bishops across the country and around the world demonstrate a lapse in this commitment. The lives of survivors and their families are forever impacted by the desire of individuals inside and outside of the Church to maintain a power structure that benefits them at the expense of some of the most vulnerable people. I am motivated by my anger at this breach of trust to become involved in reforming the Church and by my hope that it is possible to affect change.