Standing for Solidarity, Marching for Change

Posted on April 12, 2018 by Office.of.Campus.Ministry [Organization]

On the morning of Saturday, March 24, Campus Ministry hosted students for a special interfaith prayer, breakfast, and reflection before walking together to Capitol Hill for the March for Our Lives, a national student-led demonstration in support of tighter gun control. Several students were deeply moved both by the events leading up to the march and the march itself – they share their thoughts here: 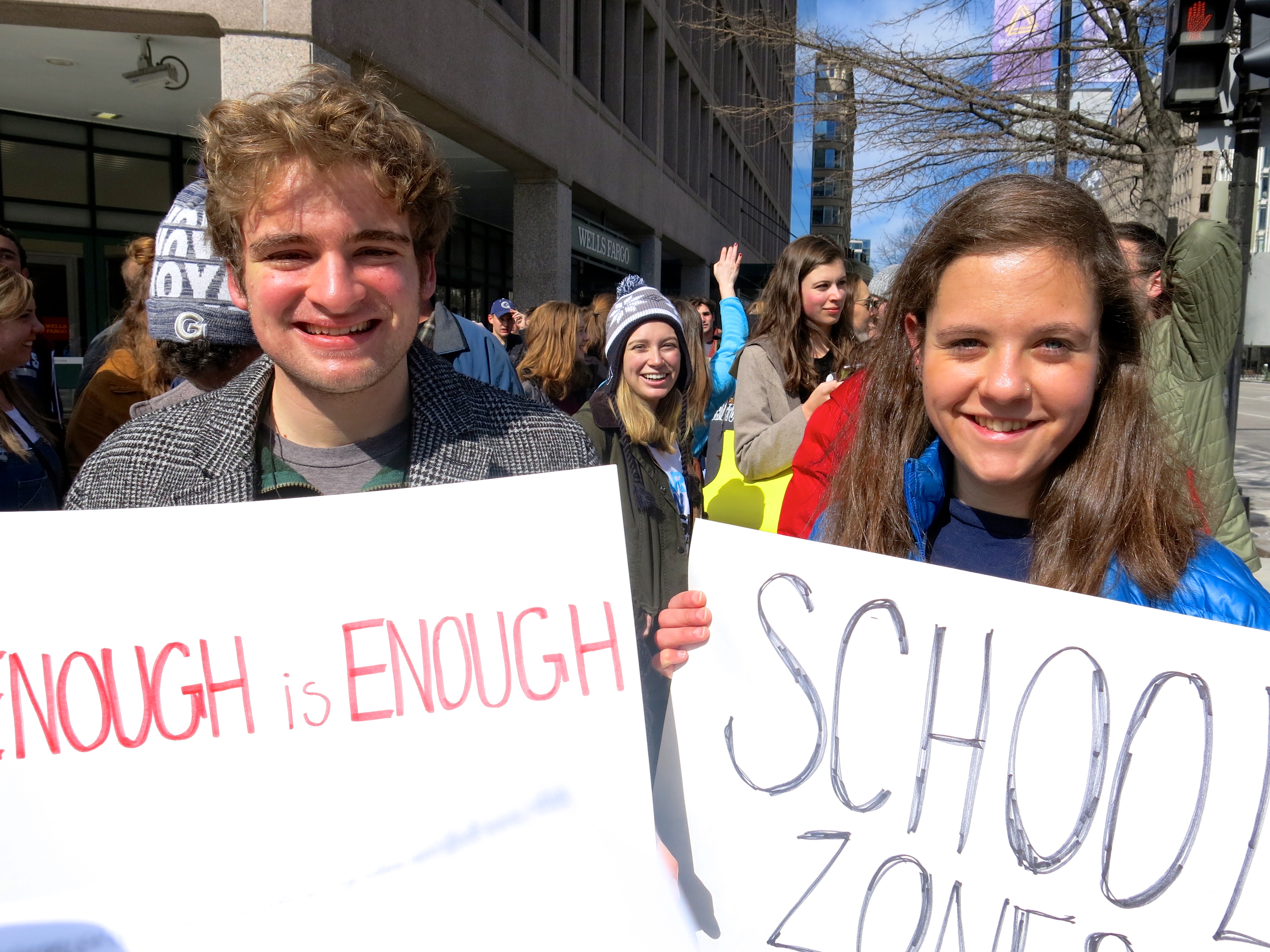 Jack Thorman (left), Jewish: I felt incredibly lucky to be at the March for our Lives on Saturday. For the first time in a while, I felt hopeful for the future. It was a statement from our generation that we will not sit idly by as long as those in power continue not to represent our interests. I also could not have been more proud of Campus Ministry than I was on Saturday. The Jewish community and the wider Campus Ministry at Georgetown continue to be spaces that inspire and embolden me to speak up in the face of injustice. 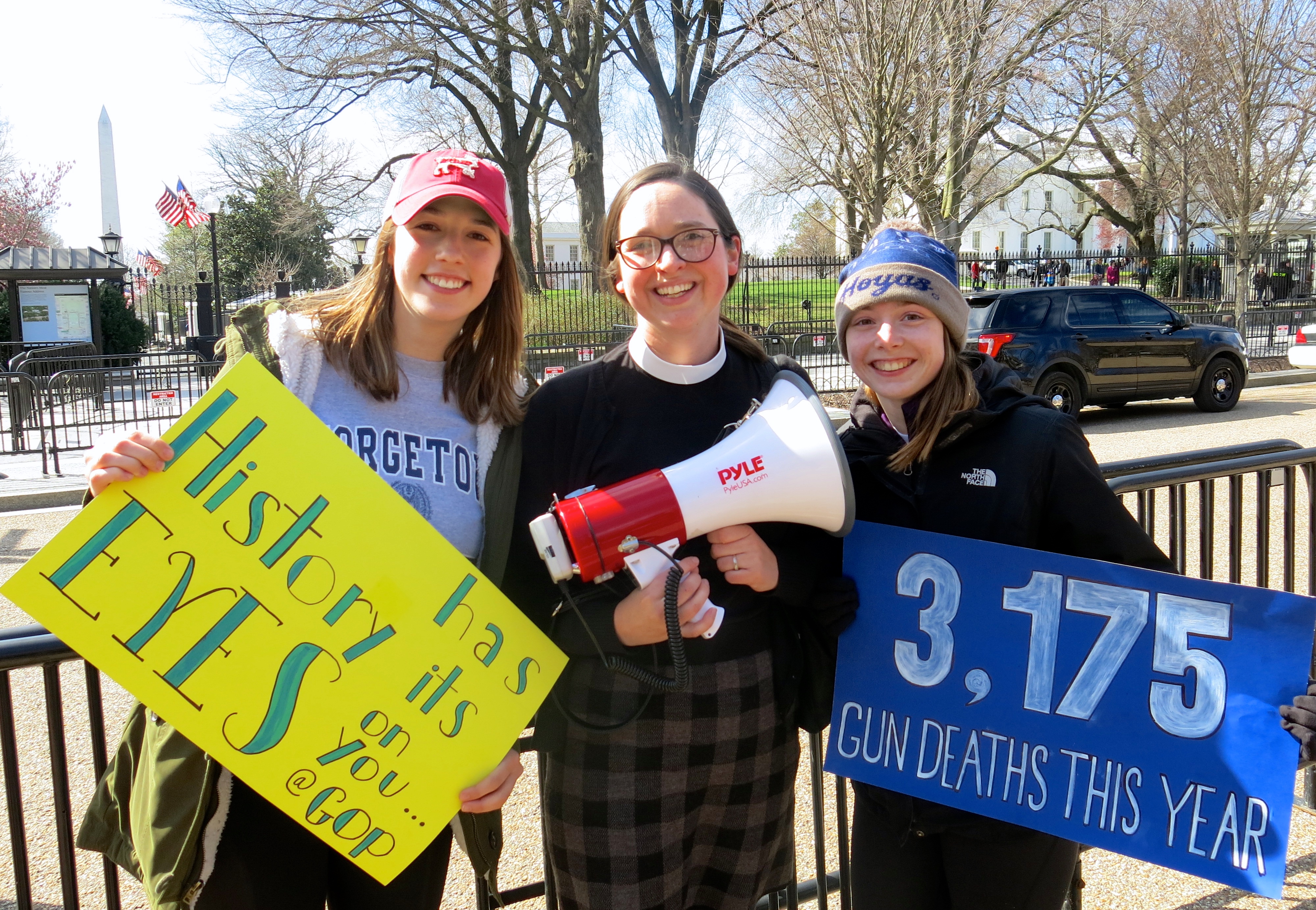 Andrea Dressel (left), Lutheran: I am so thankful I was able to attend the march on Saturday. For the first time in a while, I feel as though my opinion as a young person in the political sphere is important and even necessary, and this validation was a breath of fresh air. I am also grateful I was able to attend with an interfaith group of Georgetown students and faculty. As a Lutheran, my personal faith practice animates much of my social justice work, and I love having a faith community here at school that lifts one another up in doing God’s work. I’m inspired by the love and passion I saw on Saturday and I pray that it will continue in the coming months to build a safer world.

Rev. Becky Zartman (center), Episcopalian:  Within one week in March, Commonplace, the Episcopal-Lutheran campus ministry, went to go see Wrinkle in Time and also attended March for our Lives. These events may seem unrelated, but they aren’t. Written by a faithful Episcopalian, Wrinkle in Time is the story of an unlikely heroine’s dangerous quest to retrieve her father and fight the forces of evil with no weapons, no violence, no killing. On her quest, the main character, Meg Murray must trust a strength that looks like weakness, rely on faith that looks like foolishness and defeat evil not with evil but with goodness and love. When we, as individuals, choose the non-violent struggle against the evil that permeates our world, we are all Meg Murray. Even though our peaceful witness seemed like foolishness to those who prefer the power of guns, this is how love defeats violence. We can do this. We must do it. 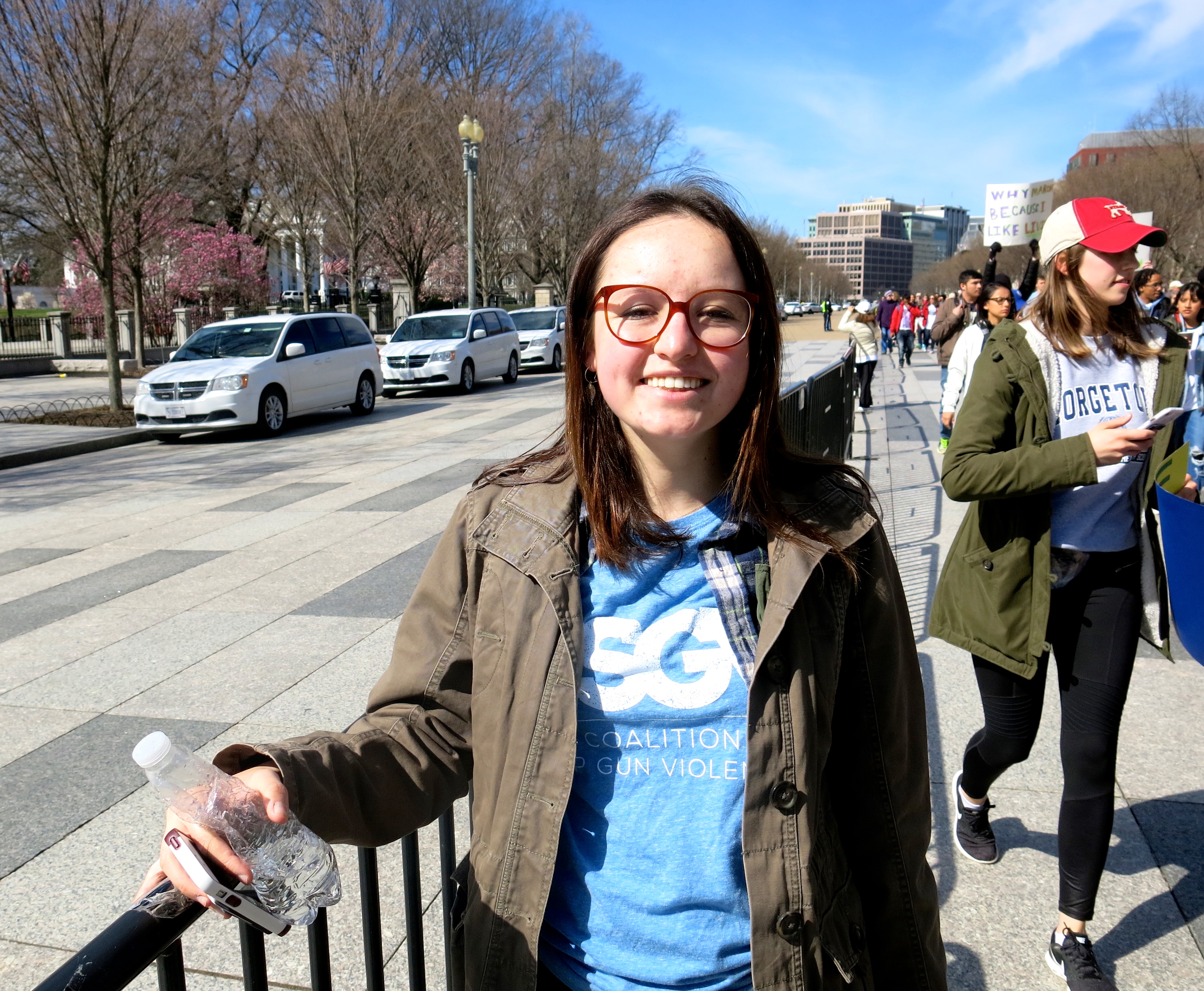 Claire Goldberg, Jewish: The March for Our Lives was one of the most uplifting and inspiring things I’ve ever participated in. Getting to see people from all backgrounds, all walks of life, seeing the Veterans for Gun Reform, seeing all the people from the Religious Action Committee, struck me with so much love and hope. Gun violence is an important issue to so many people for so many different reasons, and to get to see students participate in an interfaith prayer before the march and then rise to action proves that it’s not just thoughts and prayers that matter, its action, and organization. 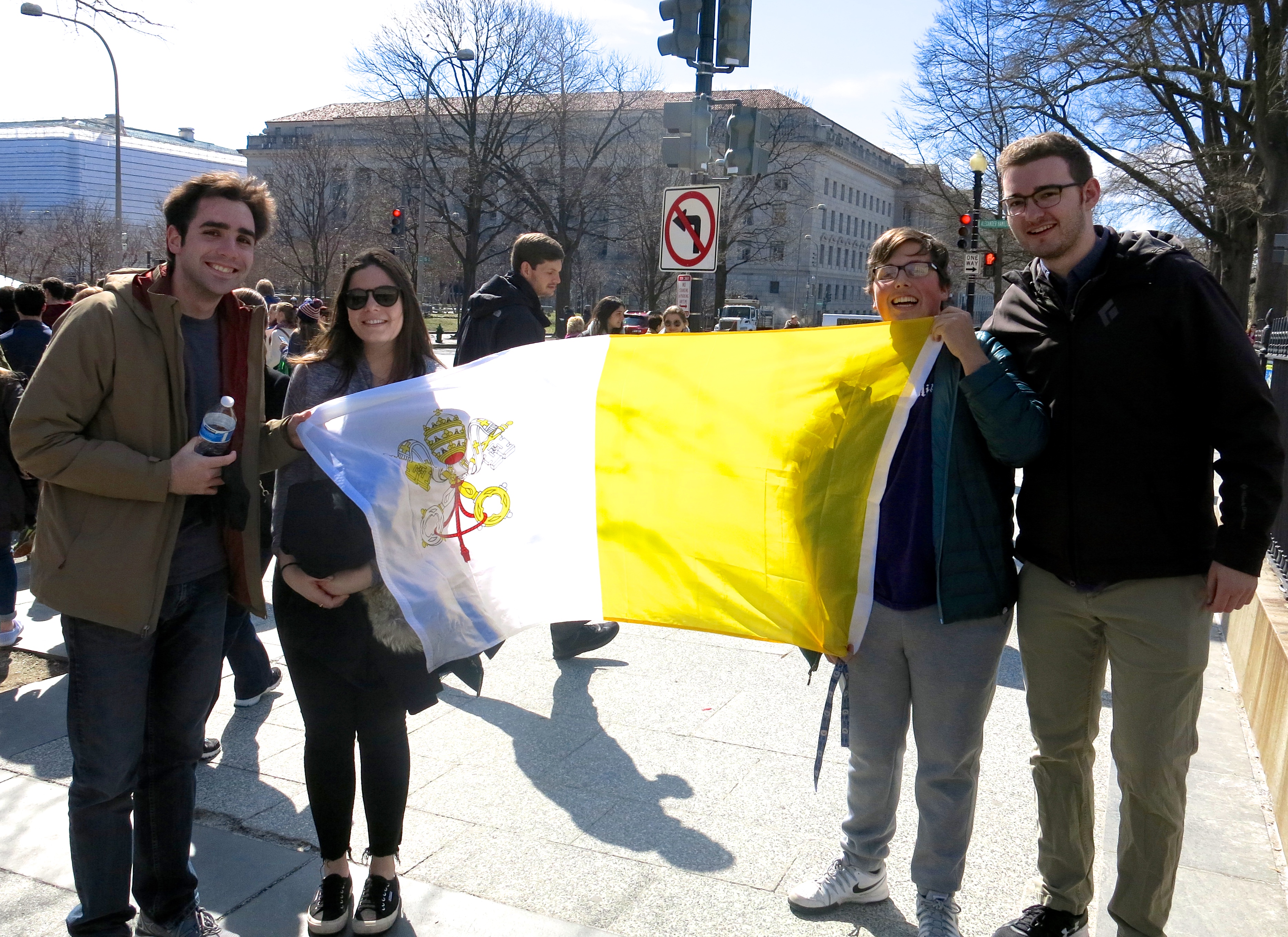 Bryant King (far left), Roman Catholic: Participating in the March for Our Lives with my interfaith brothers and sisters was a powerful experience. Following the example of Cardinal Cupich and other leaders in the American Church, I was driven to stand up with hundreds of thousands throughout our country calling for justice and the protection of the vulnerable. Faith is not a passive act and it was amazing to be in the presence of so many working for the common good. It’s my hope that people of faith will continue to bend Dr. King’s arc toward greater justice in our society (Amos 5:24). 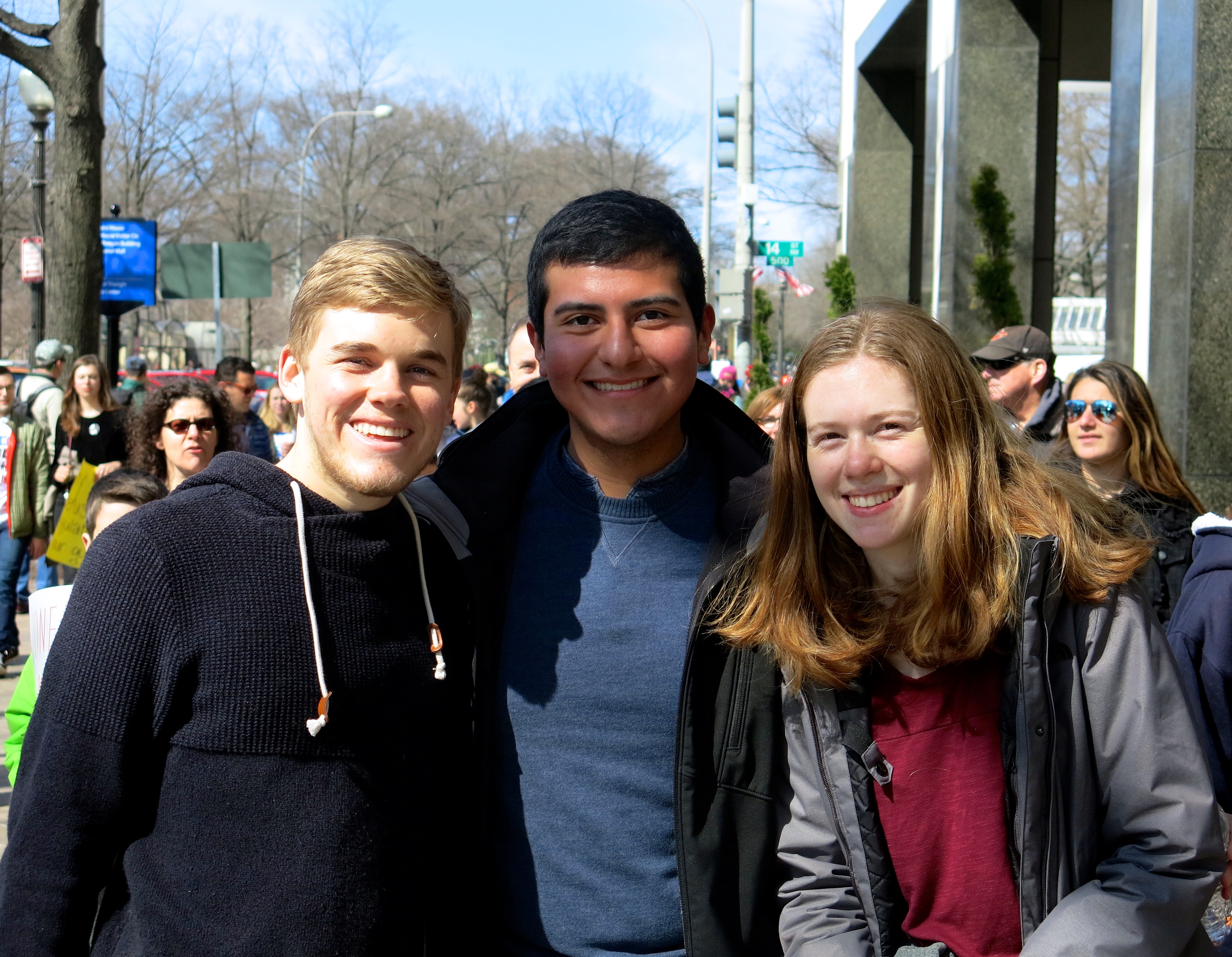 Adam Wagner (left), Protestant: For me, marching was about showing solidarity and support for a cause bigger than myself. Hearing from such inspirational youth leaders and being surrounded by such passionate people was uplifting. The march was important because it provided a space to manifest a collective movement; however, going forward, we must continue to press for change. Personally, this means approaching activism the same way I approach my faith: making it an integral part of me by reflecting, engaging in dialogue with others, and never ceasing in the battle for love and justice.

Zeke Gutierrez (center), Roman Catholic: I participated in the March for Our Lives on Saturday, March 24 with the goal of demonstrating my support and unity to the victims of gun violence. I feel this was an issue that affects multiple communities and the movement finally highlighted the need for gun reform. As a Catholic at Georgetown, the friends and members of the community I marched with understood the need for reform as an issue of greater social justice. Being part of the prayer in the morning helped set the tone of the march where I felt closer to my faith. 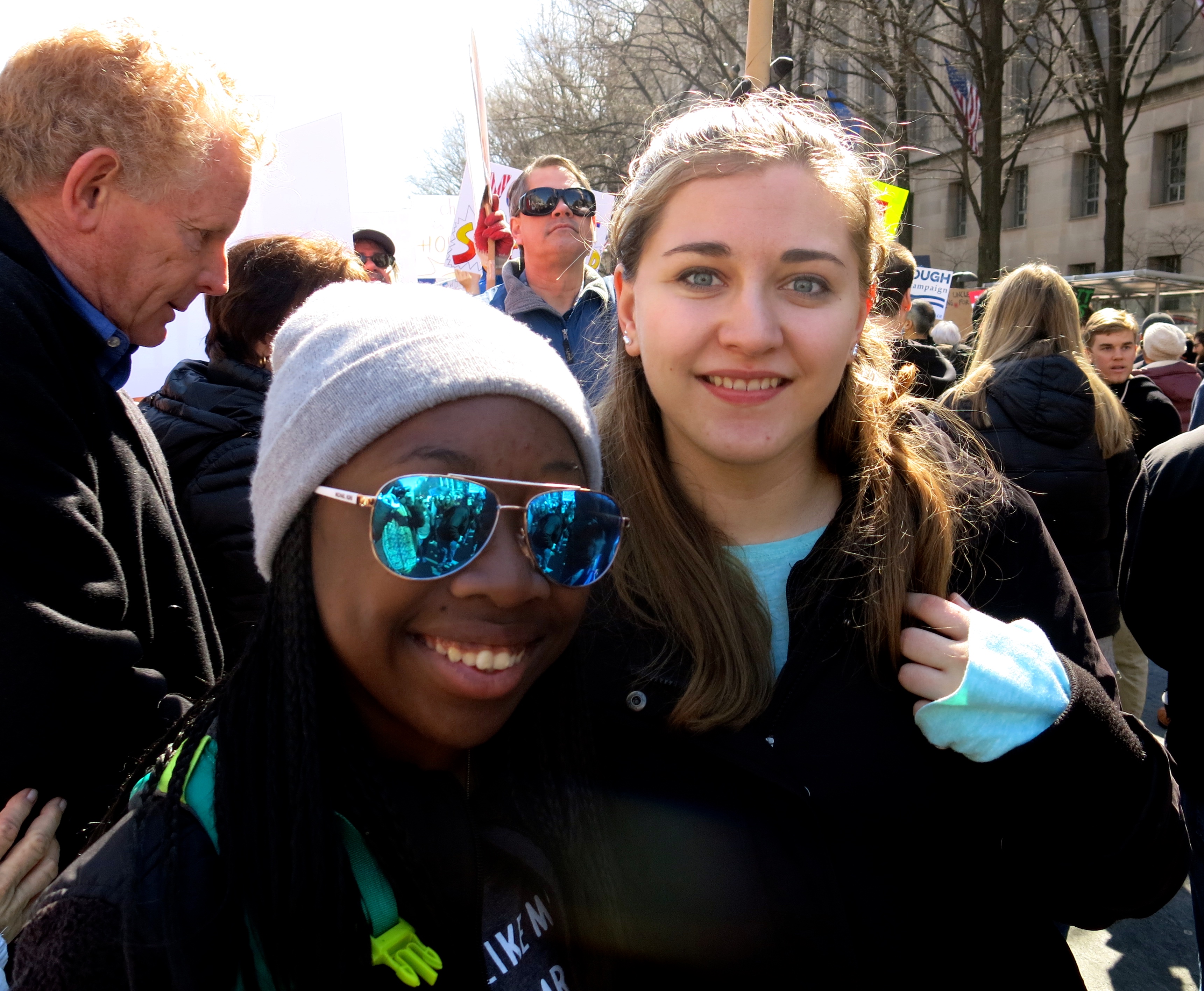 Brandi Coleman (left), Protestant: Words can not describe how emotional this day was. There was a moment during the march where I stopped and just reflected. I was absorbing just about everything and trying to harness my emotions. There are so many unexplainable events that occur in this world, but the one that occurred at Stoneman Douglas High School was not one of them. When our lawmakers finally realize gun control is not an issue they can slide under the rug this country will have a chance to prevent such acts of atrocity. As kids, we were always told we would change the world someday. I don’t think I could have ever imagined just how desperately the world, our home, needs us. We are the generation that has the power to change it all and I pray my generation can do so. I pray my children’s children are not fighting the same uphill battle we are now. Today was a lot of things: sad, frustrating, and unfortunate that it had to occur, but most importantly it was empowering. To dream big dreams was instilled in my generation. It’s now time to turn those dreams into a reality. After seeing what I saw today, standing in the midst of greatness, and being led by the powerful youth of my generation I’d say the future looks brighter. 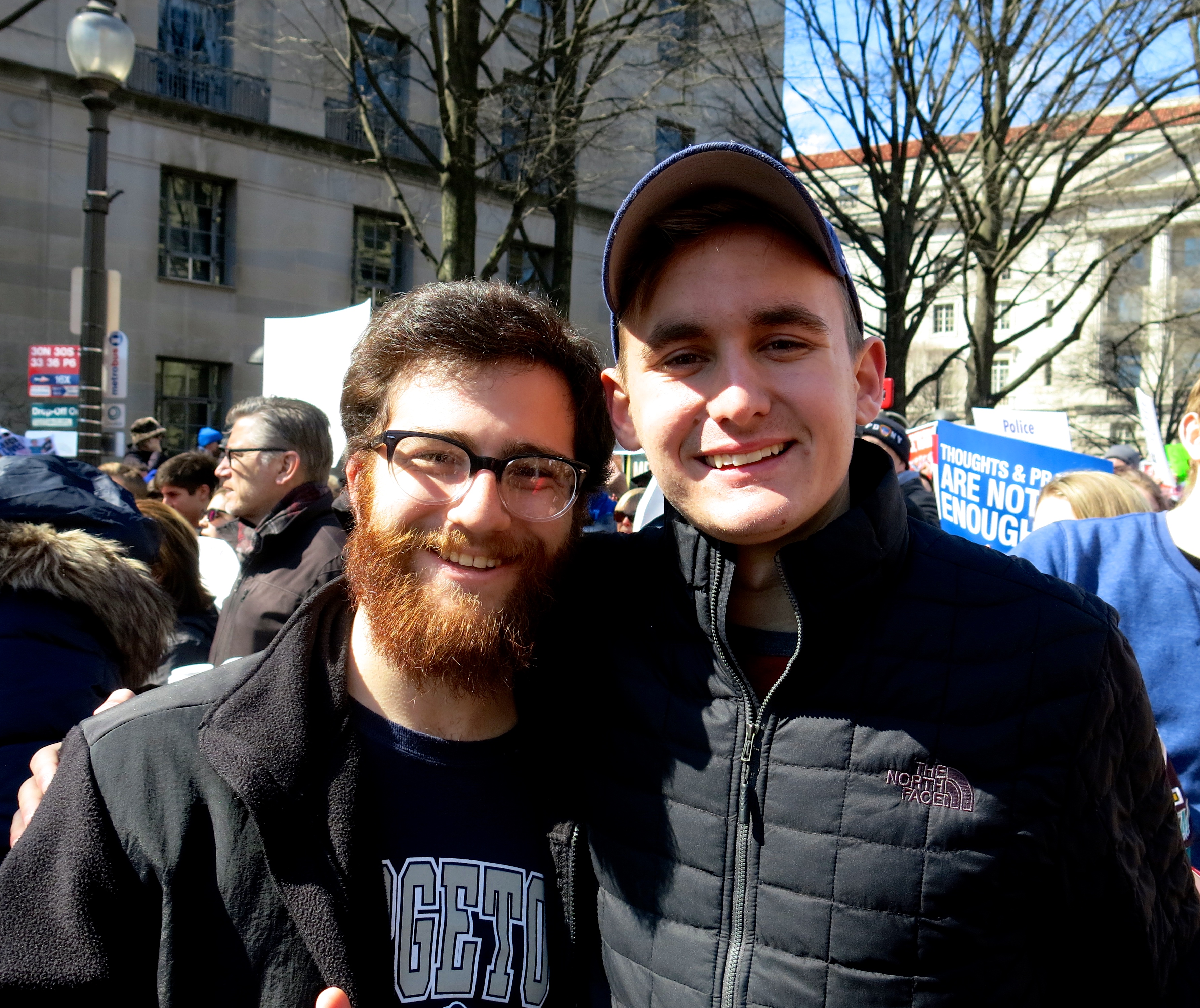 Max Tinter (left), Jewish: Walking down to the Capitol is always an inspiring event. One cannot help but feel the weight of the city, passing by the buildings in which American history has been written. As we drew closer to the sight of the rally, I became equally inspired by the sheer numbers of students traveling from across the country to advocate for a change they desired. Being surrounded by hundreds of thousands of people to watch exclusively young people deliver emotional speeches and personal anecdotes on the impact of gun violence made for a powerful afternoon. As it progressed, I began to realize something I think I will carry with me for a long time: it is not just the bureaucrats in the beautiful buildings that can change the world but also the work and mobilization of the masses. This a powerful cause that has affected countless individuals. Saturday only served to further my faith that efforts for change will not be in vain. 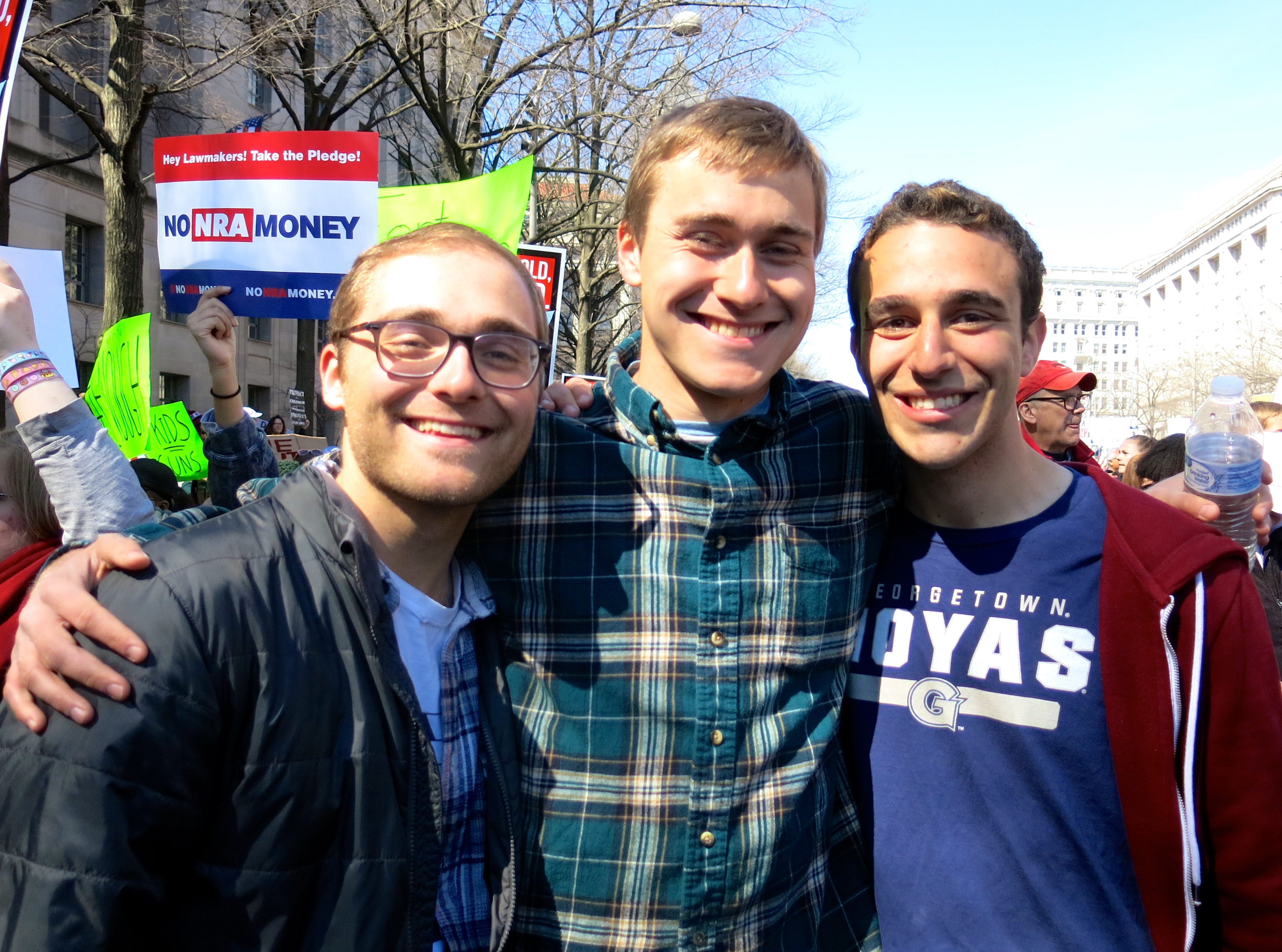 Sean Berman (left), Jewish: For me, the March for Our Lives revealed just how gruesomely mundane and common gun violence is in America. Mass shootings, such as the massacre at Parkland, stun the country, and the March successfully gave voice to several incredibly courageous students who spoke about their traumatic experiences. But the March organizers also illuminated numerous narratives of “everyday” gun violence that largely remain outside of the national discourse. To me, these stories show that our generation is presented with an even more systemic issue about guns than just eliminating AR-15s and high capacity magazines. When I decided to March with an interfaith group from Georgetown, I knew I was adding my voice to a diverse group of Hoyas – which is exactly what tackling gun violence requires. The March for Our Lives taught me that a pluralistic approach to combating this systemic evil in our society is the only way to make sure #neveragain becomes a reality for all Americans, regardless of race, socio-economic status, or ethnicity.
Eamon Coburn (center), Roman Catholic: The sign that has stuck most with me from the March said simply: “One child is worth more than all the guns in the world.” Coincidentally, our day began with the Jewish prayer “Whoever destroys a soul, it is considered as if they destroyed an entire world. And whoever saves a life, it is considered as if they saved an entire world.” (Mishnah Sanhedrin 4:5; Yerushalmi Talmud 4:9, Babylonian Talmud Sanhedrin 37a). I think that really sums up the day for me. One life is so much more important than any amount of materials, let alone guns. I don’t believe anyone could look the mother of a child who was shot and killed in the eye and tell her that any amount of guns are worth that one life. Because to her, that child is gone forever and to us, that world is destroyed. And no amount of guns can bring back that child and no amount of guns can revive that world. We need common-sense gun control because if even only one child lives who otherwise would have died, it will be worth it.
This entry was posted in Reflections and tagged Interfaith. Bookmark the permalink.