Set the World on Fire Every Day

Posted on October 19, 2017 by Office.of.Campus.Ministry [Organization] 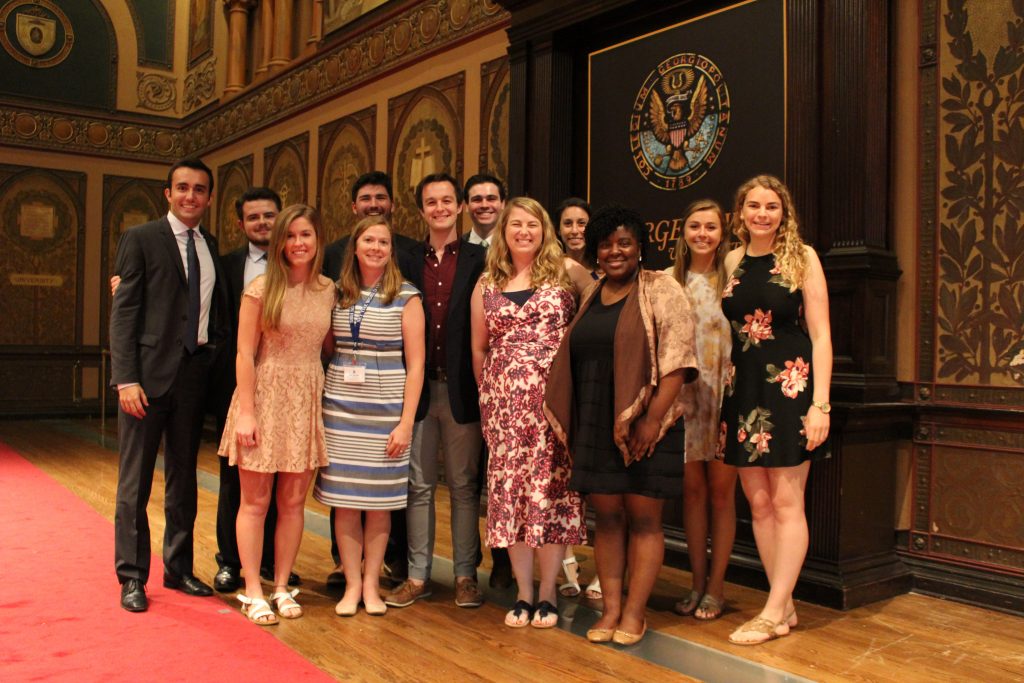 Clara Cecil (far right) with other members of the NJSLC Planning Committee.

Senior Clara Cecil, MSB’18, a student volunteer who helped plan the conference over the past year, reflects on her summer and the impact of planning a major conference.

Going into this summer, I was incredibly uncertain. While many of my classmates had completed finance and consulting industry recruiting in the early fall and knew exactly how they would spend their summers, my path was much less straightforward. By the time April arrived, I still had not decided where and how I would spend the summer. Nonetheless, through the support of my parents and the guidance of friends and professors, my summer ended up being more incredible than I could have ever imagined.

I started the summer by traveling with a friend in France, then I explored London and Copenhagen with my family. After returning to the United States, I researched food waste – a subject about which I am extremely passionate – through the McDonough School of Business Summer Undergraduate Research Fellows program. I also worked part-time as a Student Business Analyst for the Beeck Center for Social Impact and Innovation on campus. Although I initially doubted that I would have an impactful summer experience, I made unforgettable memories, developed new friendships, and learned about myself and the world.

Along with my other summer experiences, I worked on the planning committee for the National Jesuit Student Leadership Conference as the Logistics Co-Chair. My co-chair Aaron Bennett and I were responsible for reserving spaces, organizing transportation, planning meals and snack breaks, and ensuring that the conference ran smoothly from start to finish. Admittedly, it was difficult to coordinate the logistics for a conference with over 300 attendees, and it required extreme attention to detail. After working to plan the conference for more than a year, it was incredibly fulfilling to experience the conference alongside the attendees from Jesuit schools across the country and world.

What I didn’t expect from the conference, however, was to learn so much from the attendees. The theme for this year’s conference was “Set the World on Fire.” Going into the conference, I had a pretty good idea of how I hoped to set the world on fire with my future career. My business school classes strongly emphasize corporate social responsibility or the role of business in respecting social and environmental interests in conjunction with business goals, and I hope to be able to drive positive change in the world through business.

However, the conference taught me that setting the world on fire is not confined to a future career. From attending student-led workshops to talking to conference attendees, I experienced how students are already applying their Jesuit values in their immediate school communities and beyond in diverse ways. For example, I attended one workshop led by students from Le Moyne College (the hosts of next year’s conference) who are promoting diversity and inclusiveness on their campus through dance. Not only are the conference attendees making a difference in their immediate school communities, but they are also working in meaningful internships, starting nonprofits, and tackling the greatest challenges facing the world today. Before the conference, I had a limited conception of what it meant to set the world on fire. But the conference attendees inspired me to expand my thinking and to set the world on fire not only through my future career but also through the way I live my life every day.

Given my experiences this summer and throughout the past few years at Georgetown, I wish I had known to relax and trust in God that life would turn out better than I had ever expected. During my internship and job search processes over the past few years, I have spent so much time crying on the phone to my parents or worrying about the fact that I would not secure an internship. Now I understand that I should have spent that time setting the world on fire through my daily actions, knowing that I would end up exactly where I was supposed to be with the support of friends, family, and my other support systems at Georgetown.

This entry was posted in Reflections and tagged Catholic, jesuit. Bookmark the permalink.