Posted on October 6, 2016 by Office.of.Campus.Ministry [Organization] 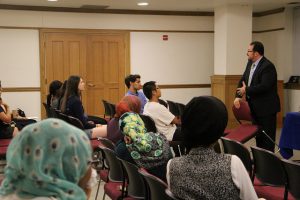 The “Fighting Stereotypes: Frequently Asked Questions about Islam” event was one of the most interesting events I have attended so far in Georgetown. Debunking stereotypes and asking tempting questions, the one hour of discussion provided a great insight for students to engage with Islam’s nature. I personally learned a lot about certain aspects of Islam including jihad which is a very misinterpreted concept in the religion.

Jihad is one the most controversial topics in Islam and therefore it was discussed early within the discussion. Imam Hendi explained the actual definition of jihad and the different forms of it. Contrary to popular belief, we discovered that in fact jihad is basically an internal goal which you attempt to achieve. These internal goals can be as small as doing good on a class test to achieving peace in the Middle East. This was a very surprising revelation to many students at the event as we commonly associate jihad with violence and war.

The most interesting part of the discussion 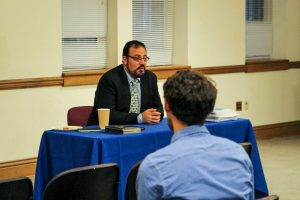 was on how Muslims can fight Islamophobia and present a better image of Islam abroad. Many Muslims including I, gave our personal accounts of certain incidents that we have experienced and gave our suggestions. There were constructive ideas about how the media can depict Muslims’ ordinary lives from different social classes in order to demonstrate how Muslims are like any other society in the United States or elsewhere.

This discussion reminded me of an experience I had before when a friend told me: “Wasil, I can’t explain it but you’re a different type of Muslim”. Before knowing me, my friend had a certain, probably negative, portrayal of Muslims based on mainstream media. However, once he got to meet and be friends with a Muslim first-hand, his image of Muslims changed forever. I think that’s an example of how Muslims can challenge Islamophobia—by being good representatives of their religion and integrating with the rest of society. 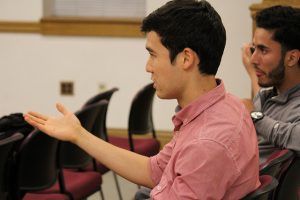 Other topics were discussed as well including the general diversity of the Muslim world. Muslims don’t only have a wealth of different known sects (Sunni, Shia, Sufi etc.) but also a wide range of traditions and cultures. Holidays like Ramadan are celebrated in distinctive ways from praying to having festive parties. We also discussed how different societies in Islam have different dress codes and how for some women the hijab is more of a cultural tradition and for others it’s a religious command. Muslim students in the event shared their common practices and the range of responses was exhilarating. This immense diversity struck many students including myself as we learned about unheard traditions across the Muslim world.

Overall, this event enlightened the minds of all of us, Muslims and non-Muslims. The discussion brought us to a n ew understanding of Islam and whether common conceptions of the religion are true or not. It was a pronounced opportunity to both learn and reflect on how we view each other and our societies.

This entry was posted in Programs and tagged Interfaith, Muslim. Bookmark the permalink.