Posted on September 26, 2016 by Office.of.Campus.Ministry [Organization]

Before a backdrop of lightning-streaked skies darkening over the Appalachian Mountains, six student leaders sat in front of the 1Ls gathered at Georgetown’s Calcagnini Contemplative Center and shared their sacred stories. Twenty-three students listened to accounts of the fullness of life, the struggle and resilience, with faith and hope lost, and found. Several exchanged incredulous glances when the stories turned deeply personal, as though wary to trust such vulnerability from strangers. But as the narratives continued, the students began to accept the candidness offered, and their faces reflected the solemnness and respect that the sharing of such confidences invites. The final leader shared her story, then gave the students their task for the weekend: reflecting upon their own “sacred stories,” the narratives that chronicled their accomplishments and failures, acknowledged their experiences and development, and exposed their hopes and fears. 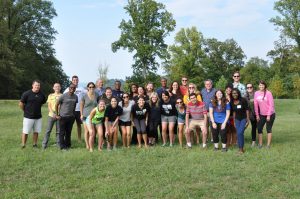 Vulnerability is a remarkable catalyst for intimacy. But vulnerability, especially for those who have battled their way into a top law school, can often be mistaken for weakness; if you are vulnerable, you can be exploited, and in a law school environment that too often feels like a competition in which every classmate is a rival for a top grade or a coveted job, vulnerability can leave you open to attack. Law students are taught how to succeed, but we are less educated on how to acknowledge and accept those parts of ourselves which society has taught us to hide. Certain feelings and situations still have stigmas attached. We are directed during orientation week to resources to that will help to “solve” our problems, but we are not told that having those problems makes us no less capable, successful, or human. We crave reciprocation- we want to know that our vulnerabilities will not fall upon ears of stone. Hearing others share their stories first creates an atmosphere of intimacy and safety, in which we recognize that our own experiences will not be disparaged. The 1L retreat was arranged exactly in such a way: by sharing their own vulnerabilities first, the retreat leaders allowed the students to contribute their own vulnerabilities to an ether already saturated with those of others, eliminating the difficulty of being the first to be candid.

Just twenty-four hours after stepping off the bus, the students piled back on, prepared to return to “the real world.” Arriving back on campus, I bade the retreatants farewell and headed for the metro. As I sat down, one of the retreatants joined me. She thanked me for sharing my sacred story on the retreat and told me my frankness about my experiences made her feel that her own fears were valid. She then shared some of her worries with me, and I was able to assuage some of them, as I had experienced all of them during my 1L year and had acquired some coping mechanisms I could share. After a while, she sighed deeply, as though releasing a great burden. “Thank you. You’re making me feel better even after the retreat has ended,” she said. “But the retreat hasn’t ended,” I responded.

The retreat affected not only the 1Ls who attended: through it, I found that my self-termed “weaknesses” not only make me stronger, but can also be a source of strength for others. Through my sacred story others learned, perhaps for the first time, that their own stories are legitimate purely because they are theirs. I am hopeful that the students who spent that weekend in the mountains will retain that knowledge as they recall, affirm, and build upon their own sacred stories.

This entry was posted in Reflections and tagged Law, Retreats. Bookmark the permalink.