Posted on August 8, 2016 by Office.of.Campus.Ministry [Organization] 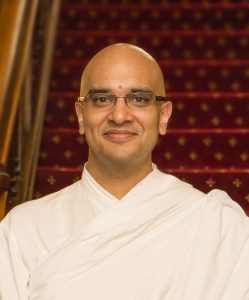 I am pleased to announce the appointment of Brahmachari Vrajvihari Sharan as Georgetown’s first full-time Director for Hindu Life and the first Hindu priest chaplain in the United States. Br. Sharan joins us from the University of Edinburgh where he served as Honorary Hindu Chaplain since 2010.

Br. Sharan is a Senior Monk at Shri Golok Dham Ashram (Vrindavan and New Delhi) where he was initiated in 2003. He subsequently completed ritual training at the Vishwanath Sannyas Ashram in both Varanasi and Delhi. He is an Āchārya, a qualified trainer of Hindu priests (Pandits), who advises more than twenty temples worldwide.

Since completing his Ph.D. in Sanskrit at Edinburgh in 2015, Br. Sharan has also served as Lecturer of Asian Religions at Cardiff University in Wales and Senior Teaching Fellow in Sanskrit at the University of London in England. Br. Sharan has been a major contributor to interfaith initiatives across the U.K. and is a Patron of the Hindu Forum of Europe.

Br. Sharan was drawn to Georgetown by its commitment to interreligious student formation, and by the vibrancy of the university’s Hindu community. From its foundation in 1789, Georgetown, the nation’s oldest Catholic and Jesuit university, has been open to students of every religious tradition. The Second Vatican Council (1962-65) deepened the Catholic Church’s commitment to vibrant and substantive interreligious engagement, and inspired Georgetown to develop what is now the largest interreligious campus ministry in the country.

We are deeply consoled that Br. Sharan has accepted our invitation to join the Campus Ministry team in ministering to students, faculty and staff of all religious and spiritual traditions. He will also serve as chaplain-in-residence to first-year students in New South. Br. Sharan’s office is 114 Healy Hall. Please stop by and introduce yourself.

Let us continue to thank God that ours is a community dedicated to the justice, peace, and love that moves us all.

This entry was posted in News and tagged Hindu, Interfaith. Bookmark the permalink.