Overcoming Evil: Thoughts on San Bernardino from a GU Alum

Posted on December 17, 2015 by Office.of.Campus.Ministry [Organization]

Brian St. Clair (SFS’06) was one of the original student leaders at Georgetown’s establishment of the John Main Center. He and I used to sneak into Copley Crypt late at night to meditate with fellow Hoyas before there was an official meditation space.  We were rebels.

Brian now lives in San Bernardino.  He has submitted this statement regarding the tragedy of last week: 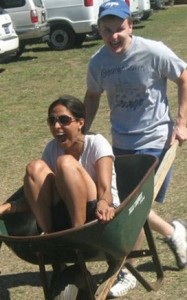 I’ve heard the phrase “too close to home” more in the last few days than I pray I ever will again. My wife and I live in Redlands, CA. She works at a nonprofit in San Bernardino down the street from the center where the recent mass shooting took place. I work in Redlands near the neighborhood where the shooters’ apartment stocked with weaponry was discovered. The shooting rocked our community, our sense of safety, and our sense of being at home. The fact that it may in part have been designed to do just that makes it worse. The fact that the killers are dead gives us no solace. Only our friends, family, coworkers, neighbors, and love for one another can provide that.

The person and the place you call home is determined most by bonds of love and generosity. Much less by the things we oppose, and even less still by what we hate. And hate we sometimes will – because the hateful and the repulsive will always be with us. But our hatred doesn’t define us; it doesn’t make us powerful. Only our love can do that. It’s not just what makes us feel safe and at home. It’s the only thing that ever has.

When watching the news release the names of the shooters, our hearts sank. We feared the killers might be identified as Muslims and that this might bring a fresh wave of inhumane hatred with their act of inhumanity. It’s a double crime to betray your community with horrific violence and at the same time corrupt the names of good and peaceful religious people who are among the creative citizens who call America their home. Such an act does violence to truth as well as to flesh and blood.

We have personal as well as social reasons to fear. My wife is Muslim and I am Catholic. We met 8 years ago and got married for the first time nearly two years ago. I say “for the first time” because we were married three times to each other – once civilly (and within 90 days of legal entry) in accordance with American law, once in accordance with Islam, and once in accordance with the Catholic Church. We’ve made an art of reconciling requirements, statutes, and limitations, and turning them into a beautiful journey we can share together on our way to creating a life of joy and family and service to others.

Is ours a story of immigration, of interfaith union, of overcoming odds and obstacles? Maybe it is, but that’s not how we see it. To us, ours is a love story like any other. Have we encountered bigotry and unintentional insult? Yes. Do we live in a safe world? Sometimes it is and sometimes it’s not. Do we live in a world that supports our most glorious aspirations or one that’s hostile to our deeply held dreams? Both. What about the country we call home? It often lives up to its reputation and sometimes it falls short. Does any of this paralyze us? Almost never.

And neither will the mass shooting here in San Bernardino. The day after the shooting, people lined up at Aadila’s workplace, a local blood bank down the street from the building where the shooting happened, to donate blood for the victims. We’re a people that literally bleed for each other when one of us is in trouble. That’s a beautiful thing and something that greatly pleases the God who made us, no matter by what name we address Her or by what prophet He speaks to us.

Much will be said about things we should do to make it more difficult for people to commit acts of mass murder like the one that happened here. We should talk about those things and we should do more to prevent these acts. But we should also do more to foster communities of hospitality, respect, and resilience. We should do more to be a haven for refugees, immigrants, and the poor. We should do more to live up to our highest ideals and not lower our standards in the interests of  self-interest and self-protection. In the end, that doesn’t make us safer – only smaller.

Many and specific will be the calls to respond. And if we must respond to extremism in the extreme, let it be thus: to extend friendship with those different from us, to welcome the stranger from foreign lands, to give when we haven’t enough ourselves, to learn more about the people we find most difficult to understand, to serve one another when it makes us most uncomfortable, and to forgive when we would rather take vengeance. At this time, I’m reminded of the words of a Jesuit priest who spoke at mass on the day of my Georgetown graduation. While I don’t remember his name, his words I’ll never forget. He said, “The quality of your life will be determined by the quality of your loving.” No words I’ve heard feel truer to me now than these.

In the final analysis, it isn’t so much a matter of avoiding or preventing evil in this world. Evil will never be wholly overcome short of the next life. Rather, we must overcome our own impulse to despair – what Kierkegaard called the “sickness unto death” – and give over as much of ourselves to love and serving the Good as there remains in us to be offered. This is the holy sacrifice. This is the spotless victory.  -Brian St. Clair

Brian represents the best of our program and we look forward to supporting his vision for a more loving world.