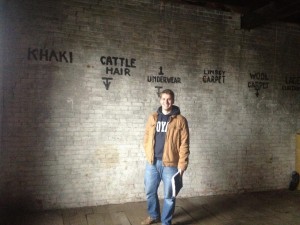 ^Me exploring a former industrial space in Utica.

1. Is Life in Utica Really This Bad? “The Worst Snow Globe. Life in the City That God Forgot”

This is a blog post by someone clearly dissatisfied with his time spent living in Utica. This quote encapsulates the sentiments you’ll find at the below link:

“I feel like some of the mental damage the Utica area has done to us is slowly starting to heal. You know how some buildings are called ‘sick buildings’ because the people who live and work in them are ill all the time. Utica is a sick town but the illness is all mental, (ok and some physical. Want to see webbed toes and gout? Price Chopper on Genesee street. Just sayin.).”

This highlights the city of feeling. Clearly this blogger sense that Utica is an abyss of sorts, a place devoid of excitement and opportunity. However, this blogger’s experience might be a reflection if not and indictment of Utica’s insular character. The blogger notes that the area has an “Appalachian style suspicion of the outsider.” Considering I am pretty much an insider, it’s difficult for me to dispute this belief. The way one looks at a city reflects the personal relationship–or lack thereof–one has with said city.

De-industrialization  took its toll on Utica for decades. Tens of thousands of people left the area in search of a better job, a better future, and better weather. A recent influx of refugees, however, has brought hope to the region. This podcast tells that story: http://stateofthereunion.com/utica-ny-city-with-a-warm-heart/

Cities are not stagnant, nor are their populations. As Lehan notes, the city is now a labyrinth and I think Utica is no different–it is a wonderful multicultural mash-up nestled just outside the Adirondacks.

Be sure to read this New York Times article about the (potential) return of manufacturing to Utica! As I’ve mentioned in other parts of this blog, Utica is a turning point and nano-manufacturing is at the heart of it. Jobs are coming to the area, and with these jobs will come people and a renewed sense of purpose. The pervasive sense of hopelessness that you see in rust belt cities (watch Detropia  if you want proof from Detroit) might soon be leaving the region. It will take, as someone who I interviewed recently mentioned, “people getting on the cool train” and realizing the promise Utica holds.

4. Can you pronounce these words? Like any city, Utica has its own vernacular. Brooklyn has fuhgeddaboudit, Boston has wicked, and Utica has Chanatry’s. Each city has its own language, and to make it in Utica–to be an insider–you need to know how to pronounce the names of its pizza places. Perhaps this is something that contributed to the alienation of the blogger (see point 1), and indicates that it is difficult to fit into a city (even one as small as Utica).

To fully understand this commercial you need to contextualize it. At this point in time, Utica is suffering from decades of population and job loss, and the refugees that eventually stop this population decline have not yet arrived. This video is a plea, made evident around the 0:20 mark: “Without you living here, it wouldn’t be the same.” In Seeing Calvino we see fantastical cities. Utica in the 1980s was at risk of becoming something fantastical itself–a city without people.

I include this video for those of you who might not be too familiar with Utica! There really is a lot to do in the city, and in hindsight I wish I had made more of the city when I was in high school. Granted I was too young to fully enjoy Varick Street’s allures, but I rarely went to the Stanley, the Aud, or the Zoo. Utica is no New York City in terms of things to do, but it does its best and I really should have made more of it when I lived in the area.

When The Office mentioned that Dunder Mifflin had a branch in Utica (and that main characters were actually going there) the area was abuzz with excitement. I remember talking about it in my house, with my friends in the hallway, and seeing it in the news. This seemingly innocuous moment in a TV show was big for Utica.

Side note: Paul Liberstein, who played Toby in The Office and was a writer for the show, is a Hamilton College grad. In case you did not know, Hamilton College is in Clinton (my hometown that’s just five minutes from the city) so you can now tell why Utica got a branch of Dunder Mifflin Paper Company!

The Utica Comets are the city’s AHL team. The Utica Auditorium is frequently packed for their games, and the blue and green can be seen across the city throughout the winter. What’s fascinating about the Utica Comets is how the name harkens back to a local team lost to history–the Clinton Comets. The Clinton Comets were a professional team based out of my beloved home town. In regards to my project, this acknowledgement of a past hockey team is the same sort of memory at play with warehouses. Hockey today in the area is re-inventing the hockey of the past, just as developers are re-imagining how the industrial spaces of the past can be utilized.