The Library’s Gelardin New Media Center will open an experimental pop-up makerspace on the 1st floor of Lauinger Library in January 2016 and we need you to tell us what should go in it. Would you use a laser cutter, a sewing machine or a robotics kit? Would you want help learning how to use these tools? Let us know!

What is a makerspace? A makerspace is a physical location that provides access to specialized tools, like 3D printers, laser cutters and fabrication supplies. A makerspace fosters innovation and creativity by providing a space for inventors and creative teams to gather and share resources and knowledge. Students can design and realize creative projects while networking with others and learning new skills. As centers of research, innovation and discovery, more and more libraries are offering makerspaces for technological experimentation and idea prototyping.

Help us plan our makerspace!

As we make plans for the new pop-up makerspace in Lauinger, we need your advice. If you’d like to make artwork, experiment with electronics, or have hands-on access to emerging technologies, we want to hear from you. Tell us about your ideas for a new invention or design you’d like to prototype. Take the one-minute questionnaire below to let us know what tools and resources you need to bring out your inner Edison or Picasso. Wednesday, November 11th George Washington University will host an artist’s lecture by Shahzia Sikander, a contemporary Pakistani visual artist based out of New York. She will discuss her artistic practice, current and past works, and offer her insight into the contemporary art world.

The lecture will be held on GWU’s campus in the Smith Hall of Art, Room 114, at 6:15pm. Following will be a reception with Shahzia Sikander in Gallery 102 (Smith Hall). This is a great chance to converse with a practicing artist and hear her take on the professional art world.

Sikander specializes in Indian and Persian miniature painting, blending this traditional genre with animation, video, and mural work to create a distinct, re-imagined artform. Sikander earned her MFA from the Rhode Island School of Design (1996) and is the recipient of a MacArthur Genius Award (2006-2011). Read more about Sikander’s amazing work and see interviews with her on Art21. Katrina@10 is a national symposium at Georgetown University on October 22nd and 23rd, 2015 that examines the impacts of Katrina and the flooding of New Orleans on memory, culture, history, media, policy and social justice.

A decade ago, in late August 2005, for several hundred thousand Americans, Hurricane Katrina presented a problem of survival. For those who remained in New Orleans, climbing onto roofs in Chalmette or into attics in the Ninth Ward, Katrina was life threatening and world changing. On Monday, August 29, 2005, at 6:10 a.m., Hurricane Katrina made landfall at Buras, Louisiana.  The federally-constructed levee system began to fail as early as 4:30 a.m. By mid-morning, much of the City of New Orleans was under water. All told, 80% of New Orleans was flooded and 1,056 people died.

For everyone else, Katrina was experienced as a media event marked by a surplus of images and a paucity of experience. Ten-years later, Katrina presents a problem for memory and for understanding. In the case of Katrina, whatever has imprinted deeply has been shaped more by television news coverage than by direct experience. A global audience experienced Katrina as a flood of images, and those images have defined collective memory over the last decade. If Katrina is to be understood, we must interrogate the production of our own collective memories. Katrina@10 will examine the impacts of Katrina and the flooding of New Orleans on memory, culture, history, media, policy and social justice. All events are free and open to the public, RSVP here.

The Library is  commemorating Open Access Week (October 19-25, 2015) with a screening of the documentary, The Internet’s Own Boy: The Story of Aaron Swartz.

The Internet’s Own Boy follows the story of programming prodigy and information activist Aaron Swartz, a co-founder of Reddit. Swartz was arrested in 2011 for setting up a computer at MIT to systematically download articles from JSTOR. He was indicted for wire fraud and computer fraud, among other charges, leading to a two-year legal battle with federal prosecutors. His fight ended when he committed suicide in January 2013, at the age of 26.

The film screening will be followed by a facilitated discussion of Swartz’s actions, the questions he raised about freedom of information and his support for Open Access, which he espoused both personally and professionally. Join us for this important look at information freedom.

To learn more about Open Access Week, see this site.

Georgetown University Library Associates in collaboration with the Embassy of Australia and the Center for Australian, New Zealand & Pacific Studies Jörg Schmeisser: Prints and Passages features many of the German-born Australian printmaker’s most significant earlier prints and an array of his best works from 1998-2012, including substantial loans from local private collections. The exhibition is in the Fairchild Gallery in Lauinger Library through November 29, 2015.

Early in his career, Schmeisser (1942-2012) traveled widely through Europe, Asia, the Middle East, America and Antarctica. His etchings from this period demonstrate his fascination with cities in Europe and Asia that he visited, often featuring diaries of his thoughts and travels during the period of a print’s gestation. The ‘diary print’ is one of Schmeisser’s most important innovations and is a significant element in some of his best works, several of which are included in the exhibition.

In 1978 Schmeisser moved to Australia to become the Head of the Printmaking Workshop of the Australian National University, Canberra School of Art, where he was considered to be one of Australia’s most important and influential printmakers. He was a master of the etching medium and a talented teacher who made extraordinary contributions to the art of intaglio printmaking.

An exhibition of Schmeisser’s prints was featured in the Fairchild Gallery’s inaugural year in 1997. It is most fitting to pay tribute to the late artist in this inaugural year of the new gallery in the Booth Family Center for Special Collections.

As in 1997, the exhibition is curated by guest curator Eric Denker, Senior Lecturer at the National Gallery of Art. Denker first met Schmeisser in March 1981, starting a close friendship of more than thirty years. Denker has curated numerous exhibitions of the artist’s prints, including shows at the Scuola Internazionale di Grafica in Venice, the Corcoran Gallery of Art, the Australian Embassy in Washington, and the 1997 retrospective exhibition at Georgetown University. The current exhibition is in memory of a great friend and remarkable artist, Jörg Schmeisser.

The Center for Australian, New Zealand and Pacific Studies is part of the School of Foreign Service at Georgetown University. The Center offers a program of courses about Australia, New Zealand and the Pacific and has an extensive outreach program of lectures, conferences and meetings each semester. Learn more at canzps.georgetown.edu.

The librarian is in!  Have a question about your finding sources for your assignment? How to use Artstor? How to find new TV shows in the library catalog? Stop by! No question too small. What’s in a Search Bar?

The library page search bar has recently changed, offering more one-click research options. More isn’t necessarily better though! Each of these options offer specific tools for your research needs–and some work better than others. Here’s a key explaining the basics. Questions? Chat with a librarian or stop by the reference desk next time you’re in Lau. Knowing how these tools work can really improve your research (and save you time). Here’s a pdf for printing. Art History Professor Keren Hammerschlag will be giving a public lecture this Friday on The Jewish Race in Victorian History Painting. This is a fantastic opportunity to observe a professional art historian in her milieu and learn about a new topic.

Professor Hammerschlag’s lecture is presented as part of The Program for Jewish Civilization (PJC). This public lecture series highlights the incredible faculty that GU students interact with across disciplines within the PJC and the University. Professor Keren Hammerschlag is a Postdoctoral Research Assistant Professor in Art History at Georgetown and is a Faculty Affiliate in Residence at the Kennedy Institute of Ethics.
September 25 at 12 PM
in ICC 450
The Jewish Race
in Victorian History Painting
Keren Hammerschlag
Post Doctoral Research Assistant Professor
Department of Art History, Georgetown University

RSVP is requested. A light lunch will be served at the event.

After shots were reportedly fired today at Union Station during the lunch hour rush Ursula Lauriston (@urdiggy) posted this tweet: Although the two men running in this photo could be sprinting for a bus, in the context of a shooting the image takes on more gravitas. The situation doesn’t seem to be too severe–Grasswire reports only a single shot was fired by a security office in response to a potential stabbing, but at a major transit hub in the nation’s capital this results in an evacuation, lockdown, and thorough police presence, from multiple ambulances to helicopters. Ursula Lauriston caught this picture of the action presumably during the evacuation, and media outlets quickly responded. Notice that they all offer to cite her. From the standpoint of copyright, you’ve got to credit your sources, which CNN, NBC, HuffPost, New York Daily News and others demonstrate here. Stay safe everybody!

Posted in Image Use (and abuse) | Tagged copyright | Leave a comment

The gallery season at Spagnuolo kicks off tonight with a talk by digital artist Tim Portlock. Portlock’s current work combines special-effects software, 3D gaming technology, and the visual conventions of 19th-century American image making to simulate decaying cityscapes. The large-format images in his exhibition are inspired by the city of San Bernardino, California, which recently filed for bankruptcy. He is currently an Associate Professor in the Film and Media Department at Hunter College, CUNY where he teaches courses in emerging media. 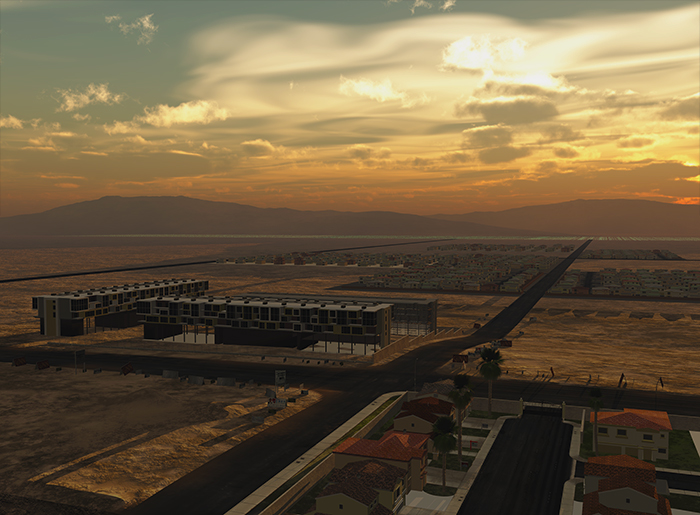 Spagnuolo’s second show features Susana Raab from October 21 – December 6 (Artist’s Talk & Reception October 29, 5:00pm). Raab was born in Lima, Peru and raised throughout the United States. She is a fine-art and documentary photographer working in Washington, DC, creating personal work in addition to working as the photographer of the Smithsonian Anacostia Community Museum. The work in this exhibition is from her series The Invisible Wall, which examines disparities of race and class in Washington east of the Anacostia River.