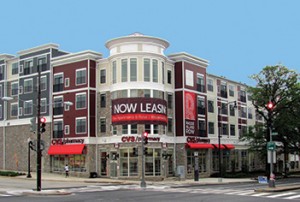 For my Community Based Learning course this semester, we had to do a bus tour of the neighborhood school I was in. The best point of reference for the neighborhood would be the Metro stop designation. The area surrounding the Rhode Island Avenue Metro stop is a perfect microcosm of the state of the District of Columbia. Directly outside the metro station are newly built luxury apartments that display the signs: now leasing. If we are to follow the citywide trend, in all likely hood, these apartments will be occupied by residents that do not depict the former population. The back side of the metro station connects to a bridge which leads to a paved jogging trail. However, a few blocks removed from the metro station on either side, the former Rhode Island Avenue area shows itself. Unlike the new pristine sidewalks of “Rhode Island Row” and its retail stores, the area outside the metro station contained the hallmarks of an under-served area of town: cracked sidewalks, older row houses–some in worse conditions than others–apartments, and an increase in liquor stores.

Furthermore, the Rhode Island Row area of the neighborhood seemed to be appealing to more upper-class residents. Evident in the new shopping plaza being built, although the neighborhood already has a shopping plaza. The difference is that the new plaza being built contains retail stores and services such as Home Depot, Bank of America, Giant, Chipotle and so forth. The existing shopping plaza is composed of a Forman Mills, Big Lots, Rent-A-Center, and fast food restaurants like Popeye’s and Subway. The contrast makes it hard to hide what is really happening at Rhode Island avenue–gentrification. Even with the pristine buildings and centers, the racial composition of the neighborhood does not appear to have changed, overwhelmingly, the neighborhood appears black. It would be interesting to see how the Rhode Island’s racial composition changes over the years.

Also, the neighborhood is in the vicinity of two universities: Trinity Washington University not far off from the Metro station and Catholic University’s basilica is visible from certain points of the neighborhood. I find this very interesting because many universities in the District are either located in affluent neighborhoods, or correspond with affluent areas of the city. There is probably a wealth of research on this, but how do universities influence their immediate neighborhoods? Do most resemble Georgetown, in which they gradually push out native residents? Or are there ways to establish symbiotic relationships between the institution and the neighborhood?

My final observation of the area actually comes from my observation inside a school within the area. Inspired Teaching Academy Charter School does not mirror the immediate neighborhood, it is a school that resembles the goals of the civil rights more than most schools in DC. The school is composed of nearly half white students and half black students, as well as teaching students from varied socioeconomic backgrounds. Like all neighborhoods, and cities, Rhode Island Avenue is changing and the million dollar question for all transforming neighborhoods is how can the new incorporated with the old in a symbiotic way? 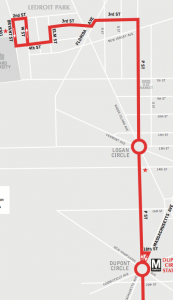 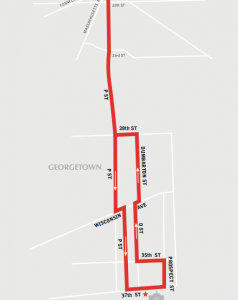 For my second exploratory piece, I took the G2 metro bus from Georgetown University to Howard University.  As I was on the bus, I separated what I saw into several categories: the people outside, the buildings outside, the change between different neighborhoods, and finally, the people who got on the bus. While on the bus, I realized that there were some things I was looking for during the trip (such as gentrification, and demographic change), and these notions in all likelihood influenced my thoughts on what I saw, and perhaps prevented me from seeing other things. Writing this, I understand that some of my observations may not do the places I describe justice, but like all assumptions, there is factual information that gave rise to the notions that guided my observations.

From my prior knowledge of the DC area, I expected as the G2 bus went further away from Georgetown and Dupont Circle, the surrounding neighborhoods would get progressively worse. But this was not the case, though there were obvious changes–unkept lawns, buildings with paint chipping off, a few unmaintained street–there was not a drastic change in the topography. One prediction that did come true, though, was that there was a change in the racial composition of the neighborhoods. As the bus went away from Georgetown, Dupont, and Logan Circle, the streets were filled with many more people of color. Also, as the G2 moved towards Howard, there were less young professionals on the street and more school-aged students as well as college students. This change, I think, can show the city’s priorities. Although economic activity stops after Logan Circle, it is evident that the city has plans for the area leading up to Howard. There are new buildings being constructed that will house some national retail stores. Overall, however, their was not any visible drastic change between neighborhoods. Reflecting on this, it is possible that I didn’t see any change in the neighborhoods because they have already been gentrified to look like each other. So the occurrence of the small differences I saw may be parts of the old neighborhoods showing that something was there prior to what I was seeing.

In relation to the class material, as I was observing the people on the bus, I realized that most people were on their phones and rarely paid attention to the scenery outside the windows. Perhaps the scenery was already familiar to the passengers and consequently became uninteresting. A question that this raises for me is what happens after a person becomes used to city life? Does the representation of the city suffer? Or is the uniqueness of the city renewed every day by newcomers?

Using Dinaw Mengetsu’s book The Beautiful Things that Heaven Bears as a guide to the neighborhood tour from Logan Circle to Dupont Circle served as a great background to the context of the neighborhoods. As a student whose hometown is not in DC, it is very difficult for me to understand the history of the neighborhoods and their relationship to each other. Mengetsu and his book provide at least some recent history about Logan Circle and the surrounding areas. Seeing how Mengetsu noted the changes in his neighborhood–from urine tainted benches to new black benches under a towering bronze statue–in the 1990s, and seeing  those fixtures in the present day really put the gravity of gentrification in perspective. Seeing buildings that were once dilapidated and poorly maintained now turned into million dollar condominiums left me asking how can a city knowingly allow these changes to occur unfettered?

The problem with gentrification is that despite the economic vitality it provides to a neighborhood or city, it never addresses the population that was their prior. As such, neighborhoods perform complete turnovers in terms of demographic, going from one extreme to the other–in this case, from destitute poverty to booming economy. Furthermore, with gentrification, although it attempts to erase the previous layer, it does not hide everything. The homelessness from Logan Circle to Dupont Circle was still there. In fact, I think that seeing a few homeless people in the span of those few blocks even holds more importance than in Mengetsu’s days. During his time, there was nothing anyone in the neighborhood could do for the homeless man/woman since everyone was struggling. Now, a homeless man asks for money next to a commercial district where prices are for the middle class and everyone acts as though the man (an by extension the issues of poverty and gentrification) does not exist. In addition to the homelessness, it was somewhat pleasing for me to see some walls filled with unwanted graffiti. It represented some sort of metaphorical protest that despite city officials’ attempts to erase the neighborhood of the past, that neighborhood is still there.

All in all, the tour made me fearful of gentrification. It is no secret that the city of Washington, D.C. is in a process of “redevelopment,” however, what terrifies me is the people who will eventually lose their homes, businesses, and eventually hometown without any where else to go. It does not do justice to the past by simply having plaques on buildings and labeling them historic but not having the people who were part of that history represented. This is what I saw on Logan Circle and Dupont Circle and it is happening in the rest of DC.